Trending
You are at:Home»Reviews»Alfa Romeo Giulia review
By Michael Sheridan on 11/05/2017 Reviews 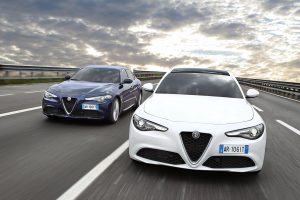 After a long break Alfa Romeo wants to win back the hearts of its abandoned 159 owners.

Giulia is a rear wheel drive five seater that is gunning for the class leading BMW 3 Series, Audi A4 and Mercedes-Benz C Class. In truth, it is starting from zero! There are loads of machines already established ahead of it so should we even take a second look at the Italian… after all it was Alfa broke up with us?

There is a famous motoring cliché that states “you’re not a real petrol head until you’ve owned an Alfa”. This is true for the older generation as Alfas offered involving driving when everyone else offered boring machines. There was a passion from Alfa that owners loved to buy in to. But over the years Alfa’s spark dimmed. Buyers simply got fed up with bad build and wanted reliability – something seldom delivered by Alfa Romeo. Alfa GTVs, Sprints and ‘Suds’ were brilliant but infuriating. They dissolved when it rained and were utterly frustrating to own. Alfa lost the trust of buyers as the mainstream manufacturers delivered better cars with increased design flare. The 159 followed on from the ground breaking 156. 159 was a handsome beast (still is!) but its replacement was shelved when the recent downturn hit. Now that the FCA group is in a healthier state, I don’t know how they do it but thankfully the Giulia got the go ahead and the result is a stunning compact executive machine. Giulia has to be good if it is to stand a chance of romancing buyers back to the brand and more importantly get fleet companies to approve it again for use as a company car. On the surface the world of fleet buying and operation is boring but without experts giving their approval of the Giulia… Alfa may as well pack up. Thankfully the new car is darn good!

The exterior is a gentle evolution of the 159 – Alfa just dusted off its shelved 159 mk.2 plans if you ask me, but the result is a really handsome car. Its 4,643mm long, 1,860mm wide, 1,436 tall and has a wheelbase that is 2,820mm long. The boot holds a respectable 480 litres. FCA Ireland is importing just automatic versions and while this seems a little odd, it isn’t at all. The 8-speed ZF auto is smooth and economical too (shouldn’t be an Alfa priority but it is a fleet one) and lets the driver feel that bit more premium behind the brilliant steering. Giulia has a really tight steering rack so a little input gets a big result. The turning circle is 10.8 meters. Fast gearing, similar to the Mazda MX-5 is the key driving dynamic with Giulia that makes it more interesting to take down twisty roads than any other car in its class.

Entry grade is called Giulia, next is Super then comes Super Sport (my test car this week) and Super Lux – that does what it says on the tin and a range topping Veloce that has just been added to the Ireland range. Super Sport gets massive steering column mounted (not steering wheel) paddle shifters. This gives the enthusiastic driver the chance to select the gear they want to exit a corner and keep both hands on the steering wheel. As you’d expect safety features and driving aids like AEB (autonomous emergency braking) feature. The car starts at a competitive €39,995 and offers more standard fitted stuff than its main rivals. Super Sport starts from €42,166. Engines for Ireland are limited to turbo petrol and turbo diesel. My Super Sport has the 180hp diesel while the standard car gets a 150hp version of the same 2.2 litre. A 2 litre petrol pushes out 200hp and then there is the range topping Quadrifoglio.

I’ve been lucky enough to race the BMW M3 (€104,526) rivalling ‘Quadrifoglio’ Giuila (€99,945) around Alfa’s test track in Italy and it is so incredibly easy to use – speaking as a mere mortal not a freak show talented race driver. 510hp/600nm of easy to use power comes from the 2.9 litre V6 Bi-Turbo petrol machine. 0-100kph takes just 3.9 seconds. The QF is great grin inducing fun to drive. There is a trick manual available also instead of the auto that allows you keep your accelerator planted while shift the gear lever with out having to touch the clutch.

The great news is that Giulia is a fun car to drive and this is what BMW 3, Audi A4, Mercedes-Benz C Class and Jaguar XE drivers want. What will hold the Giulia back is trust and a dealer network that is simply not big enough (yet) to compete with the big boys and really push the car… no lazy archive pun intended.

Alfa Romeo with 4C showed that there was life in the old dog yet and now Giulia deserves our attention too. (My 2014 4C test car) 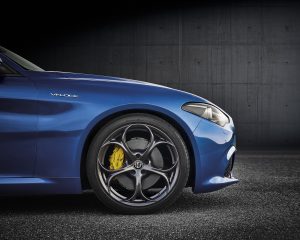 So can the romance between petrol heads and Alfa be rekindled?

“Okay Alfa I will go out on a date with you… again!”