Trending
You are at:Home»Reviews»Alfa Romeo Stelvio review
By Michael Sheridan on 22/12/2017 Reviews 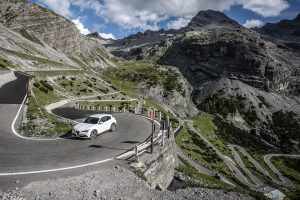 Every Alfa Romeo review starts with a tired cliché about reliability – so lets just skip that part. Stelvio, to petrol-heads anyway, is synonymous with the famous mountain pass that links Italy and Switzerland. I’ve been lucky enough to have driven this route many a time and can say in the right car or motorcycle it etches a massive grin on your face.

Twisty mountain roads and a tall SUV isn’t an ideal combination but Alfa wants to inspire buyers into believing an SUV can be as thrilling as a low slung sportscar. Look, physics always wins and the Stelvio with its high centre of gravity can’t be as much fun as a machine nearer to the ground… can it? 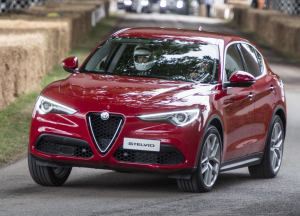 The FCA owned Italian firm’s new mid-sized SUV is causing a bit of a stir. The underpinnings are shared with the Giulia saloon and like the rear wheel drive saloon Stelvio has sporty overtones. The simple fact you can buy one with the same 510hp V6 from the Giulia Quadrifoglio is the main headline grabber. With the QF it is a case of watch your backs Porsche Macan, BMW X3 40i and Audi RS Q5 as the 510hp as Stelvio wins top trumps for power. Alfa claims class leading power to weight ratios and all the usual performance mods have been done like using carbon fibre for the prop shafts and weight saving aluminium for many of the body panels, engine and suspension parts. 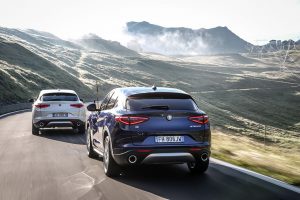 Lesser mortals can still get pretty powerful Italian built Stelvios. My 2 litre petrol powered 280hp/400nm test car is no slouch with 0-100km/h taking 5.7 seconds. Top speed is 230km/h. With those numbers it is fairly thirsty plus Stelvio on all bar the entry diesel version has Alfa’s new ‘Q4’ all wheel drive setup. An auto gearbox (with paddles) is standard also and it is just too tempting to play with all that traction. Alfa says an average of 7l/100km (40mpg) is possible – I got nowhere near it. A 200hp Q4 petrol version is the entry point. Diesel power will remain the popular choice in Ireland. The range uses a 2.2 litre with either 180hp or 210hp with Q4 as standard. The 180 is available in rear wheel drive only. All engines feature the 8 speed ZF sourced automatic gearbox – just like the Giulia. The familiar ‘DNA’ drive selector lets you choose from dynamic, normal or all weather driving modes. Dynamic sharpens the brakes and throttle response and tweaks the traction and stability controls to enable the driver to make sportier progress.

Italian styling is sometimes brilliant and it is almost sacrilege to criticise it but Stelvio looks a little plump despite weighing less than 1.7 tonnes. Even my level 3 (Milano) test car with its 20 inch alloys and twin exhausts looked a little hefty. For an SUV there is surprisingly little ground clearance and little in the way of off-road styling. Stelvio is clearly more a car based crossover than SUV in the Land Rover Defender sense. Stelvio’s massive grill is pure Alfa and can be seen from space! The front number plate has to be mounted offset – a flashback to the 156. In size terms the Italian sits in between the slightly larger BMW X3 and Audi Q5. 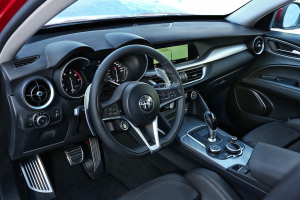 Inside the cabin, the five-seater is basically a clone of the Giulia. Its very comfy and you can select from a range of trims including a black and red leather interior option that is classic Italian and overtly bold. The five door is quite practical too with a good sized 525 litres boot. The tailgate is powered too.

On the road the Stelvio is sharp and corners more like a saloon than a compromised high riding machine.

The Q4 all wheel drive system sends 100% of the engine’s power to the rear wheels in normal conditions. If things get slippy the Q4 system will split the power 50/50 between the front and rear axles. The brakes were effective but felt a little spongy and required too much effort especially at low speed. Stelvio has beautiful steering that is geared for road use. A little input goes a long way and this makes it a nice driver’s car.

The Stelvio turned quite a few heads while on test and was an enjoyable machine to live with. I first saw a disguised Stelvio at Alfa’s test track in Italy while I was testing the Giulia Quadrifoglio. The very thought of an Alfa SUV at the time was shocking but as we’ve all seen in the last 12 months – the world has simply gone SUV crazy. Alfa Romeo needs Stelvio to be a success and there is no doubt it will be carried along on the crest of the SUV wave. The big trouble is Merc, BMW, Audi etc. all have skin in the game. There is a ridiculous amount of choice in the premium SUV sector. Take a deep breath: GLC, XC60, X3, Q5, Velar, Discovery Sport, NX, F-Pace – the list of lovely stuff goes on and on. What a nice first world problem hey! 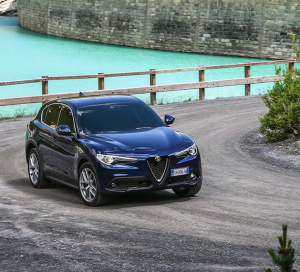 Sadly, I must give in to another Alfa cliché and remind potential buyers that its easy to commit to an Alfa Romeo with your heart – its convincing your head that’s the problem.