Trending
You are at:Home»Reviews»Another Swift Hatchback review
By Michael Sheridan on 04/05/2017 Reviews 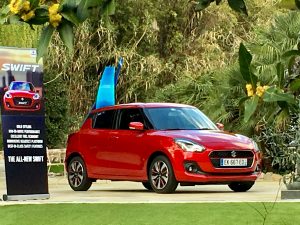 The little Suzuki Swift is a global seller and it truly deserves its success.

To date over 5.4 million have been sold, in Ireland its share is a good deal smaller but the supermini is much loved. In 2016 Suzuki Ireland grew by 4.3% and reached 20th in the new car market. Suzuki has some great small cars and Swift slots in between the cool Ignis and value for money larger Baleno. The Swift’s asking price reflects this position. The latest Swift is only available in right hand drive in five door hatchback guise, the poorer selling three door has been axed. Sitting on a new platform Swift has an exterior that has evolved from the cute and curvy outgoing car that was a firm favourite at Motorhub Towers.
Exterior the European Swift differs from the domestic Japanese market’s Swift despite being built there. It’s a broader car with a 40mm wider track. Styling is sharper with a lower sloping roofline and blackened pillars to give a floating roof illusion. Overall the Swift is more new Nissan Micra than Citroen C3, it takes a bit of getting used to but you quickly warm to it. 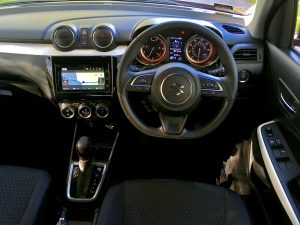 Interior space has been upped and the front seats moved further apart to give lots of shoulder room. The dash has been reworked and is well packaged, there is the lack of soft touch dash surfaces that are appearing more and more in small cars. Rear space is perfect for two adults or three kids. There is ample head and shoulder room and I was able to comfortably sit behind my own seat position. The new Heartect platform, that Baleno shares too, means a longer floor and boot capacity is up by 25% to 265 litres, but remarkably the amount of road the front wheel drive car takes up has hardly increased, in fact Swift’s overall length is now 10mm shorter than the old car at 3,840mm. 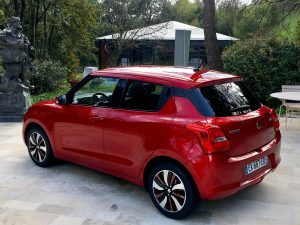 Suzuki has managed to lose 120kgs from an already lightweight car. The new 890kgs Swift really does makes swift progress. The ride is very comfortable thanks to European tuned suspension and steering plus an extended wheelbase that now stretches to 2,450mm (+20mm). The Swift features an even tighter turning circle also and this makes urban use easy. Swift’s new variable geared steering is well geared and effortless to use. There is even some actual ‘steering feel’ to be had when pressing on. Swift uses conventional small car suspension so there is a torsion beam axle at the rear.

Under the bonnet power comes petrol only. The star engine is Suzuki’s excellent 3 cylinder 1 litre Boosterjet. It delivers 111hp and 170nm of torque, while the 1.2 litre Dualjet four cylinder, that powers the entry point SV3 model, pushes out 90hp and 120nm of torque. The mid grade SV-T gets both engines with a parallel mild hybrid system badged SHVS Small Hybrid Vehicle by Suzuki. The same system is available with Baleno and Ignis but not with the 1.2 litre engine. A small rechargeable lithium Ion battery pack sits underneath the passenger’s seat and a clever integrated starter generator (ISG) in the engine bay, takes the workload way from the car’s 12 volt battery and starter motor. The conventional starter motor is only used to start the car from cold. The mild hybrid system adds only 6.5kgs in total to the car’s weight. An AWD Swift is available and is unlikely to sell well in Ireland. The 4WD AllGrip Auto Swift uses a viscous coupling to distribute power between the front and rear axles and is available with the Dualjet 1.2 SHVS model only. 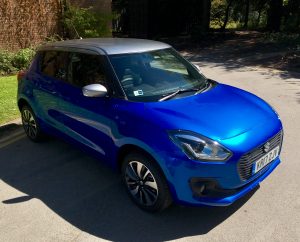 The three cylinder turbo is a terrific engine with 0-100kph taking just 10.6 seconds (10 seconds automatic) – seriously it feels a lot faster! The turbo is bolted to the engine to let it spin up sooner and there is really impressive low end pulling power. Swift lives up to its name and 111hp feels more like 130hp. On the motorway it cruises quietly and will fill the mirrors of larger cars effortlessly if required. On twisty roads the Swift is fun and drives predictably. Credit goes to the team that used UK and German roads to tune the shock absorbers for European tastes. NVH noise vibration harshness levels in Swift are on par with the best in class. 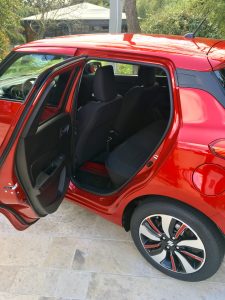 The five door hatchback is available in three familiar Suzuki grades; SV3, SVT and SV5. The standard level of equipment is good with six airbags, leather steering wheel, DAB radio, daytime running lights, Bluetooth, air conditioning and rear privacy glass. 10 exterior colours, including three two tone body/roof options are available and there are some personalisation options too for exterior and interior trim. SV-T will be the volume selling grade and along with SV5 features Apple CarPlay and Android Auto phone connectivity displayed through a centre tablet like touch screen. The entry SV3 model loses the tablet display and gets an integrated CD stereo instead.
The safest Swift is the most expensive SV5 version. It has a host of the current crop of driver aids that will help mitigate or in some cases completely avoid collisions. Under the Suzuki banner of Total Effective Control Technology (TECH) buyers of the standard car get ESP and a strong bodyshell that should perform well in crash tests but it’s only the SV5 that gets the good stuff. Advanced Forward Detection System combines a windscreen mounted single lense camera and a laser sensor to detect potential collisions and can intervene using autonomous braking if necessary. Lane departure warning features also utilising millimetre-wave radar. The Weaving Alert function caught our eye as it spots potential tiredness and alerts the driver both visually and audibly if they are straying within their lane. Adaptive cruise control, headlight high beam assist and dual sensor brake support – that primes the brakes in an imminent collision situation, again are star features only in the top level Swift.
In Ireland Vitara is the big seller for Suzuki at over 50% with the Swift accounting for about 10%. Suzuki Swift goes on sale in Ireland at the start of June with pricing starting from €14,995 rising to €16,995 for the mid grade. €18,995 gets the top specification FWD car and €20,495 gets you a manual 1.2 AWD Swift that uses an automatically activated four wheel drive system. It supplies extra traction when needed to the rear wheels. There is an excellent conventional automatic available for a €2,000 premium in the SV5 grade only. It is coupled with the Boosterjet engine and it even features paddle shifters and is surprisingly quick and refined too. 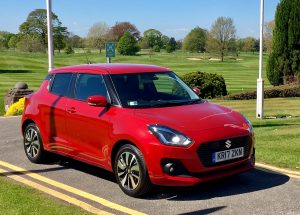 In 2017 Suzuki Ireland hopes to grow its total market through its 23 dealers by 20%, that should work out at about 1,500 units in total. The Swift will go some way towards achieving that goal and Suzuki wants a top 10 spot in its class.
Suzuki Swift is a great little hatchback.