Trending
You are at:Home»News»Ariya hits the high notes
By Michael Sheridan on 15/07/2020 News 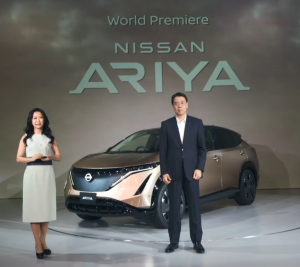 The Ariya is the first all electric crossover from Nissan. This morning an arena just a stone’s throw from Nissan’s HQ in Yokohama was the global press launch location for the production ready EV. “We created the Nissan Ariya as an answer to the aspirations and practical needs of today’s customers,” said Nissan CEO Makoto Uchida. “Combining our strengths in EVs and crossovers, it’s a showcase for Nissan’s new era of excitement and design.” At the ‘Nissan Next’ event Makoto Uchida said Ariya is “A no compromise car” that sets the pace, but he also cautioned that the future is no longer predictable. 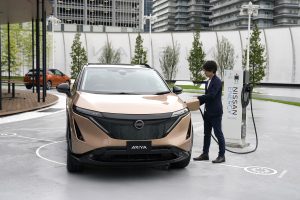 10 years ago Nissan gave us the first mass market electric car, the Leaf. 500K sales later and Nissan says it will put 1m EVs and ‘e-Power’ electrified vehicles on the road every year by the end of 2023. SUV crossovers are the flavour of the month and Nissan’s boss said the Ariya is “the right car at the right time”. Human-centric technologies are at the core of the firm and the Ariya will feature the latest in connectivity and automation. The next generation ProPilot semi autonomous driving system will feature as will Amazon’s Alexa. The car’s voice system will allow owners interact with their car or home from the car or their home! Using data owners will be able to turn on or off smart devices at home with a command from inside the car. “Ariya is more than a car – it is a new chapter and language”. 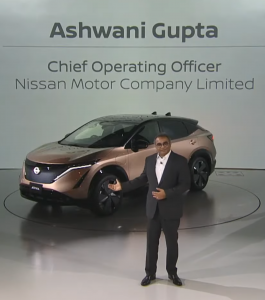 While the car’s styling brings to mind a couple of rival brand’s machines (cough C-HR/2008 cough), inside the cabin is full of digital displays, touch screens, flush surfaces and buttons. Nissan’s COO Ashwani Gupta was next on stage and after he awkwardly ran his finger along the font of the car told us that the car was beautiful among many other superlatives. The cabin is like ‘a cafe lounge’ (on a spaceship) – sorry what! We motoring journalists love being told what to think – especially by administrators. Whether the Ariya is “a true force of wonder” we’ll have to have a chat with Mr. Gupta and his script writer about that at some stage. Just as I was about to demand Nissan wheel out some flamboyant designers saying ‘dynamic’ at least seventeen times… it did! They were allowed to chat about the car’s design after the big wigs finished their speeches and thankfully the classic buzz phrases were back e.g. “the magic flying carpet” and “clean surfaces” etc. Lockdown hairstyles aside the designers have done a striking job. Ariya looks quite technical and makes a strong statement. The electrified arm of Nissan has its own design language with clean lines and strong surfaces everywhere you look. Inside simple clean dash lines marry well with lots of high tech… but it is still a car! 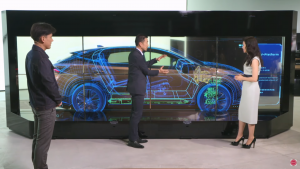 The Ariya’s stats are impressive. It is quick with 0-100km/h taking just 5.1 seconds. The Ariya is functional and rated to tow 1500kgs. The new EV platform offers a number of passenger capacity options and we can expect D segment space in a C segment vehicle. Its estimated maximum driving range is 500km (WLTP). e-Pedal (virtually ‘one pedal’ driving operation) and ProPilot 2.0 are just a couple of things that will ensure the Ariya will be effortless to use. Over the air software updates will feature too and as you’d imagine the car is stuffed with the latest toys abd safety features. 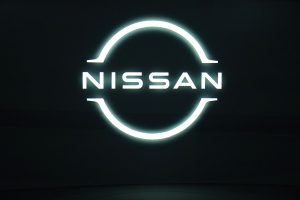 Nissan also launched its new logo and said it was “Futuristic and connect to Nissan’s rich heritage”
Nissan sees a future beyond traffic jams and pollution… and cars that will enrich your life.

Two wheel drive (single motor) and all wheel drive (twin motor) ‘e-4orce’ models will be available. Both will have a choice of battery size either a 63kWh or 87kWh. The battery features a new water cooling system. At a rapid charger you can get up to 375km of range in just 30 minutes. 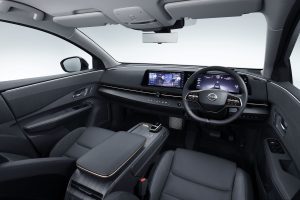 Nissan is busy and intends to roll out 12 new models in the next 18 months including Ariya. The car can be pre-ordered from January next arriving in Ireland in the Autumn.

We’ll have to test it before we can fully sing Ariya’s praises (see what we did there!) – so for now we’ll give the last word to Nissan CEO Makoto Uchida “For us this vehicle is the future”.