Trending
You are at:Home»Reviews»Audi A1 ‘citycarver’ review
By Michael Sheridan on 03/08/2020 Reviews 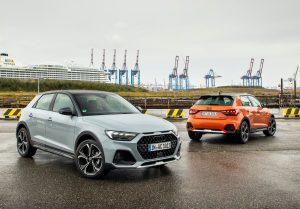 Audi’s smallest car is the five-door A1 supermini. Initially seen as a rival for the MINI the 2010 first generation A1 came in three and five-door (Sportback) guises. The cute three-door was dropped for the second generation machine in 2018. The latest evolution of Audi’s baby is the A1 citycarver. Basically it is a crossover version of the Sportback but at a premium price. 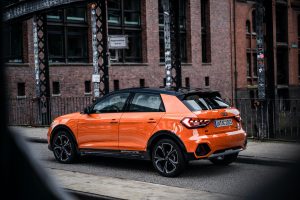 The front wheel drive Citycarver offers a more elevated driving position thanks to a taller ride height of circa 50mm over the Sportback. A big wheel/tyre combination and altered suspension deliver the elevation that should make mounting a kerb that bit easier. The only other noticeable nod to the SUV genre are the car’s chunky extended wheel arches, faux skid plates and chunky grille styling. The taller stance delivers a softer more compliant ride quality. The citycarver may be some 40kgs heavier than the Sportback but we think it looks more handsome. The crossover has very good street presence but most of all has that four ring badge. 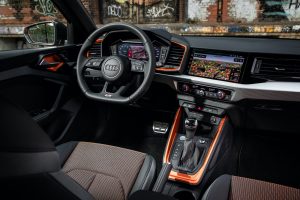 Inside the cabin it is very well appointed. Materials used look the part but on closer inspection are quite average for the class. The dash layout is as you’d expect from a premium car maker – impressive. Our automatic test car proved very easy to use with light controls and direct steering. We had an awesome Audi sound system (€287 optional extra) that really delivered the premium experience most of all. Our digital cockpit seemed unnecessary in a car this size and in truth didn’t impress as much as it does in larger Audis. The dash layout with its large touch screen display continues Audi’s flush surfacing styling that makes them so nice to be in. But if you’re feeling a bit grumpy and looking to justify the car’s relatively high asking price next to the current crop of small hatchbacks the citycarver loses some of its charm. In fact I spent a lot of time thinking potential buyers would be be better off in many ways with a Skoda Scala… but the fickle badge snob consumer in me kept saying the Skoda doesn’t have Audi’s coveted badge. Notable rivals like the Ford Fiesta Active or class size bigger KIA XCeed – both offer better value for money. 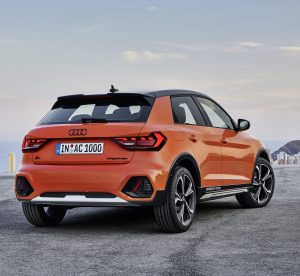 As a people carrier the citycarver can take five people at a squeeze. The boot holds 335 litres. When the back seats are folded down there is up to 1,090 litres of cargo space. Under the boot floor you’ll find a tyre inflation kit. Our ’30’ TFSI test car sounds like a beast but is in fact powered by a 1 litre three cylinder turbo that pushes out a modest 116hp and 200nm. The petrol engine is quite punchy and responsive. Our car had selectable drive modes (Drive Select €300 option) but we left it in auto as most buyers will do too. 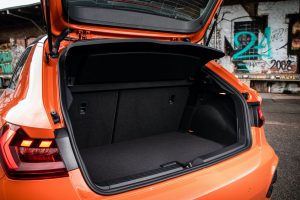 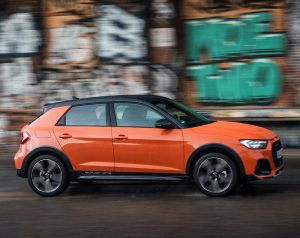 Knock the price down a bit and the A1 citycarver makes sense. It is a compact car that works well in an urban environment but can take on longer journeys too. Motor-sport fans and more mature drivers will appreciate the nod in styling to the awesome S1 rally car. Most buyers will just see a nicely proportioned and smart looking Audi. Personally? I’d prefer a Q2 (from €30,645).