Trending
You are at:Home»Reviews»Audi A4 review
By Michael Sheridan on 24/01/2020 Reviews 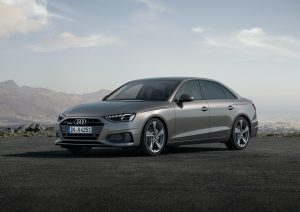 The popular Audi A4 has been heavily tweaked to breath a bit of life in to a compact premium car market under threat. The changes from the 2016 model include LED headlights, a new MMI, mild hybrid technology introduced under the bonnet and other engine improvements. Despite class leading sales in Ireland the new A4 has a tough task to beat off the serious competition from BMW’s 3 Series and the Mercedes-Benz C Class as both have upped their game. 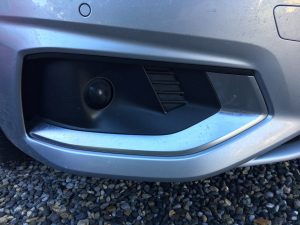 Styling changes include new beefy creases in the bodywork above the wheel arches. The all important grille gets a makeover plus there are revisions to A4’s light clusters. The A4 has presence on the road and that’s its best selling point. A few things niggled at us though, like the disproportionate amount of black plastic surrounding our SE test car’s front fog lamps. The rear clusters are connected by a chrome strip that is a nice touch. Two grades feature SE and S Line with a streamlined options list. 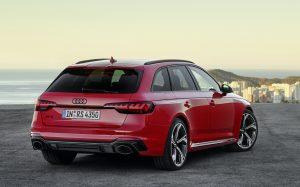 Inside, changes to the five seat saloon see a new MMI infotainment set up that frees up a bit of console space. Depending on specification a digital virtual cockpit is available, Android Auto allows its phone users to download a key for the car to their phones. 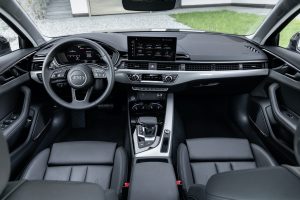 A really interesting bit of kit that can save time in traffic comes courtesy of Audi’s new car-to-X communication ability. Audi’s ‘green light prediction’ system can ease you through urban traffic by advising on the speed you need to travel at to maximise your chance of catching green lights. Sadly my SE grade test car was low on gadgetry, cool technology and as a result left me underwhelmed.

Having to connect a phone to a premium car with just bluetooth is unacceptable these days. Even playing music from my phone was a hit an miss affair of will it wont it connect. Premium should never draw attention to itself and sadly my test car got on my wrong side quite quickly. 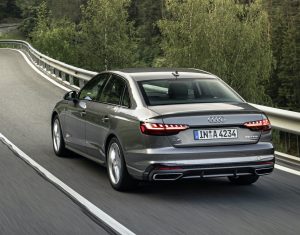 My SE model had optional sports suspension (€488) fitted and while this adds to spirited driving situations it simply made the ride too harsh. Another by product was it made the cabin noisy with intrusive tyre and road noise. An SE should be comfy first and foremost. ‘If I want a sportier A4 I’ll get a S Line’. The SE’s interior layout is pure Audi and in this grade slightly dull. The SE doesn’t get the digital driver’s display (that is brilliant) and this omission makes the A4 experience quite ordinary behind the wheel. Of course higher grade cars can have loads of impressive kit, it is just a shame the lower models don’t jump out as special. This leaves owners to enjoy just the exterior styling. The cabin is spacious enough. Rear headroom is reasonable and legroom is good. There is seating for five but four adults fit best. The rear centre seat is narrow and compromised with a transmission tunnel space stealing foot room. Under the boot floor of our 35TFSI a 12 volt mild hybrid system takes up much of the space a spare wheel would have used leaving you with a puncture repair kit and some ugly non carpeted space.

Front wheel drive and Quattro all wheel drive versions are available. Manual and S-tronic auto gearbox feature too. Petrol and diesel engines make up the initial engine range in Ireland. Five of the six engines in the range have a two litre displacement. 12 volt mild hybrid petrol power has made the TFSI engines more fuel efficient. Power output starts at 150hp (35 TFSI), followed by 200hp (45 TFSI) right up to 240hp (55 TFSI). 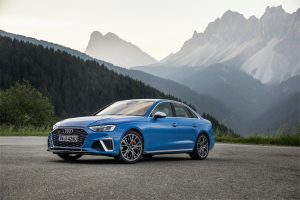 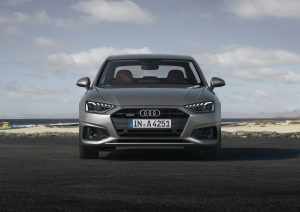 On the road our 2 litre 150hp 35TFSI S-tronic with the optional sports suspension didn’t quite deliver the smooth and comfortable ride a premium car should. On twisty routes the car did feel fluid and balanced. When moving off from a standstill with any sort or urgency wheel spin happens all too easily and we spent a lot of time longing for a quattro traction. 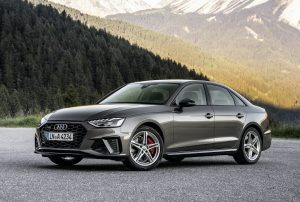