Trending
You are at:Home»News»Baby Camper
By Michael Sheridan on 30/07/2020 News 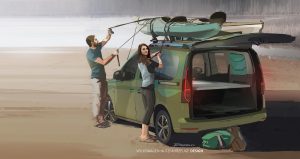 These are the first images for the successor to the Volkswagen Caddy Beach… its so cute!

The new Mini-camper from VW’s commercial vehicles division is based on the revamped 5th generation of the Caddy. There are a whole host of new features including an entirely new bed concept that has been redeveloped to offer greater versatility. VWCV says technology in the compact camper van is state-of-the-art… and ‘a touch of romance is also included, with the panorama glass roof offering a night under the stars’. Steady!
Since 2005, Volkswagen Commercial Vehicles has been selling a compact mobile home based on the Caddy as a standard production model. VWCV says ‘The small brother of the California is an absolute all-rounder for the young family, sport and hobby users or the group known as “best agers”. In short, it is intended for all who seek maximum flexibility from their car, so that they can embark on the occasional spontaneous micro-adventure.’ 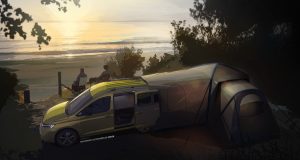 The world premiere of the new compact camper is set to take place virtually at the beginning of September.