Trending
You are at:Home»Reviews»BMW 1 Series review
By Michael Sheridan on 14/11/2019 Reviews 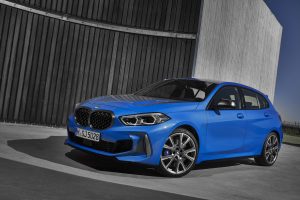 Beemer’s baby has had a quite significant makeover. The third generation 1 Series looks totally different, has grown massively inside too, while under its skin is the biggest change of all. We’ve been putting the all new 1 through its paces. 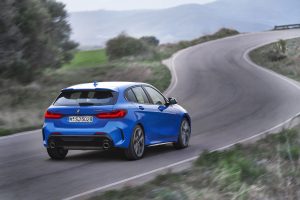 The switch from rear wheel drive to front wheel drive has been coming and has split option. Enthusiasts obviously mourn the demise of a compact car whose steering wheels were separate from its driven wheels. The loss of the nimble and entertaining rear wheel drive set up is the price now paid to make the 1 Series a more practical car. The surprise is the new front wheel drive set up, while different in feel, is still quite fun. When you factor in the gains in terms of space, bad weather traction and practicality the mourning period won’t be that long. 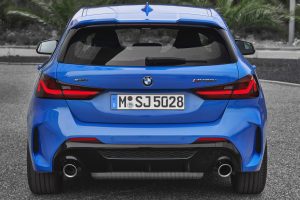 The obvious benefits in terms of cabin space come from not having to have a big transmission tunnel to feed power to the rear wheels from the engine up front. Space that was clogged up down the middle of the cabin’s floor is now free. The new 1 uses the same platform as the big MINI five door and this means the exterior loses its long bonnet and small cabin ‘look’ that we’re used to. The front end has a short and wide bonnet that makes the car look squat and relatively wide. A dominant BMW active grille is hard to avoid and splits option, to my eyes it brings Mr. Potato Head’s lips to mind from Toy Story – just me? New headlight clusters and sculpted bumpers combine to deliver a strong, technical and aggressive styling that is a core styling trait at BMW. At the back the tailgate is more distinctive and far less Hyundai i30 when viewed from a distance. 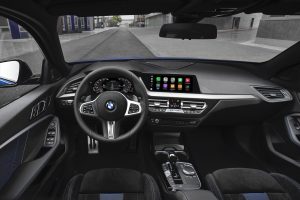 The cabin is a big step up and there are far better materials used. The old 1’s interior was cramped and cheap by any standards in comparison. The old car was a hoot to drive but in nearly every other aspect – was far from premium. Getting in and out was a squeeze and a chore but the new platform delivers 3 Series like space and access is great. There is good separation up front between the driver and passenger while in the rear two adults will fit or three kids. The 1 Series is now a very practical compact hatchback. The dash layout of our 118i M Sport (from €36,755) features the usual BMW dna and is smart, again a vast improvement. 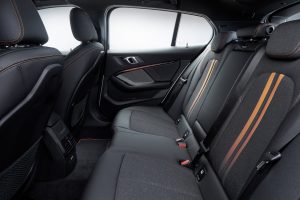 Is it cooler than the dash in the A Class Mercedes-Benz is another question. The boot is good in its class too at 380 litres. A raft of new technology is on hand including BMW’s on-line Live Cockpit Professional and its many free and then subscription services that take advantage of BMW’s version 7.0 operating system. A head up display is available also. Loads of ADAS safety aids are available also as you’d expect. Cruise control with braking function is standard and Active cruise control with Stop & Go is available as an option. 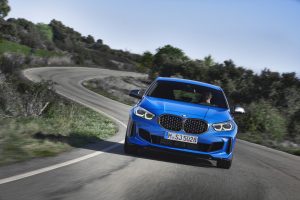 On the road the upgraded six-speed manual gearbox in our test car (standard in 116d from €32,890 SE, 118d & 118i) proved slick and nice to use. Apart from the manual gearbox an optional seven-speed Steptronic dual-clutch transmission can be specified for the 116d and the 118i. The steering is geared well and all the driving controls are light and easy to use. Sport, normal and Eco Pro are the selectable driving modes and their buttons are near the start/stop button next to the gear lever. Cornering the 1 Series feel a little odd at first with its new front wheel drive resistance added to the old car’s nimble steering but after a while you can chuck the car around as you would a MINI. On the open road the 1 has a bigger car feel and kilometres are eaten with ease. Our 1.5 litre petrol engine delivers 140hp and 220nm of torque, 0-100km/h takes 8.5 seconds. The ride feels firm-ish in our M Sport grade and wheel size plays a part here. For an even more sporty 1 experience the 306hp/450nm M135i xDrive (€50,830) from BMW’s M Performance division has a tuned suspension set up and four wheel drive that delivers much livelier performance. 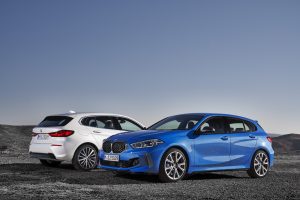