Trending
You are at:Home»Reviews»BMW 2 Series Gran Coupe review
By Michael Sheridan on 26/04/2020 Reviews 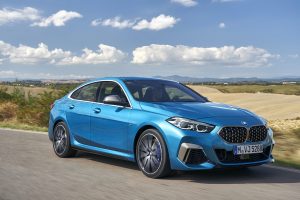 The new BMW 2 Series Gran Coupe is the new kid on the block in the BMW saloon car range. Sitting below the excellent 3 Series in the Bavarian firm’s range, the four door 2 uses the same platform as the large MINI five-door. The 2GC baby saloon Beemer undercuts the 3 Series on price but is comparable for interior space thanks to its floorpan and layout. We went to Lisbon before the lockdown to test the 2 Grand Coupe at its European launch. 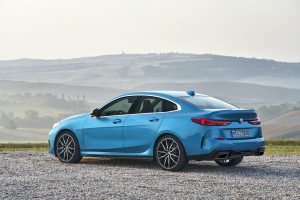 The 2 Series is a complicated and diverse range at the minute with a rear wheel drive two-door Coupe, a MINI based Active Tourer, rear wheel drive two-door Convertible and 5+2 MINI based Gran Tourer. The original rear wheel drive 2 door 2  Series Coupe is a car we love – especially the M2 version, but as with the new BMW 1 series, the new platform means a drastic dynamic change from rear drive to front wheel drive or if you opt for xDrive – all wheel drive. The name Gran Coupe implies notions of grander – but I feel we are being conned a little as the car is really a 1 Series saloon/sedan! The 2GC is 2 Series is chunky and far from ‘3 Series-sleek’. Put the 2GC up against its Mercedes-Benz CLA rival and the difference is very noticeable – so where is the coupe styling appeal? Well if there is any it’s not very obvious, although as a compact saloon it has appeal! The exterior features pillar-less doors – so there’s at least one coupé-ish feature but in every other sense it is as you’d imagine the 1 Series hatch with a ‘notchback’ boot. A high front end with a bold grille and lofty bonnet hints of crossover more than sports car. It is this front end that is the awkward styling issue as my eyes struggle to resolve its styling through to the rear of the car. We tested some beefy versions with M Sport kit at the car’s European launch (before the COVID-19 lockdown) and the car from certain angles grew on us. 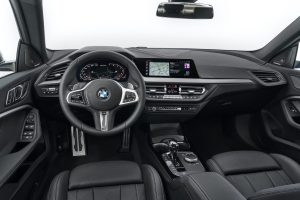 Inside is great. There is tons of space and the layout is straight from the new 1 Series – which is so much better than the rear wheel drive original that was cramped and felt like its position in the range suggested. The driving position is good and the dash layout a familiar friend. The interior with its added width feels impressive and the feeling you get inside is one that suits its premium badge. Headroom is snug in the rear but space is quite good for the class. 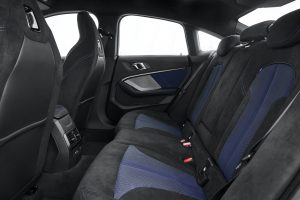 Apart from the exterior the next big talking point is the fact the 2GC is a BMW saloon with front wheel drive! Unless you buy an xDrive version (all wheel drive) BMW drivers are in for a new and surprisingly pleasant experience. This is a bold move from a firm famed for its rear wheel drive saloons. On the roads surrounding a damp Lisbon we were able to enjoy the car’s dynamic ability and often to a greater degree than if we were in a rear wheel drive only car. The level of grip is impressive and the wide track makes the car very stable at all speeds. Tackle a roundabout in a front wheel drive version with any sort of enthusiasm and there is no dramatics. The rear doesn’t try to step out under power. There is just gentle understeer that is communicated clearly to the driver as the limit of available grip comes near. The all wheel drive xDrive of course is even a better performer on the twisty bits. 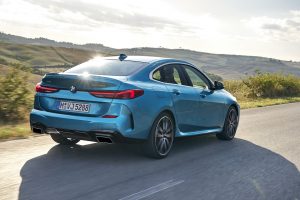 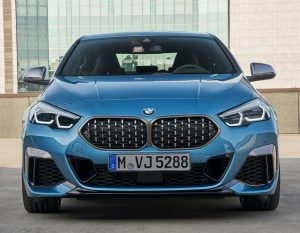 Coupé or not Coupé?
There was a time the word coupé meant was used to describe a sleek two-door version of a four door saloon/sedan but nowadays the coupe name is applied by the motor industry to any slightly altered car or SUV. The word coupé is ultimately derived from the word ‘chop’ and at no time suggests two doors. But, and its a big but, many of us have grown up with all coupés having just two doors and want it to stay that way. 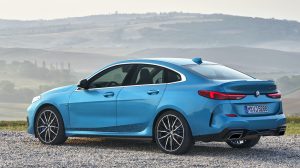 We liked to driving the BMW 2GC more than we liked looking at it – but it is now the most affordable BMW four-door by some margin with pricing from €34,010 (218i). The 2GC will certainly attract a lot of new buyers to the brand.