Trending
You are at:Home»Reviews»BMW 330e review
By Michael Sheridan on 29/03/2020 Reviews 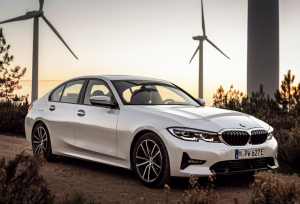 BMW’s 330e is a stealthy premium car with sporty performance. This 3 Series however has an eco bonus above its stable mates as it is a PHEV (plug in hybrid electric vehicle) that can run in zero emissions mode for up to 66 kilometres using its electric motor. 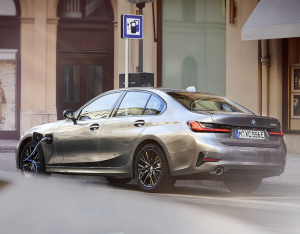 The 330e looks like a regular 3 Series and apart from badging can be spotted by its additional fuel flap on the nearside front wing that conceals the type 2 EV plug charge socket. Under the bonnet the 330e is powered by a combination of a two litre turbocharged petrol engine combined with an electric motor that deliver power to the rear wheels via an eight-speed automatic gearbox. The 330e’s 83kW (113hp) electric motor is powered by a 12kWh (10.4 net) lithium-ion rechargeable battery pack that has increased in size over the last gen car that had a 7.6kW battery. Like most PHEVs there is no fast charging option (CCS/Combo) as the battery is quite small compared to a full EV. 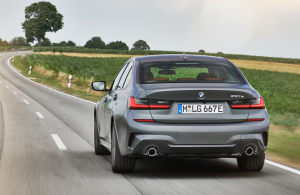 Total power output is quoted at a whopping 292hp and this means the 330e easily trumps the 258hp 330i (petrol) and 265hp 330d (diesel). Up to 420nm of torque is generated with the electric motor generating 292nm of that instantly. The 330e petrol/electric hybrid combination delivers a beautifully balanced traditional 3 Series sporty driving experience. Behind the wheel the sensation is reminiscent of pre xDrive (all wheel drive) 3s. The 330e has great urge and the figures back this up. 0-100km/h takes 5.9 seconds and top speed is 230km/h. The 330e has an overboost function that BMW calls XtraBoost. It delivers maximum system power for up to 10 seconds. 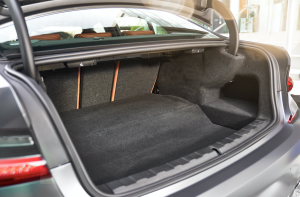 Fuel consumption figures can be as low as 1.8 litres per 100km (156mpg) – when the car is used as intended with a full tank of electricity. In reality we could not get near this figure but at times got close. CO/2 emissions are very low at 35g/km (WLTP) and this slots the 330e in to motor tax band A1. The 330i gets the full PHEV grants of €7,500 off its price and this throws it right at the big selling 320d. The beauty of a PHEV is that users can choose to run in EV mode when the battery is charged. If the battery power is already used up or you didn’t recharge it overnight you can get the engine to charge it up for later use as you drive along using petrol power. There are a number of selectable driving modes such as adaptive, hybrid and electric that do what they say on the tin. 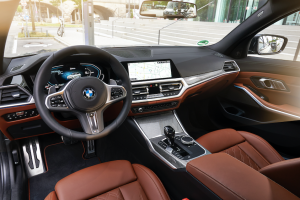 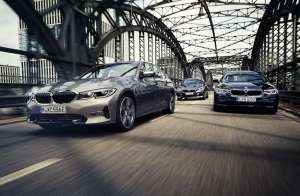 On the road the 330e is enjoyable to drive, refreshingly quite and vibration free thanks to its petrol and electric power combination. When you need to overtake its pick up is truly impressive and spirited. PHEVs offer a degree of future proofing that their engine only variants can’t right now. The ability to do modest mileage in EV only mode is a big plus and something that will become more important especially in built up areas in years to come. The 330e delivers a premium experience for its premium price.