Trending
You are at:Home»Reviews»BMW 4 Series Coupé launch
By Michael Sheridan on 02/06/2020 Reviews 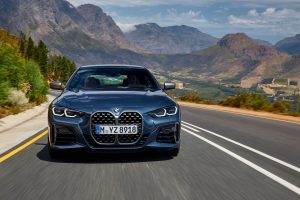 Revised models are coming thick and fast from BMW and the latest model to get a nip and tuck is the second generation 4 Series. A sleek ‘dream machine’ according to BMW the two-door 4 is certainly striking – that grille! We’ve been to its global launch today in Munich – well virtually! 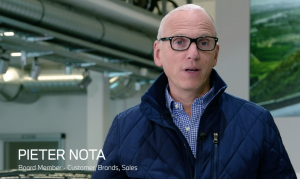 Like the new 5 Series is going a little greener. The 4 Series gets a 48-volt mild hybrid system on its diesels and M440i six cylinder petrol. The system helps deliver reduced emissions and deliver greater engine efficiency. Also the new 4 Series is the first BMW to get access to a specialised M Sport Pro package. 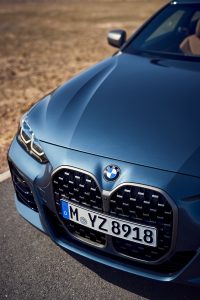 The exterior is lower (6mm), longer (+128mm) and its is wider too by 27mm and its wheelbase has stretched by 41mm to 2,851mm. The wheel track is wider too (+28mm front / 18mm rear) – remember the 4 was the first wide-reared mainstream BMW. The car is slightly taller by 6mm. Okay – that kidney grille! Inspired by recent show cars the new 4 Series certainly will be identifiable to onlookers not to mention in rear-view mirrors. When viewed side-on the 4 looks more curvy with a new window graphic to help the car look sleeker. The 4’s full LED lights are slimmer up front and at the darkened rear LED lamps add a more dynamic look. Adaptive LED Headlights with BMW Laserlight, including BMW’s ‘Selective Beam’ non-dazzling high beam assistant, are cost options. The popular M Sport model grade is available with the new 4 and highlights feature large outer air intakes in the front apron and a sharper rear apron with a diffuser element in high-gloss black. 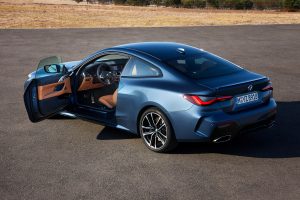 Inside the four seat cabin there is an upgrade. The start/stop button is repositioned in the centre console control panel alongside the newly designed selector lever. Also in that area is the iDrive controller and buttons for the Driving Experience Control switch and electromechanical parking brake. New front sport seats are standard and have contoured side bolsters to provide extra support during hard cornering. All models also include front-seat heating as standard. The Comfort Plus package adds electric motors to the seats. The rear seat backrests split 40:20:40, while boot space is increased to 440 litres. 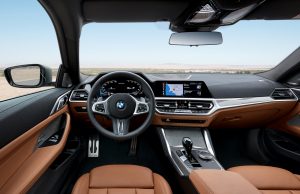 BMW says significant engine advances have been made over the outgoing model. All the petrol and diesel engines belong feature BMW TwinPower Turbo technology. The introduction a 48V starter- generator mild-hybrid system will ensure sharper power delivery combined with reduced fuel consumption and emissions. The range will be spearheaded by a new BMW M440i xDrive Coupé model, which features an in-line six-cylinder petrol engine. The new BMW 4 Series Coupé will also be available with a choice of two four-cylinder petrol units and a four-cylinder diesel from launch. The line-up is set to expand further with the arrival of two straight-six diesel engines scheduled for March 2021.
All the engines link up as standard with the eight-speed Steptronic transmission, which can now be specified with the new optional ‘Sprint’ function. BMW all wheel drive xDrive is also available on the four-cylinder diesel model, while the intelligent all-wheel-drive system features as standard on all six-cylinder variants. 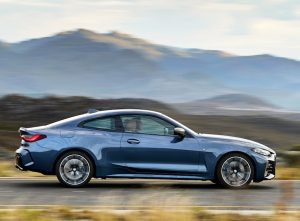 Handling performance is enhanced. BMW says: ‘The new BMW 4 Series Coupé utilises an enhanced version of the 3 Series Saloon chassis to offer improved handling and reinforce its sporting character. An almost completely sealed underbody, improved air flap control and numerous other measures have led to a reduction in drag, reflected in a Cd as low as 0.25 (BMW 420d Coupé). The extra 23 millimetres of track width at the rear axle compared with the new BMW 3 Series Saloon, 50:50 weight distribution and a centre of gravity that is 21 millimetres lower than the Saloon significantly aid agility. 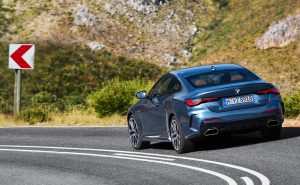 Customers can tailor the driving experience with options that include M Sport suspension, Adaptive M suspension with variable sport steering, M Sport brakes and the M Sport differential’. The body and structure has been stiffened overall too and revised suspension mounts feature. BMW says ‘the design principle of a double-joint spring strut front axle and five-link rear axle offers an outstanding basis for combining precise handling with impressive long-distance comfort. The standard lift-related dampers aid performance and comfort, reducing body movement on bumpy road surfaces as well as improved handling on cornering. Firmer springs and anti-roll bars have been employed to give the new BMW 4 Series Coupé supreme handling characteristics.’ 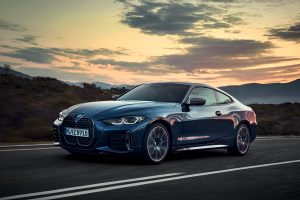 The optional Adaptive M suspension combines all the qualities of M Sport suspension with electronically controlled dampers. Continuously adjustable valves allow the damping force to be metered at each wheel individually and as a function of vehicle load. Switching between the various Driving Experience Control switch modes produces a clearly perceptible variation in the damping characteristics. An extra mode can also be selected using the Driving Experience Control switch on models with Adaptive M suspension. In the ADAPTIVE setting, the steering, damping and accelerator responses along with the Steptronic transmission’s shift characteristics are automatically adjusted to suit the driving style. Electric Power Steering including Servotronic speed-sensitive power assistance is fitted as standard. Variable sport steering, with a ratio that adjusts to changes in the steering angle, is part of the M Sport suspension and Adaptive M suspension set-ups. 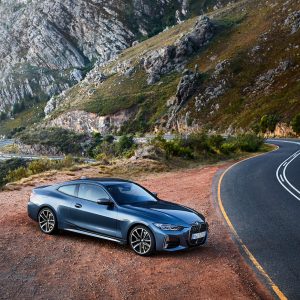 New safety features include the standard fit ‘front collisions warning’. It features collision and person warning with city braking function that can detect vehicles, pedestrians and cyclists. Speed Limit Info, including no-overtaking indicator and the Lane Departure Warning system with lane return by steering assistance, are also standard. BMW’s lates operating system ‘OS7’ will run at the heart of the new coupe’s connectivity.