Trending
You are at:Home»Reviews»BMW 5 Series Touring review
By Michael Sheridan on 19/06/2017 Reviews 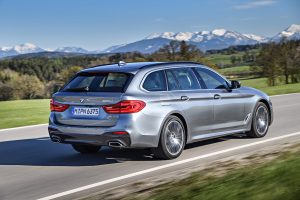 It’s a little known fact that BMW’s 5 Series Touring is a machine designed and built almost exclusively for European buyers. In fact 96 per cent of its sales happen in Europe where the estate is seen in a different light than the US for example.

According to BMW board member Dr. Ian Robertson, the Touring form is seen as more sporty in Europe than in the rest of the world. There is no denying how imposing the new 5 Touring is in the flesh but its also true that we car critics love well thought out estate cars. In Ireland the body form is in fact far from popular. When you factor in the rise of the SUV surely the Touring’s days are numbered. I put this point to Dr. Robertson and he assured me that the 5 Touring will continue to have a future with BMW. 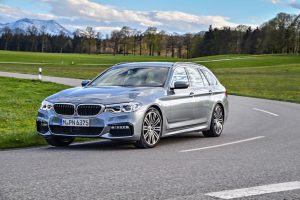 Germany provided the backdrop for our test drives. For a change I left a sunny Ireland to test drive in cold and wet conditions in Munich. The 5 Touring is very handsome and well proportioned, and it needs to be. The class features impressive machines like the Audi A6 Avant, the Mercedes-Benz E Class estate and the Volvo V90 that to my eyes the best looking of the bunch. In Europe estates are big sellers and often are the most popular variant. In Germany, the third largest market for 5 Series, the 5 Touring represents close to 60 per cent of 5 Series sales. In Italy, another big 5 Series market, it is closer to 50 per cent. In Ireland our 10 per cent seems a little low especially where in the UK the 5 Touring represents roughly 30 per cent of 5 Series sales. The jury is out on why Ireland’s buyers don’t buy more estates. It could be the few thousand premium or simply childhood memories of awkward looking estates that looked like a shed was bolted on to the back of a saloon as an afterthought.

First launched in 1991 the 5 Touring has always been a niche player with a hard core following. The new 5 Series (G30) on which it’s based is a premium machine and a technological tour de force. It is already a massive sales hit for BMW and since its launch has out performed the last generation over the same period. The new BMW 5 Series Touring estate is lighter and more spacious than the car it replaces, which sold in excess of 330,000 units globally. The practical one in the 5 Series family has gone to fat shamers and lost the guts of 100kgs. As a rule estate buyers seek load flexibility and carrying capacity. In pure weight terms the new Touring can carry up to 730kgs, that’s 120kgs more than the outgoing version or a rugby prop forward and his kit bag. But with the new estate it is more a case of never mind the quality feel the width. 8mm doesn’t seem like much additional overall girth but the 5 Touring can now take three child seats in the back. The rear seats also split in a very handy 40/20/40 formation. Rear air suspension is now standard, replacing the old entry level’s steel springs. The rear of the car is now self-levelling, so even when the car is weighed down at the back with a full boot or trailer, the car will have a composed and consistent ride height. Rear air suspension is rare in estate cars generally but expected in the premium estate class these days.

The 5 Touring is 36mm longer, 10mm taller and rides on a 7mm longer wheelbase. If space is the final frontier the new 5 Touring wants to conquer it. The boot gains capacity too and can hold 570 litres (+10) up to the load cover and with the rear seats folded down there is a whopping 1,700 litres (+30) of cargo space. I’m sure somewhere in Ireland there are Arthur Daly car dealers thinking that the new 5 Touring would make a better commercial vehicle conversion than the old X5! Joking aside, interior space is very well thought out. 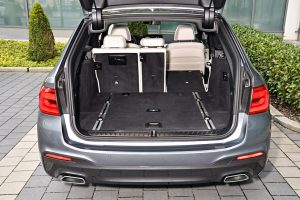 The tailgate features a handy pop-open window that allows access the boot without opening the tailgate. The switch is under the base of the wiper hub and the function provides very handy access as the tonneau cover automatically slides up to create an opening.

The feature is great especially if the boot is already stuffed to the gills and you need to throw something extra in or retrieve a kids toy or an overnight ferry bag without disturbing the main load. The tonneau cover and pull up cargo guard net has been redesigned and now comes in two easily removable parts. Each part can be stowed in the car under the boot floor. 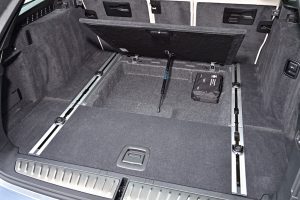 The boot shape has been altered to make improved use of space. You can fit wider loads to the rear of the suspension mounts where there is an additional 220mm of width. The tailgate is powered operated as standard with an optional remote foot swing opening option available. The rear seats are easily folded from the boot automatically with the press of a button. You have to manually put them back up. Another button lets you operate the pop out tow hitch. Towing capacity is 2,000kgs.

A great deal of attention has gone into increasing efficiencies. The latest 5 Touring, codenamed G31, is more aerodynamic than the car it replaces by a considerable margin with a cd of .27, down from .31. By slipping through the air the new Touring uses less fuel as it produces less drag. The stop start system has been revised also to aid efficiency and does not always stop the engine when you might expect it to. BMW says in some traffic situations the engine can be more efficient if it is left running rather than switching off and starting up again.

Engine power comes in diesel and petrol guises and all models in Ireland are fitted with an eight speed automatic gearbox. The obvious engine in Ireland will be the tax friendly 520d with its 190hp/400nm, but horse box haulers will enjoy the additional pulling power of the 620nm 530d especially the xDrive version with its AWD on demand traction. The 530d in either RWD or xDrive is a consummate cruiser with 265hp on tap. City and low mileage users could opt for the 252hp petrol powered 530i. It uses a turbocharged 2 litre four cylinder unit. A 340hp/450nm 540xDrive (AWD) tops the petrol range for now with a very brisk 0-100kph time of 5.1 seconds.

I asked Dr. Robertston whether a 530e PHEV (plug in hybrid) Touring was something they were looking at and he said it is a possibility but only if the numbers add up. He pointed out that the development and growth of hybrid was very much down to government incentives, which can be taken away in a flash. Robertson praised the Norwegian model where EVs and Hybrids are actively encouraged by the State. Dr. Robertson told me that the future ten years would still very much be diesel and petrol powered and it was really up to local governments through their tax incentives to dictate how cars in the future will be powered. 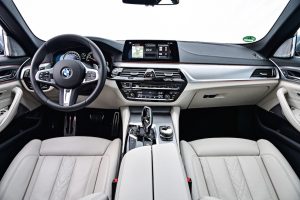 In terms of general specification the Touring gets all the cutting edge equipment that is featured in the saloon 5 Series including semi autonomous driving and great connectivity like the ability to read out your emails. Owners will also enjoy demonstrating the new 5’s party trick of hands free gesture control from the 7 Series. What the manual says you can control using simple hand gestures and the reality can be, in my experience, comical at times. On a more serious note all the latest electronic driving safety aids are available to help avoid collisions and keep you on track.

The fit and finish is excellent and the cabin features the saloon’s layered dash with multiple materials and finishes available to divide up three distinct levels. The new and impressive widescreen centre display is a nice touch and much needed as there is a lot of technology to interact with through BMW’s latest iDrive controller.

New car handovers at dealerships are being overhauled as it would take hours to talk through all of the technology, features and driving aids in the car. Thankfully on line video tutorials are on hand to help buyers understand the copious amount of technology.

On the road the 5 Series has always been the most driver focused of the premium bunch. You can sling a 5 Series about the place with confidence and if you wish, especially in the xDrive versions corner at speeds that will let you rearrange your internal organs, but for most buyers that’s not the point as ride comfort is paramount. On the autobahn and roads of Bavaria the 5 Touring was a luxurious performer. BMW’s 5 Touring manages to provide a composed ride while also facilitating more spirited driving. Dynamic damper control (DDC) is optional and it allows you set the stiffness of the suspension. Active steering is another optional that changes the amount of steering input needed depending on your speed. The slower you go the sharper the steering reacts and vice versa, so at high speed you can safely sneeze without radically altering course. M Sport suspension is available when xDrive is fitted. 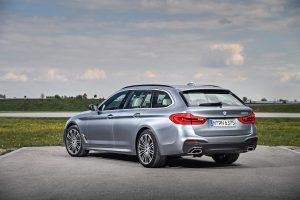 Estate car buyers are generally a very well informed bunch that as a rule make a more committed purchase. The BMW 5 Series Touring ticks all the boxes.