Trending
You are at:Home»Reviews»BMW 6 Series Gran Turismo review
By Michael Sheridan on 11/11/2017 Reviews 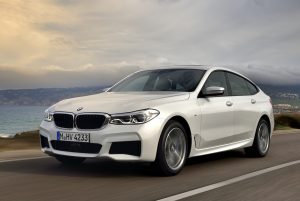 Large hatchbacks have never been popular in Ireland or the UK for that matter. So what chance has the new BMW 6GT? Find out – as we’ve driven it.

In Europe there is a place for large cars that on paper at least make a lot of sense. This explains BMW’s persistence with the hatchback body form with its new 6 Series GT. The large five door is the successor to the 5 GT that was a quirky machine that carried the 5 Series name but was built on a 7 Series platform. Confused, don’t be. 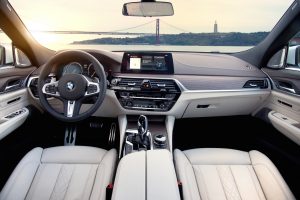 The 5 GT was loved by chauffeurs thanks to its vast interior space and 7 Series like driving experience, but its main appeal was the price point as it was far more affordable then BMW’s flagship saloon. The BMW 5 GT’s biggest problem was its awkward styling. The front was almost SUV like but from the drivers door rearwards it was a challenging machine. Despite its clever twin door boot that could open as a hatch of conventional boot the car still looked like it had been shunted up the rear by a bus. 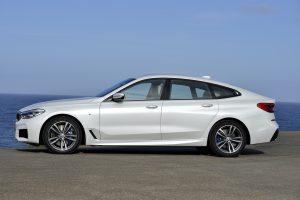 The exterior features a softer, more subtle styling language adapted from the internal BMW mantra ‘precision and poetry’. The boot is vast at 610 litres and there is up to 1,800 litres of cargo space with the seats down.

The roof line is some 20mm lower that the blocky 5GT and up to 40mm lower at the rear to deliver a sleeker and more aerodynamic shape. Up front the latest 5 Series dash features but the car seems wider. The design teams has reworked the door trims to free up more interior space and add to the sense of spaciousness the 6GT clearly delivers on. All of the latest electronics driving aids that are available in the 5 Series are available in the 6GT – including semi autonomous driving (driving assistant plus). Also on the options list are adaptive LED headlights and an ambient lighting pack. An electronic rear spoiler that raises at motorway speeds to aid down-force features too. 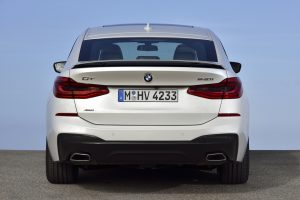 The 3 litre 6GT will be the most popular but at the car’s global launch in Portugal we had just one engine to test the 640i straight six petrol. Air suspension at the rear is standard across the range and full air suspension is optional. The driving experience met our expectation. Adaptive, sport, comfort and eco pro were the available driving modes in the eight speed automatic as per the new 5 Series. The car manages to shrink on the road and is not in the slightest bit intimidating to drive – even on narrow roads. Strangely, at all times you are aware of being in a truly spacious machine. I spent about 60 kilometres travelling in the rear of the 6GT and enjoyed the high seat bench. The seat back reclines slightly via an electronic switch and the 640i featured the wonderfully soft alcantara head restraint pillow bags. Despite the lower roofline I still had plenty of headroom and the ride quality in the back was excellent. 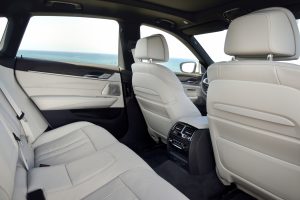 The new BMW 6GT looks far better than the 5GT but sadly the big cruiser will continue to be a niche model and a tiny, albeit exclusive, seller.