Trending
You are at:Home»Reviews»BMW X3 review
By Michael Sheridan on 23/11/2017 Reviews 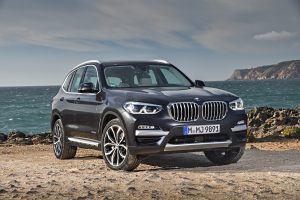 The BMW X3 medium sized SUV has sold in excess of 1.5m examples globally since 2003. Despite huge growth in SUV sales the premium sector remains modest in Ireland.

In 2016, 318 X3 sales trailed the Land Rover Discovery Sport, Volvo XC60 and Audi Q5. At the recent IAA Frankfurt motor show the third generation X3 made a rather quiet debut. Timing was the issue as the five door was surrounded by far more interesting machines from the Bavarian brand. Changes seemed minimal plus it was located near the jaw dropping X7 full size SUV concept that made the X3 look devoid of charisma. Now that the theatre of Frankfurt has died down we can focus on the BMWs we can actually buy. The third generation X3 sits on a new platform and on close inspection has a sharper exterior. The new car’s faux air blades on its flanks are the easiest identifier but other changes are very subtle. The front lights no longer merge with the grille and the tail lights now blend into the tailgate. Conservative buyers will be happy. Elsewhere there are some new creases in the metal, a beefier looking bonnet and a redesigned kidney grille, but the overall shape remains that of a familiar friend. The wheelbase has grown by 50mm and this increase is seen in the larger cabin. The refreshed interior is where buyers will see the most change. The X3 gets a new, layered effect dashboard. Similar to the new 5 Series dash, it is a big step forward in the X3’s design evolution. Inside is quieter too with an impressive cabin ambience. 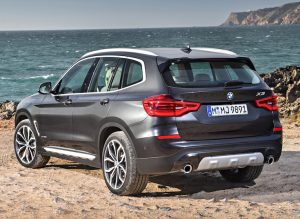 The amount of standard equipment rises and so does the asking price. Initially Ireland will get eight speed automatics paired with xDrive all wheel drive running gear. BMW’s xDrive system has be tailored for the X3 and now delivers a more rear wheel drive bias that enthusiastic drivers will enjoy. At the launch event there was no commitment made to our query concerning future availability of ‘sDrive’ models (2 wheel drive) or manual gearboxes. The range in Ireland starts off with the 2.0d SE from €57,730. This figure represents a big €4,130 price hike over the outgoing model at €53,600. BMW Ireland says the higher asking price is justified by the additional basic equipment that now includes 18 inch alloy wheels, automatic gearbox, LED dipped headlights, air conditioning, automatic tailgate, a bigger digital display and sports steering. Further options are available as part of bundled value for money packs. Some notables include acoustic windscreen and side glass, adaptive LED headlights and a colour head up display. The new 10.2 inch landscape mounted centre touch screen is large and easy to use. It is activated with touch, gesture, voice or with the iDrive controller, there is also a new multifunction steering wheel with a heated option. 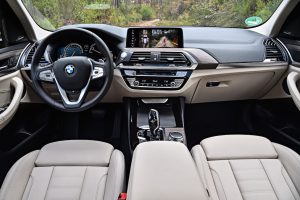 The lack of oddment space in the cabin has been addressed with more storage in the centre console and improved cup holders that sit forward of the iDrive controller. Rear passengers get a more comfortable seating position that is slightly elevated over the outgoing X3. The boot holds a useful 550 litres that is expandable to 1,600 litres. The rear seats split and fold 40/20/40 and they also tilt slightly, allowing up to 60 litres more boot space. The rear seats fold with a remote lever in the boot. There is a handy adaptive fastening system available in the boot also. All X3s get a new twin exhaust tailpipe and new rear light clusters.

As expected a host of new safety and driving aid technologies feature in the new X3. BMW CoPilot includes a driving assistant plus safety package that includes a suite of driving aids such as steering and lane control assistant, lane change assistant, lane keeping assistant and side collision protection. Active cruise control is also part of the CoPilot package. A full color head up display is an option worth getting but otherwise the three model variants do a good job in satisfying most owners needs with SE the entry point, X Line and the M Sport package delivering a slightly meaner and sporty appearance with smart 19 inch alloys and blue painted brake calipers. 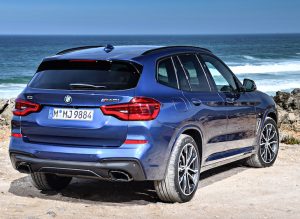 On the road the lighter X3 (-55kgs) has sharpened up dynamically with retuned suspension. It is a slippery car in its class with a very low drag coefficient of 0.29cd. This is due to improved aerodynamics and an active airflap control in the grille that opens or closes depending on the heating or cooling requirements of the engine.

The much desired 50/50 weight distribution goal has been achieved in keeping with BMW’s sporting aspirations. For the first time in a medium sized BMW SUV an M performance model makes it debut. The X3 M40i (€89,880) can now rival the high performance offerings from Mercedes Benz (AMG GLC43) and Audi (SQ5). 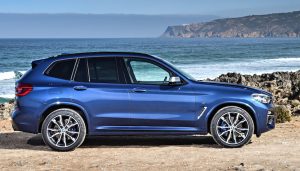 The M40i allows drivers hustle the tall machine about with gusto. 0-100km/h takes 4.8 seconds thanks to a powerful 360hp/500nm motor. The six cylinder petrol powerplant makes the most of the reduced un-sprung mass and revised axle kinematics to deliver, when provoked, a performance orientated drive through its eight speed automatic gearbox. A new active sports exhaust system makes the most delicious sounds under acceleration and deceleration. We took any opportunity to shift quickly up through the automatic’s gears using the paddle shifters and also to lift off the accelerator just to hear the slightly contrived beefy soundtrack. This version is an unlikely seller in the Irish market but the M40i was an enjoyable machine to drive quickly. For mundane driving it can be quite tame too. This particular version of the Spartanburg built X3 is ideal for certain markets like the States where big petrol units are the norm. On national routes and minor roads in and around Lisbon, Portugal the X3 M40i performed with confidence and had no vices. 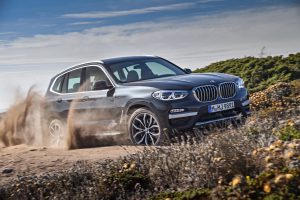 We took to the national park near Sintra to test the only other model available to us, the X3 30d (from €70,040). The X3 climbed and descended some rutted fire trail roads with ease. The car’s ride height cleared ever obstacle and the adjustable hill descent control that electronically controls the speed at which the car travels down a slope, made steep slopes effortless and stress free. Using your left thumb you can set the maximum speed at which you wish to travel via a little rubber dial and the car will brake individual wheels to maintain a controlled descent. We only had a brief on road experience of the big diesel engine but apart from being a little noisy under acceleration, it performed well and had plenty of pulling power. 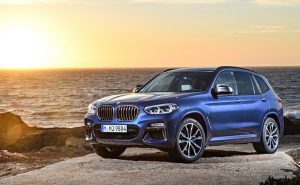 The BMW X3 faces tough competition in an expanding premium SUV class but the new model has significantly upped its game.