Trending
You are at:Home»Reviews»BMW X5 review
By Michael Sheridan on 09/01/2019 Reviews 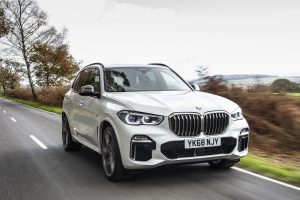 BMW says the Boss is back. At the turn of the century BMW launched the X5, a car that would become the de facto staff car of the middle classes during the boom. The SUV evolved over the years and the third generation ‘F15’ in 2013 brought the option of 7 seats. The latest ‘G5’ fourth generation X5 is no shrinking violet, just look at that enormous active grille, rumour has it an orthodontists may have infiltrated the design team. Imposing styling aside the car is drastically improved inside and out and features a host of impressive driving aids and even a few new party tricks like a heated/cooled cup holder, I kid you not! A truly brilliant party trick is the car’s ability to self-steer in reverse out of sticky situations you’ve driven into, more on that later. 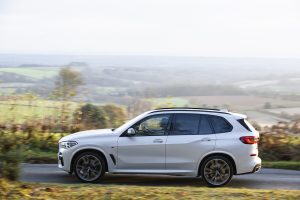 We’ve put the new car through its paces. Taller, wider and longer the new X5 will initially be launched with an engine range of two six cylinder diesels and one 40i petrol. A petrol hybrid version and lower power diesel will come later. X Line,M Sport and M Performance (22 inch alloys) are the grade structures and all models feature xDrive all wheel drive. The big grille, second only in size to the giant BMW X7, serves a purpose. It remains closed when the engine needs to heat up and opens to aid cooling. In the bumper section you’ll find more aero assistance with air blade inlets designed to smooth the airflow around the front wheel arches. On the flanks there are faux gill air vents. There are a few new creases in the metal most noticeably on the rear flanks with a sweeping line through the rear door handle. The new X5 has greater presence but after some off roading the lack of full length doors meant lower legs could easily pick up dirt from the side skirt panels. A fully electric split tailgate reveals a big boot in the five seat version. 40/20/40 is the rear seat fold split and there are release levers in the boot area. Under the boot floor is another cargo space about the size of a spare wheel. 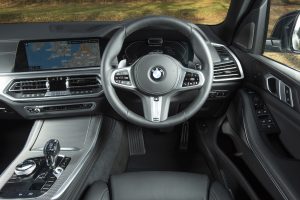 The cabin is redesigned and can be configure with high grade materials depending on how much you want to spend. A crystal automatic gear shifter adds bling to the occasion and new impressive looking touch screens bring the car up to premium standards set by Audi. The cabin seats five in premium comfort. The dash is new and features two large high definition displays one for the driver’s instruments and a 12.3 inch centre touch screen. The rear of the front seats has a slots and connections that can house new touch screen tablet displays or even coat hangers. Gesture control can be used by the front seat passengers to operate some secondary controls e.g. audio system (there are three sound systems available) but the novelty remains a work in progress. Let me put it this way; your average gesticulating Italian would most likely overload the system within moments of starting up! 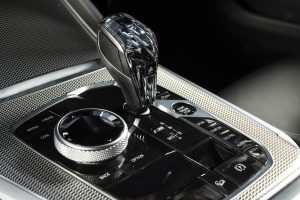 The bigger interactive news is the evolution of BMW’s iDrive interface. In 2015 BMW gave us the iDrive 5 and in 2017 it was updated to an improved iDrive 6 but now that is replace in X5 with BMW’s new ‘operating system 7.0’. Connectivity is vastly improved but the key feature that grabbed our attention is the ability to make a customised driver profile (all your personal settings and preferences) that can be transferred between other BMWs with the same system. BMW continues with its ‘connected drive’ time limited offers (then subscription) that deliver services like Microsoft Office 365, concierge services, remote services (a neat feature is the ability to open and drive the car with a smart phone, you can also share the digital key with others). 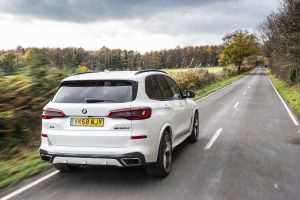 Reversing assistant is the innovation that will keep the X5 talked about for a while at least. Picture a screen where you have to maneuver passed some cars or obstacles to get only to find your self at a dead end or in a bad parking spot. The act of reversing out from that spot can challenge the most skilled driver and here is where BMW takes over and does the hard work for you. A press of the parking assistant button near the gear selector and then a further press of the reversing assistant touch screen button when you engage reverse gear is all you have to do. You use the accelerator and brake as per normal but the car steers itself mimicking the exact steering actions you took for the last tens of metres of your journey. We tried this in a carpark at Goodwood house and deliberately weaved like a snake into a tricky position and then enjoyed the electronic witchcraft that ensued as the car reversed itself like a pro. Exiting a garage or parking place or even reversing back up a country lane need never be feared again. 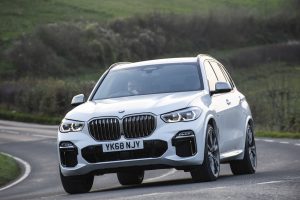 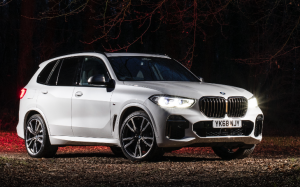 The quad Turbo 3 litre diesel xDrive M50d (from €113,675) is a powerful beast designed to tackle motorways or getaways! The pulling power of 760nm impresses more than its 400hp as it hauls the luxurious sitting room around effortlessly. The straight six engine delivers 0-100km/h in 5.2 seconds and a top speed of 250km/h. You get a commanding view of the road yet sports car like handling, which takes a bit of getting used to. The standard M50d suspension is a unique combination of coil springs with adaptive dampers. All wheel steering and other suspension trickery turn this Chelsea tractor in to a performance car. Like all X5s there are suspension/drive modes to choose from to suit one’s driving mood. In comfort mode the M50d is surprisingly firm and even adaptive mode which scans the surface to optimise the suspension is no better. On anything other than pristine surfaces the ride is a little too harsh on the backside. Massive 22 inch alloys on sports tyres with rubber-band thin sidewalls look great but only come in to their own when spirited driving is the order of the day. Thankfully the new X5’s standard air suspension is an option and one less sporty drivers should opt for. In sport mode the M50d is a hoot. The car can rip up the tarmac with aplomb and when it takes corners it defies the laws of physics. The M50d, apologies for the cliche, corners like its on rails.

The X5 delivers on off road performance: An off road pack features extra under-body protection, a special differential and off road settings to increase drive-ability. 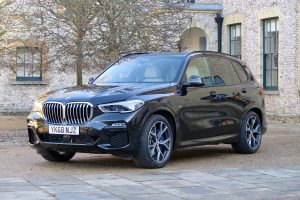 The single turbo 3 litre diesel xDrive30d with 265hp and 620nm will be the big seller. Despite less power it still delivers more than ample zip to entertain and haul its occupants. The 30d’s air suspension works really well and is extremely comfortable. In sport mode the exhaust notes gets fruitier, the suspension drops by 20mm and there is a lovely surge of power when you accelerate hard. The sprint from 0-100km/h takes just 6.5 seconds and top speed is 230km/h. 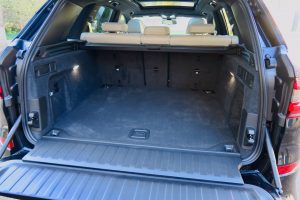 Like a Tesla Model X the new X5 when fitted with the off road pack can memorise various body height settings and the location where they should be used. On the old road from Chichester to London we put the X5 through its paces and enjoyed the range of suspension travel the air suspension offers. In xRock mode it rises 40mm above normal road height and 20mm in the other settings of xSand, xGravel and xSnow. Axle articulation was put to the test and the ease of use in slippery and challenging conditions was astonishing for a premium machine. The off road pack adds a host of traction settings that work extremely well. Hill descent control can like the ride height be set to activate at tagged locations and at different maximum speed settings. This X5 can at last walk the walk – and we were on normal summer tyres! 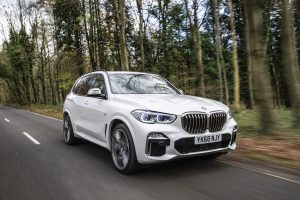 The new BMW X5 is no longer a mere fiscal statement, rather an impressive family car that blends comfort with technology, albeit at a premium price. BMW X5 pricing starts from €88,264 (30d). The Spartanburg built all wheel drive BMW X5 is ready to step out of the shadows in to the limelight at the very top of its class.