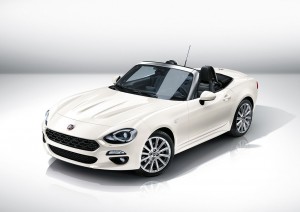 “The sun has got his hat on hip hip hip hooray…” Okay we need to get real – in Ireland the big yellow ball in the sky is a rare thing.

Ireland’s weather is as predictable as a Basset hound (not very) but for some strange reason we still love convertibles in this part of the world. The FIAT 124 Spider is basically a Mazda MX-5 with Italian treatment. Its built in the same plant with the and under-bits as the two seat Mazda but its styling is more retro. There is a nod to the original FIAT 124 Spider’s styling while underneath FIAT has fitted its own engine and tuned the suspension to its taste.

During my test driving I’ve been very conscious of the amount of admiring glances the 124 Spider has got – although the glances could be more of bemusement as I have driven around with the roof down in all weather – even rain! It is only when you stop or slow down that rain gets a chance to enter the cabin as the air flow at speed acts creates a barrier. 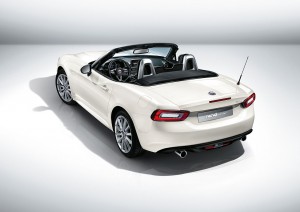 The roof mechanism is a really simple manual operation you can do from the driver’s seat, it helps if you have a strong arm. A lever over your shoulder releases a catch that lets the neatly folded roof pop up a few inches. This allows you grasp it and pull it up and forward into place. A single centrally mounted catch secures the roof in place. 124 Spider is a great looking machine. It has a striking grill and compared to the MX-5 it has a broader bonnet and more elongated rear. From the drivers seat I see more metal in front of me and the car appears to be larger than the Mazda. 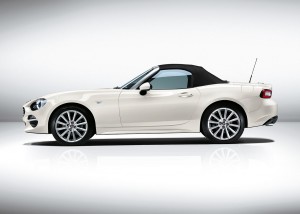 Traditional sportscars, on which the original 1989 Mazda MX-5 was based, featured length ways mounted engines under a long bonnet with power sent to the rear wheels. As the 124 is pretty much an MX-5 it has a similar and wonderful old school driving feel.

You sit very low (older drivers my need to do some stretching or take up yoga) and really feel part of the car. A word of caution for six footers or taller – it will be snug so as with all cars try it for size before you buy. The manual six speed gearbox has a beautiful short throw and the steering is geared to near perfection. The 124 rolls a little in corners but lets you know what is going on at all times. Petrol power requires you to keep the revs up when moving off but the engine’s nature is less rev hungry despite its turbo than the 1.5 litre. 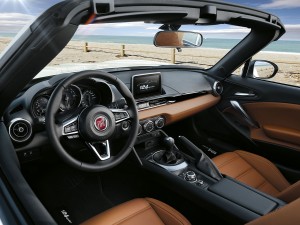 The 124 does a better job of making day to day routine progress. If you do want to drive with gusto FIAT’s turbocharged 1.4 likes to be pushed hard to get the most out of it. 0-100kph takes just 7.5 seconds. You can cruise with ease and relax a little more in the 124 compared to the MX-5. 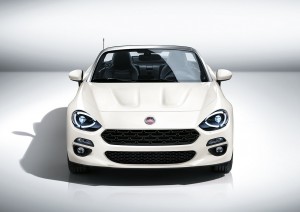 The elephant in the room question? FIAT’s 124 Spider is a lovely machine that has a more substantial appearance than the Mazda MX-5, do I prefer the 124? No, I have too much history with MX-5 having raced one on the track and on ice (I know how lucky I am!). There is no denying the FIAT cuts a serious dash and its different body panels when viewed in the metal turns more heads than the MX-5. I prefer the honesty of the MX-5 and the cheaper price of €27,995 is a bonus. Despite having less power the MX-5 is more fun to drive hard. 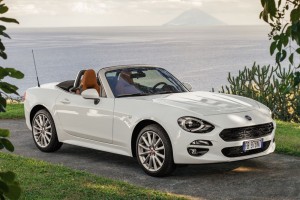 As a cool sportscar for relatively small money the FIAT 124 Spider is a very tempting machine.