Trending
You are at:Home»Reviews»Ford Fiesta review
By Michael Sheridan on 01/08/2017 Reviews 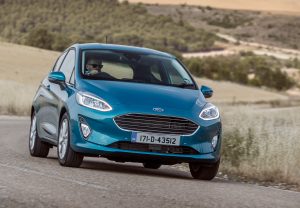 41 years on and the new Ford Fiesta has arrived in Ireland where it hopes to retain its place as the small car leader. The new front wheel drive machine is clearly recognisable as the much-loved Fiesta with only subtle exterior styling changes.

Three and five door versions are offered but buyers will have to look closely to distinguish the new from old. The light clusters have been changed, up front there is a now a hint of Punto while at the rear the lights layout is more horizontal than vertical and this seems to widen the car. Changes to the metal are subtle and panel gaps have tightened. So, the outside is sharp enough without being overly exciting. 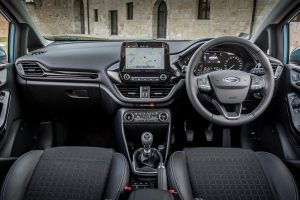 Inside, up front is a nice place to be unless you get the entry model’s plastic steering wheel that feels cheap and nasty. The Titanium grade gets a nice leather wheel. There is seating for five at a push but rear space is limited. Boot space is good for the class and there is the option of a full size spare. The Fiesta gets a host of new technologies and driving aids, many featuring for the first time in a small car. Adaptive cruise control, adjustable speed limiter, blind spot indicator, cross traffic alert, distance indication, driver alert, lane keeping aid, lane keeping alert and forward collision warning all become available. The new advanced driver assistance technologies are supported by two cameras, three radars and 12 ultrasonic sensors. In combination the Fiesta can monitor 360 degrees around itself and scan the road ahead up to 130 metres. Ford claims the new Fiesta is the worlds most advanced mass-produced small car. This claim is true if you select all the options! A lot of the driving aids are cost options. Sadly most buyers of small B segment cars are price driven and simply won’t pay for optional safety kit, no matter how important or potentially life saving it is. Ford charges €700 for a drivers assistance pack that includes Pre-Collision Assistance, Distance Indication / Distance Alert and Adaptive Cruise – that’s not bad value but how many buyers will specify the pack. There are lessons to be learned by all B segment manufacturers from the class above. Honda fits as standard a host of safety driving aids in its new C segment Civic (Honda Sensing).

The refreshed cabin gets a large centre screen on higher grades while entry grades gets a floating radio display with a detachable smart phone mounting clip (not pictured) and USB to allow apps be used for nav etc.

There is a price increase of roughly €700 on the old car but equipment levels are higher. Ford also has to make room in its range for the Ka+ budget supermini. Zetec and Titanium the main trim levels. An excellent ST Line arrives later this year as does the Fiesta Vignale. I have driven the Vignale in Europe and was underwhelmed by it. I doubt it will sell in any numbers in Ireland as it doesn’t deliver a true luxury experience – its just a high grade Fiesta that won’t woo Audi or MINI buyers away from their premium brands. The best version is the 140hp ST Line with the optional €400 B&O Play stereo – that’s awesome. Sync 3 features as do Apple CarPlay and Android Auto phone connectivity.

A crossover Fiesta Active is on the way next year and a fire breathing ST with an expected 220hp will top the new Fiesta range.

The latest generation Fiesta is built on Ford’s small car platform with a few tweaks to the underneath. The suspension has been revised and tuned and it is fair to say delivers the best handling in its class. At the car’s European launch I drove the 140hp ST Line (sports suspension) and was blown away by how much fun the little car was. The new to the range 120hp high power diesel was pretty good too – but no low power cars were made available to us in Northern Spain. 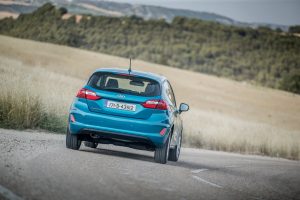 At the car’s recent Irish launch the low powered, real world engines were available. I really wasn’t looking forward to driving the 70hp entry level 1.1 litre (a reworking of the 65hp 1 litre) but the three cylinder petrol engine took me by surprise. The unit didn’t break any land speed records but it did a very good job. Power was delivered in a nice linear way from the non turbo charged engine. I took a 100hp EcoBoost out next and loaded with two additional adult passengers and the turbo three cylinder was brisk and able to handle the weight quite well. New Fiesta impressed me with its ability to grip and communicate through its steering. On damp surfaces the car remained absolutely predictable when cornering and on tight bends also.

Ciarán McMahon, Chairman and Managing Director, Ford Ireland says “We now have a Fiesta option for every driver, with advanced technologies and features that small-car customers could only have dreamed of just a few years ago.”

The expected best seller will be the five door from €17,750.

The new Fiesta is fun to drive yet mature.