Trending
You are at:Home»Reviews»Ford Focus review
By Michael Sheridan on 14/07/2018 Reviews 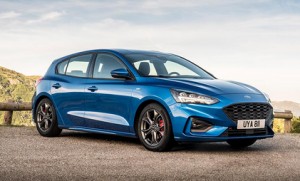 The Focus is 20 years old. Ford says the new model is ‘The best car Ford has ever built’… really?! Let’s find out.

That bold statement from the blue oval brand about the new generation family compact is based on a number of advances. The car has been praised since day one for its dynamic handling and Ford would have to go out of its way to mess with that. Yes there are revisions and improvements to the suspension set up and steering that were already class defining but there is lots more. There’s a host of new technologies, improved connectivity and availability of ADAS driver safety aids. Lighter and better engineered bodies feature with the addition of the ‘Active’ faux SUV/crossover variant. The engine range is refined and there is a new ‘smart learning’ 8-speed automatic gearbox available that can adapt to your driving style. 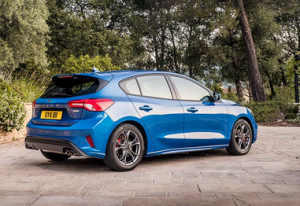 The new Focus rides on the C2 platform; it is wider, lower and has a longer wheelbase than the car it replaces. Combined, these attributes give the car an excellent squat stance on the road. The overhangs are shorter too and with use of lighter materials and structural foam, the car’s weight has been reduced without losing structural integrity. The cabin is set further back thanks to its windscreen ‘A’ pillars being moved rearwards slightly. Overall, the car looks more sophisticated. 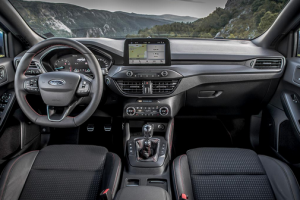 Inside the cabin is roomier with more space up front thanks to the dashboard being pushed forward. A new floating centre screen sits high up on the dash, a dash layout that is less driver centric than in its arch rival the VW Golf. Rear seat passengers get more legroom and headroom is good too. The car’s NVH has been improved and the cabin is a quieter place. If you like good sound there is a B&O system available that is sweet. The button count has dropped also as the dash layout has been simplified yet it remains familiar – very Ford. Ford is keen to point out tighter panel gaps due to greater attention to the build process. Connectivity with ‘FordPass Connect’ delivers WiFi through the embedded SIM card (subscription service) and all of that ‘Internet stuff’ is available. Using Ford’s app on a smart phone owners can remotely start their engine and run it for up to 15 minutes, with the doors safely locked, to pre-condition the car; some other functions are available too. I tried it out and it felt like pure witchcraft… but the feature is becoming more popular in ordinary cars. 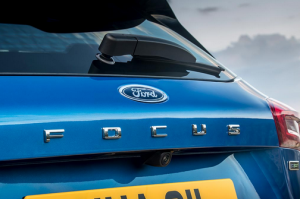 The Focus, over 16m have been sold worldwide, was the first family hatch to give us fully independent rear suspension 20 years ago and in what seems to be a step back the basic Focus gets a solid twist beam rear axle at the rear with only truly fully independent rear suspension coming on the estate (wagon) and higher versions of the five door hatch. All cars get an Eco, Normal and Sport drive mode (steering/throttle/engine) with adaptive suspension ‘CCD’ an option. CCD does the usual to the car’s rides with a selectable Comfort and Sport setting adding to the default Normal. 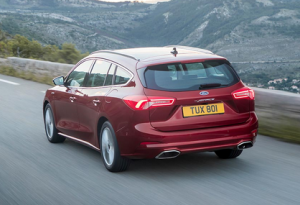 The wagon gets different shocks to the hatch to facilitate the varying loads it may carry . The Active model has an additional 30mm ride height for greater ground clearance to justify its plastic wheel arch cladding. This is done with a wider diameter wheel/tyre combination and different suspension components (shocks and springs). The sporty ST Line sits 10mm lower than the standard hatch and has its own suspension tuning.
Ireland gets a limited engine range with a 1 litre petrol powered EcoBoost 125hp three cylinder and a revised 1.5 litre three cylinder diesel with 120hp. The petrol is lively and free revving it pulls well too and motorway cruising was no problem during our test drives in the south of France. The diesel is a mile muncher and with 300nm of torque pulls better than a three cylinder should. The oil burner can consume the kilometres with ease. A new and impressive 2 litre diesel is available in other markets also. All fuel types get a new particulate filter and overall for claims a 6-10 per cent improvement in fuel economy. COD cylinder on demand features and knows off cylinder one when the load is light.
SAE Level 2 autonomous driving called Ford CoPilot 360 is available; that uses adaptive cruise and lane keeping to help drivers stay on track in traffic. 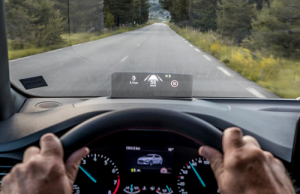 A new and Polaroid glass friendly widescreen pop up HUD head up display is available and works very well. Unlike some rivals the HUD information appears on the road and not half on the bonnet. Adaptive front lighting with predictive curve and sign based light drag the new Focus to the top of the class from being an also ran in the outgoing generation – that car had nothing! Some safety highlights include rear cross traffic alert with active braking and evasive steer assist helps collision avoidance by using all the car’s seniors to predict the safest path.
So there is loads of new tech and the new focus with its Volvo like rear badging looks pretty smart – can it still deliver driving fun? Yes is the quick answer. I tested the hatch with the twist beam and the wagon with its cleverer rear set up and both were interesting and when combined with the car’s accurate, if a little dull in feedback, steering certainly made all routes travelled fun.
The wagon has a clever boot with a sub floor and divider. The clever load cover can be removed or reinserted with just one hand and can also be stowed under floor in the boot. Europe loves estates accounting for circa 50 per cent of Focus sales – Ireland, well we critics love them but they have a poorer following despite being so practical of between 5-15 per cent in the sector. There are three trim types on sale; Focus Vignale is the most luxurious variant with its big grille, Titanium represents the middle ground with the sporty ST Line the most aggressive looking and one I’d go for. 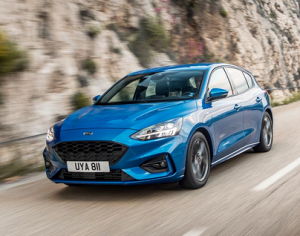 The new Ford Focus is in a shrinking sector that is now outsold by the more fashionable genre of crossover SUVs. The family hatch and estate is putting up a strong fight and has no intention of going quietly. The new focus is a great car.