Trending
You are at:Home»Reviews»Ford Ka+ International Launch Review
By Michael Sheridan on 25/11/2016 Reviews

The cute little Ford KA came on the scene back in 1996 and stayed in production in Spain for European markets until 2008. The three-door hatchback was originally a chopped mark 4 Fiesta that was adored by its owners. KA was compact and nimble but was restricted in its appeal as it only had seating for four. It was cheap to run and had low repair costs thanks to lots of exterior plastics to protect the body. A two door convertible StreetKA penned by Pininfarina completed the range and both machines had lively 1.3 litre petrol engines.

The second generation KA came along in 2009 and was a partnership with FIAT. In fact this version was not really a Ford. Sure, there were a couple of Ford badges but it was built by FIAT in its Tychy plant in Poland using the guts of a FIAT 500 and its mini platform. Under the three door’s bonnet KA had Ford engines. This time you could choose petrol or diesel power with a new Duratorq 1.3 litre diesel option available. We went to London to try out the very latest KA, the KA+ that has just gone on sale in Ireland. Now with five doors the really nice surprise with KA+ is that it is an actual ‘Ford Ford’! 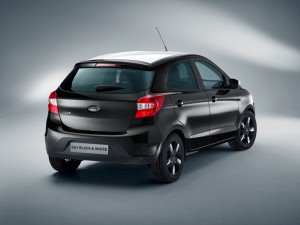 KA+ destined for Europe are built in India and the machine is also built in Brazil for other markets. With KA+ Ford now has two small segment cars as KA+ joins Fiesta in the very competitive sector. Fiesta even though it is due to be replaced mid 2017 is positioned a few grand dearer at the more premium end of the supermini sector. KA+ is targeted at the value for money ‘budget’ end of the market.

Sitting on Ford’s global B car platform KA+ is a much bigger machine than the KA it replaces. The exterior styling is fairly good and inoffensive. Even though it won’t find its way on to many bedroom walls, it will gain a fan base. The KA+ target audience is more interested in affordable transport than cutting edge styling. Head on the big Ford grille looks smart – as do the lights. The rear is smart too with clean lines. The 270-litre boot is small but useful. A 60/40 folding rear seat aids practicality too. A space saver spare wheel will feature on Irish cars. There is no external boot key slot, you open the boot via a dash mounted button or using a button on the key. 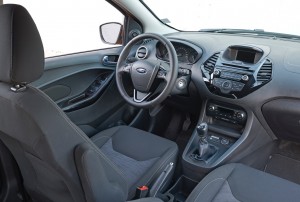 When viewed side-on KA+ lets you know that the front wheel drive car is all about interior space. KA+ may be under 4 metres long but it is tall. KA+ is 29mm taller than a Fiesta. Despite some nice body crease and great wide-opening doors the car manages to look under wheeled. The wheel arches house relatively tiny 15-inch wheels – that said the ride quality is impressive.

KA+’s exterior lets you know its design is all about maximising interior space. Inside the cabin there is a good amount of space. There are seat belts for five, making it a genuine Hyundai i10 rival. Four adults will fit easily with plenty of leg and headroom – even in the back for six footers. Build quality and the interior layout doesn’t scream budget and is on the face of it very we’ll put together. 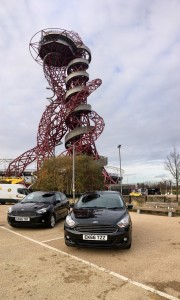 Just two grades will be sold, Studio and Zetec. Power comes from a 1.2 litre Duratec petrol engine that is available with two outputs. Studio with its steel wheels and hubcaps gets a 70hp/105nm engine while the higher grade Zetec gets a 85hp/112nm engine. All our test cars were Zetec and had manual 5 speed gearboxes. KA+ is not about out and out performance but the 85hp engine is nippy and quite economical too. KA+, despite being originally conceived with South American markets in mind has been made to handle well. Hats off to Ford on the handling as this was promised to by Ford when I got a sneak preview of the car in its Cologne HQ earlier in the summer. 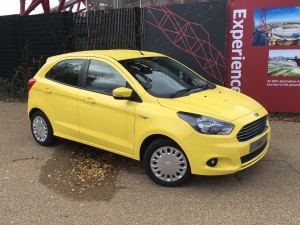 What kit do you get?

KA+ may be pitched at the budget buyer but it still gets a lot of equipment as standard like daytime running lights, front fog lights, hill start assist, Bluetooth connectivity and a speed limiter on the entry level ‘Studio’.

KA+ is offering a heck of a lot for less money than a Fiesta. There are questions to be answered like will Fiesta sales suffer, or is there room in the market for both machines? Fiesta has a more complex and stylish exterior and its interior is still a little bit funkier. KA+ will appeal to more mature buyers and those starting out who want lots of interior space and value for money price.

Prices start from €13,050 for the Studio model and €1,600 more gets you a Zetec at €14,650. Ford KA+ comes with a seven-year warranty. There are some additional equipment packs and options available like heated seats, privacy glass, auto air con and rear parking sensors (part of the City pack).

According to Ford Ireland’s boss new KA+ should be seen ‘not a replacement for the old KA… it’s a different animal’. Ciarán McMahon went on to tell me that during the last five years KA has shifted about 70 units per year, which he admits is a very poor amount. Despite the rise and rise of SUVs the small car sector has held its own at about 20% of the Irish new car market. New KA+ will sell over 300 units in 2017 and more than treble that amount in subsequent years. All Ford’s in Ireland now come with a 7 Year, 100,000km warranty.