Trending
You are at:Home»Reviews»Ford Ranger Raptor revisited review
By Michael Sheridan on 16/08/2020 Reviews 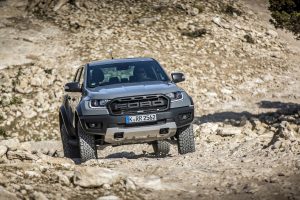 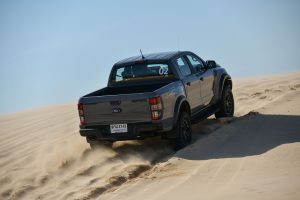 We first reviewed the brilliant enhanced Ford Ranger in November 2019 http://motorhub.ie/ford-ranger-raptor-review/ we jumped at the chance to test one again. Raptor is a sub brand and used by Ford Performance on versions of its tweaked Ford ’trucks’ – there is also an F150 Raptor. The Raptor looks almost like a cartoon of an off-roader and it sis a great off roader. The key to Raptor’s ability is its trick suspension that delivers 30% more travel than a standard Ranger, so basically its a Ford Ranger dialled up to 11. 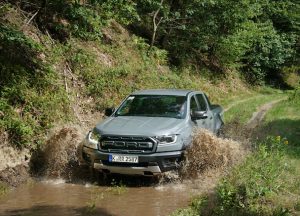 The European focused Ranger Raptor is powered by a 2 litre bi-turbo ‘EcoBlue’ diesel that uses a 10-speed automatic to deliver power to the rear or all four wheels depending on the driver’s selection (2WD/4H/4L). Raptor’s 213hp delivers a modest top speed of 170km/h (106mph) – but the reality is the car can do a high percentage of this speed off road too thanks to its suspension and the engine’s 500nm of torque! In the real world this means rough roads, speed humps and off road trails are dispatched with ease in the big beast. Raptor’s proportions are based on the ranger but it sits wider on the road and is taller too. Presence, the Raptor has presence. Big, chunky all terrain tyres and dark ‘Dyno grey’ 17 inch alloys make the most angry kerb stones weep in fear while the raptor’s bulging wheel arches are so pumped WADA (the anti-doping agency) should test them! 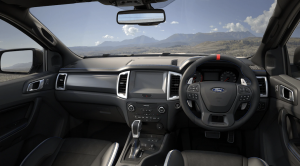 Inside once you climb up to the cabin using the perforated side step you get leather/suede Recaro sports seats and a Ford Performance steering wheel – with a red band at the 12 o’clock position. Electric front seat adjustment (8 way) is standard. Navigation, smart phone connectivity and dual zone air conditioning make the cabin a nice pace to be in. To say the view of the road from the driver’s seat is commanding is an understatement – it great. 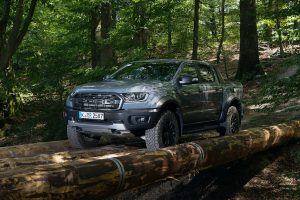 Any vehicle with a terrain management system and a ‘Baja’ driving mode is clearly serious about traction and the Raptor can handle tarmac or jungle with ease. Ground clearance is 281mm and the Raptor can wade through 850mm of water. There are different selectable drive modes: Normal, Sport, Grass, Gravel, Snow, Mud & Sand and Rock mode – so you name it the Raptor can traverse it. 0-100km/h takes 10 seconds and while this isn’t that quick compared to a hot hatch the fact is the Raptor can accelerate with gusto on any terrain or surface. Its a big machine and the vented brakes do a reasonably good job of scrubbing off speed and at times during our test we would have liked stronger stopping power. Towing capacity is 2.5t and the Raptor’s maximum payload is 620kgs. 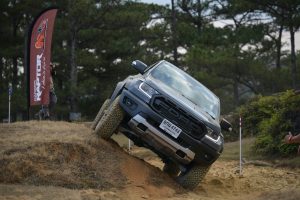 Initially there was some confusion as to the Raptor would qualify for commercial vehicles status in Ireland but today it is sold as a private car or as a commercial vehicle. Pricing is a from a whopping €64,169. Our test car with €900 paint weighed in at €65,069. Annual private motor tax based on its 233g/CO2 emissions is basically obscene next to the €333 commercial vehicle charge. The Ford Ranger starts from €32,295 – that’s half Raptor’s price. 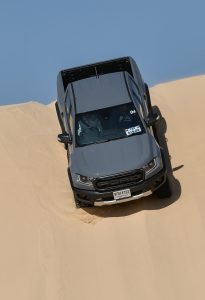 The Raptor is exceptional and for most people utterly unnecessary but it is ‘oh so brilliant’ too!