Trending
You are at:Home»Reviews»Ford Ranger Raptor review
By Michael Sheridan on 05/11/2019 Reviews 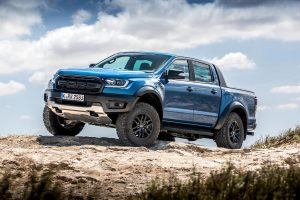 Over the top is an accurate statement when talking about the Ford Performance Division’s Ranger Raptor. The double cab, five seat pick up truck is Europe’s idea of America on wheels. There is lots of power coupled with incredible suspension travel that marks the Raptor out as an excellent choice of transportation should the world come to an end. 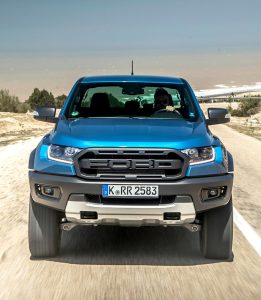 Under the bonnet purists will demand the V6 3.5 petrol engine option but there is a more practical and far less thirsty diesel option. The BiTurbo 2 litre EcoBlue pushes out 213hp and a whopping 500nm of torque. The diesel is Euro 6 compliant and quite frugal despite its looks. The power goes to the rear wheels ‘Yee-Haa’ – sorry I don’t know what came over me there. As I was saying power goes to the rear wheels but a small rotary dial near the gear selector allows the driver select more traction with four wheel drive high ratio or four-low, plus you can lock the differential for really tricky off road conditions. Ford’s terrain management system can also help drivers on tricky surfaces maximise traction with little effort. 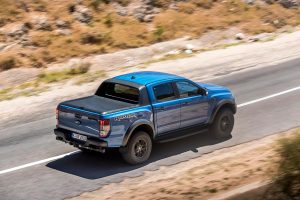 The Raptor’s power is delivered through a 10 speed automatic gearbox that is also used the F-150 Raptor and Ford GT supercar. Top speed is 170km/h (that’s plenty considering its weight, high centre of gravity and off road tyres). 0-100km/h takes 10 seconds but feels a lot quicker from the elevated driving position. The Raptor can stop well too thanks to vented disc brakes all round. Raptor sits on relatively tiny 17 inch alloys married to high profile off road tyres. Ford has fitted all-terrain BF Goodrich 285/70 tyres specially developed for the Raptor. The 838mm X 285mm tyres have a tough sidewall to take on all environments with confidence, and an aggressive off-road tread pattern that provides great grip in wet, mud, sand and snow conditions. The Raptor’s wheel/tyre combo looks so Yee-Haaa sorry I’m at it again, I mean good. 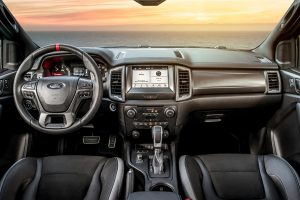 Inside the cabin you’ll find a gun rack, a hound dog – sorry, neither of these quite frankly ‘essentials’ are standard. Inside there is unique raptor trim featuring leather and suede seats. The driver’s seat is electrically adjustable (don’t tell anyone or they’ll think you’re soft) and dual zone climate control. The bad news is that Raptor despite having Ranger origins is not classed as a commercial by revenue in Ireland. This means that you have to pay full car price and pay full car motor tax every year. The Diesel raptor starts at €63,950. 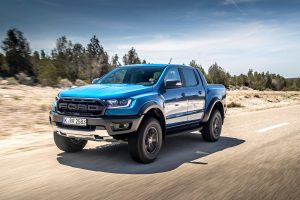 On the road the raptor is a beast and needs to be guided at times with concentration when navigating tight urban roads and carparks. Speed humps and traffic calming usually can be hard on pick ups with their leaf spring rear suspension but the Raptor laughs at road imperfections as it was made to tackle rough terrain at speed. The Raptor’s cushioning ability is due to its specially designed suspension and its Ford Performance chassis, both engineered to be much more forgiving on rough terrain. Out in the open the Raptor is a hoot to drive and even makes a burble. 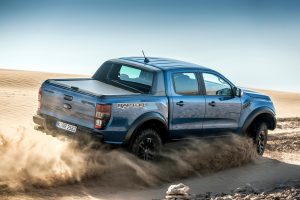 “Forget everything you think you know about pick-ups,” said Leo Roeks, Ford Performance Director, Europe. “Our new Ranger Raptor is a different breed – a thoroughbred desert racer and extreme lifestyle off-roader that can toil with the best of them in the harshest of working conditions.”

All the components are designed with a purpose in mind. The shock absorbers are made by Fox and feature position sensitive damping especially in extremes. Up front the shocks have 32% more travel and the rear’s 18%. The high performance 63.5 mm diameter dampers are supported by aluminium control arms, with protruding shock absorber towers at the front. Bespoke coilover rear suspension features an integrated Watt’s linkage that allows the axle to move up and down with very little lateral movement. Raptor’s track is wider than Rangers by 150mm plus its rides higher by some 51mm. 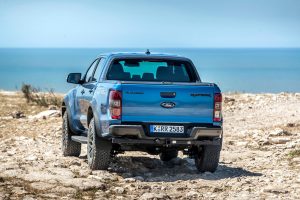 “The standout experience of the Ranger Raptor, hands down, is how far you can push it off-road and still ride like a millionaire on-road,” said Damien Ross, chief program engineer, Ranger Raptor, Ford Motor Company. “Everything about the Ranger Raptor builds on the already outstanding sophisticated feel and functional capability of the Ranger, and then goes further. From a driving dynamic fun standpoint, it is really an exceptionally special vehicle.” 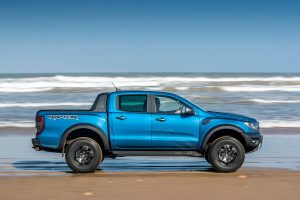 A multiple of drive modes are available via the steering wheel mounted buttons: Normal, Sport, Grass/Gravel/Snow, Mud/Sand, Rock and our favourite Baja mode. This is tuned for high-speed off-road performance, just like drivers need in the famous Baja desert rally and on the school run – that last bit mightn’t be true.

Ford says the Ranger Raptor remains a true workhorse and yes I did fill the rear deck with firewood while testing it. A modified rear bumper features an integrated tow bar with 2,500 kg capacity. Two front recovery hooks are able to shift up to 4,635 kg, and two at the rear are rated 3,863 kg. A 1,560 mm by 1,743 mm load tray has been designed with the weekend explorer in mind. It can take dirt bikes, jet-skis or a herd of Pugs (for city folk). 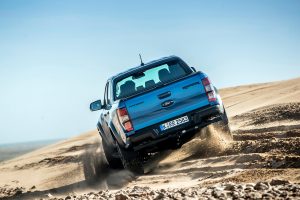 “The new Ranger Raptor delivers all the tools a thrill-seeker could ask for,” Roeks said. “Like a motocross bike, snowmobile and an ATV in one – it’s the ultimate adventure pick-up.” We agree!