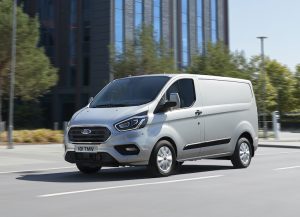 A Transit van with a 1-litre petrol engine… Ford must be joking? We’ve been testing the new Ford Transit Custom PHEV and yes the plug in hybrid Transit does have a tiny engine that you’d find in a Ford Fiesta. The really interesting thing is that the three-cylinder engine does not turn the Transit’s wheels… intrigued? Even we are! … so read on. 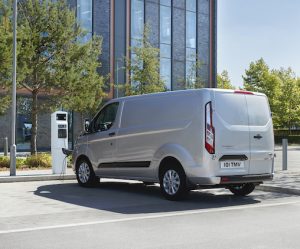 The 125hp EcoBoost engine and a 13.6kWh rechargeable battery pack provide power to an electric motor that turns the wheels. Basically the Transit Custom PHEV is an electric vehicle with a relatively small battery and big petrol generator onboard. The Transit PHEV has an electric only range of just over 50km and this makes it ideal for urban use. Ireland loves a diesel van and particularly adores the classic one ton Transit that has been with us since 1965. This diesel love is the result of a number of things. They are cheap to buy, tax efficient and allow businesses claim VAT rebates on their diesel fuel. So a petrol van is a bit like a chocolate teapot; a nice idea but useless in the real world. Oh and to throw another spanner in the works – the PHEV’s price. At €49,125 the plug in hybrid costs roughly twice the price of a regular diesel Transit Custom. Ford also offers in the Transit range a mild hybrid (MHEV) Custom powered by a 2 litre engine with manual or auto gearbox options. 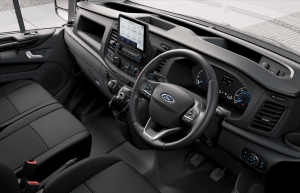 Outside apart from a badge or two, body coloured mouldings and bumpers, 16 inch alloy wheels and an odd looking flap in the front bumper the PHEV looks like any other Transit. Inside there is nothing out of the ordinary except an auto gear selector, two fuel gauges – one for the battery and one for petrol plus a EV power/status dial next to the speedo. A few small additional buttons near the steering wheel are the only real differences in the cabin. The driving position is as you’d expect great, even the manual handbrake is carried over. Our test van had the optional ‘Visibility’ pack: rear view camera, lane keeping alert, power-fold mirrors (€780) and this is a worthy addition. 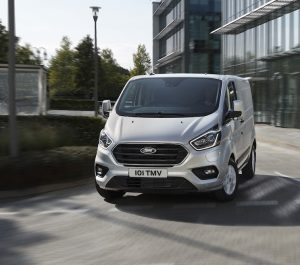 On the road the front wheel drive PHEV automatic uses a single speed transmission. It delivers a ridiculously smooth drive. There are four selectable drive modes with ‘Auto’ the default. This means the van decides when it needs the petrol engine to kick as a generator. When you have enough power in the battery the transit will move off in electric mode in an incredibly refined way. In stop start traffic the hybrid powertrain makes the cabin a restful and tranquil space. The standard diesel transit is quite a nice place to be but the PHEV takes it to another level. There is no lurch when you move off apart from if you press the accelerator too hard with an empty van. If you’re low on battery power the petrol engine will kick in as a generator and it let you know by its high revving soundtrack that it is working harder than intended – but on the upside it doesn’t create any nasty vibrations in the cabin or through the pedals. Ford’s MyKey allows speed limits to be set to keep wayward drivers in check. The PHEV is quick initially off the line but it is definitely not a GT. On the motorway it likes to cruise – couriers your licences will be safe! 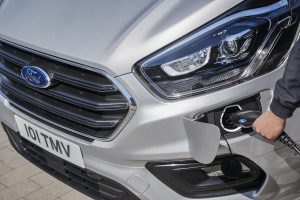 To get the best out of any PHEVs and deliver the lowest emissions at the tailpipe you need to regularly charge up the battery pack. The engine-off electric only range of the custom PHEV from a fully charged battery is quoted at a little over 50km. On the road you can press a button to select EV mode (only if it has enough battery capacity) and you can also press a button to charge up the battery using the petrol engine for later use. Regenerative braking will also recover some energy to the battery. Charging takes 4.3 hours at a slow domestic EV charge point (3.3KW) or 2.7 hours at a newer 7 Kw home charge point. This done by connecting a cable to the van’s socket housed on the nearside front bumper. Again let me stress that if you don’t plug in and charge up the battery pack as often as possible the PHEV may as well be a very thirsty one litre petrol van! In ‘auto’ mode fuel consumption should average circa 7L/100km or 40mpg – that’s impressive next to the diesel. 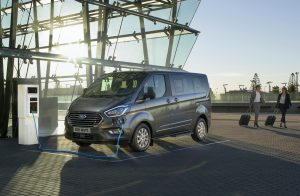 The Custom PHEV comes in one wheelbase and body height (L1/H1), this is the Custom’s smallest body. Not surprisingly the PHEV works very well as a van, with no compromise and rear cargo space and a payload capacity of 1,130kgs. The payload is slightly lower than the diesel’s due to a revised and heavier front axle that houses all the extra electrical bits and pieces. The Ford Transit Custom range starts from €26,630 (2 litre diesel). The passenger version of our test van the ‘Tourneo’ Custom PHEV in Titanium spec. costs €63,313. 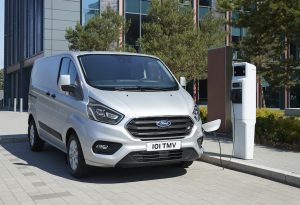 The Ford Transit Custom PHEV is a pleasure to drive and ideal for urban deliveries and the Tourneo passenger version makes an ideal low mileage shuttle. This van is designed and ready for use in low emission zones like London’s where it is exempt from the congestion charge. If your not ready for a full EV van the PHEV is the way to go. Our 340S Limited test van (€51,985) including extras cost €52,765.