Trending
You are at:Home»Features»Goose on a Bike!
By Michael Sheridan on 22/02/2019 Features 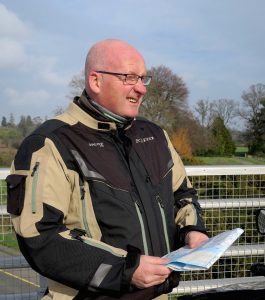 Grand Slam winning rugby coach with Ireland, Philip ‘Goose’ Doyle is credited with putting women’s rugby on the map in Ireland. Much in demand internationally he is now the head coach of Scotland’s international side but his coaching legacy in Ireland cannot be underestimated. When he took the Ireland coaching job he transformed a side that had never scored an international try in to a team that crossed the try line 14 times in his first season. Under Goose’s care the national side enjoyed victories over all the home nations and even a Triple Crown & Grand Slam in 2013 with victory over Wales, England, Scotland, France and Italy. In 2014 the unbeatable All Blacks were proven mortal by the Foxrock man’s team in a truly historic victory. 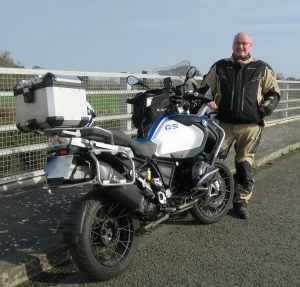 To this day his women’s team are the only Ireland rugby team to reach a semi final of a World Cup. With each of his four world cups he improved Ireland’s World ranking and he is particularly proud of that fact. He stepped away from the top job in 2014* with a legacy that hasn’t been touched since. Nowadays he’s back coaching at the ground routes with Blackrock women who are doing great things in the A.I.L. Goose took some time out of a hectic schedule to talk about another love in his life – Motorcycling. 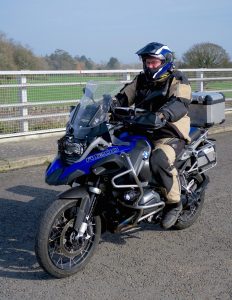 Goose at over 6’3” and 120+kgs rides a big trallie yet somehow he manages to make his giant BMW GS1200 look compact. Goose rides year round but has a car for extreme weather days too. A typical days riding covers 180 kilometres from his county Wexford home – so having the right gear is essential. Goose believes there is no such thing as bad weather just the wrong clothing. To this end he rocked up wearing his new Klim Gore Tex pro suit**. “I’ve had three of four sets of gear before this suit and it was a pain having to carry wet weather gear also. A top quality suit was always on my wish list and this Klim does the job brilliantly. Biking can be a pain if you’ve bad clothing with the likes of drops of water getting in on you or poor wind protection. I’d advise any rider to spend as much as they can afford to get the best gear out there. Today with my Klim suit I’ve just a couple of thin layers underneath as the trouser and jacket combination is really well insulated but the bonus is it is really light also. It does everything I want it to do and more… sure I’m still finding new air vents! It’s great in winter when I’m on the road but it is also designed to work perfectly in desert heat and I’ll be testing it there soon.” 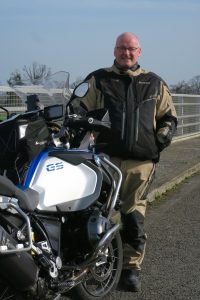 Goose uses his motorcycle to travel all over Ireland but he also heads off to Scotland and far further afield when he can, and usually with a bunch of mates. “The GS is great for adventure riding and with bluetooth fitted to a top quality helmet its not a bad two wheeled office either”. His favourite destination is in North Africa: “Morocco is a wild place and it has some very hard desert.” Goose says the journey is what matters rather than the destination and travelling with mates is the best way of doing it. Going through the UK is his preferred route where he meets friends along the way before taking the tunnel to France. “The train and ferries are much better at securing motorcycles these days and you don’t need to bring any lashings to tie the bike down. You can skip to the top of the queue on ferries and are first off but are made to wait on the euro-tunnel and go last”. 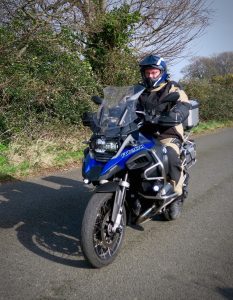 His eyes light up when he tells me of his goal of riding far in to the East and across Russia and beyond as that would be a serious adventure. “The further East you go the shakedowns by law enforcement can be more of an issue but its manageable, €300 of a made-up fine for allegedly crossing a white line can be haggled down to €30! – I’ve had that”.

So where did the biking bug come from? ”I’ve loved bikes since I was a kid… I came back to bikes in my early thirties but the bug was always there. The Celtic Tiger and increasing traffic was the excuse I needed to get a bike and it got passed my wife (laughing). I made a point of getting trained up and road fit. I still go on riding courses when I can as you never stop learning.” 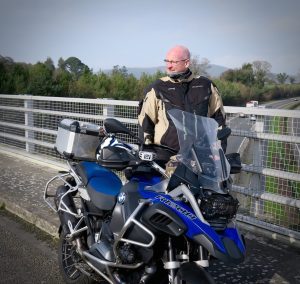 Goose says the essentials for long distance bike travel include “Obviously the right machine, a good tank bag for maps and phone, a good handlebar mounted GPS navigation unit, big panniers and of course the right PPE protective clothing with Klim being my preferance”. As for all the new mod cons like heated seats etc. Goose says “ah, for heavens sake – unless you’re in Canada in an arctic winter – harden up!”