Trending
You are at:Home»Reviews»Honda Civic Type R review
By Michael Sheridan on 30/03/2018 Reviews 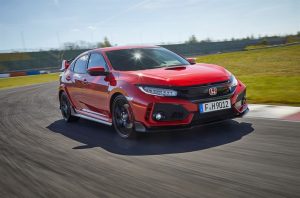 In a given year only a very few new cars I test drive have an X factor that compels onlookers to strain their necks in admiration or disbelief. The BMW i8 and Ford Mustang caused a stir. Humble machines like the Focus RS and Lexus LC drew admiring glances too while nearly every generation of the Honda Civic Type R has got nods of approval. 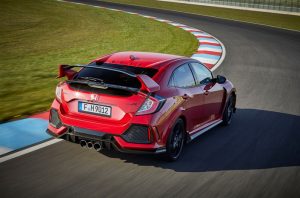 The latest 20v turbocharged Type R pocket rocket from the Japanese manufacturer is a striking machine and I have had to shake off one or two very keen followers trying to track my route home. The stock Civic has a look that is, how can I put this, less normal than most family hatchbacks. I love it but then again I have gone through the design with a fine tooth comb and have chatted with its engineers and can even tell you why they moved the position of the fuel tank! So we know the five seat Civic is a very well engineered machine with loads of space but what happens when you want to dial up the power a little on the excellent 1 litre or 1.5 litre offerings? Enter the latest Civic Type R. The ultimate Civic produces 320hp and 400nm of torque from its 2 litre VTEC engine and is the polar opposite of subtle. It is not a wolf in wolf’s clothing – it has eaten the wolf! The rear wing is not a modifier’s add on but a serious bit of down-force. The purposeful lowered body and ridiculously sticky low profile tyres on very cool 20 inch rims are designed for one thing and one thing only. Changing direction in a heartbeat and travelling very quickly are core elements in the Type R’s DNA. To its credit the R has broken more records for its class than you could shake a stick at and is of course the fastest ever front wheel drive car to circuit the Nordschleife. 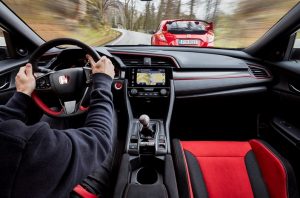 The performance figures only tell part of the story. The 1,380kg Civic Type R can sprint from 0-100km in 5.8, which is hardly F1 pace but the front wheel drive Honda stamps its power down and drags you towards the horizon with gusto. Top speed is 272km/h (169mph) and while this is pretty quick, the car isn’t about outright straight line speed but cornering performance. The Type R sticks to the road surface like glue and countless other cornering cliches thanks to its great aerodynamic performance and down-force. Inbuilt is engineering excellence and this is the bedrock that Honda is built on. Honda is an engineering company first and foremost and this gives owners a great sense of price and confidence. If you know someone who likes to joke about Hondas being dull they are ‘so missing the point’. The Civic Type R manages to be raw and exciting yet it works brilliantly as a family car too! Three driving modes are available at the flick of a switch. Comfort (blah), Sport (yum) and +R (nuts) do as you’d expect to the engine mapping, suspension and steering. 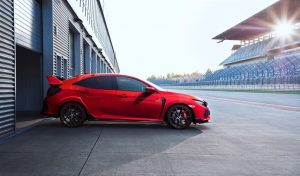 Honda Civic Tpe R cost from €51,750. Like the stock Civic the excellent ‘Honda Sensing’ suite of safety features is standard. Auto braking and a host of other driving aids (lane keeping, adaptive auto cruise etc.) will help keep you from straying from the right path when you decide to simply commute and not. The Type R wants to be driven and when you grab it by the scruff of the neck it will really reward the enthusiast. The six speed gear change has a short throw and feels beautifully mechanical. Steering is precise and responsive. The last Type R was a bit nuts and like the first Ford Focus RS you had to switched on behind the wheel when pressing on. Any road imperfection or camber change could be followed by the car if you weren’t actively steering to stay on track. 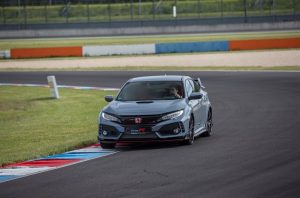 My test car came with the optional GT Pack at €2,200 that adds sat nav, parking sensors, dual climate control, tasty red line styling, bigger audio system, auto lights/rear dimming mirror, front fog lights, folding mirrors,cabin ambient lighting and wireless phone charging. Is €53,950 for a Type R GT value for money? Hell yeah. The downside to ownership is the tiny fuel tank that runs dry far too quickly. Fuel consumption and emissions are not the worst when you take in to consideration the outrageous performance. 7.7l/100km (30mpg) is possible (cough) and emissions are 176g/CO2 so it falls in to tax band E (€750 annual motor tax).

The Honda Civic Type R is a brilliant machine that is full of character. While the front wheel drive Type R may lack the assurance of the all wheel drive systems in some rival hot hatches it is still incredibly competent and wonderfully shouty too… I love it.

PS Type R’s three exhaust pipes are really two either side of a resonator in the middle that generates extra sound at lower speed.