Trending
You are at:Home»Reviews»Honda’s Civic Duty review
By Michael Sheridan on 10/03/2017 Reviews 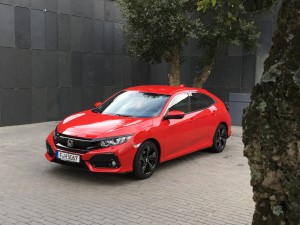 Honda does its civic duty by putting its customers safety first.

When Civic launches in Ireland in mid March it will feature as standard a class leading suite of potentially life saving driving safety aids. As a result Honda is confident it will gain a Euro NCAP 5 Star rating for its entire Civic range.
Honda’s 10th generation Civic is a significant machine in many ways. Civic sits on a new platform and has bold styling so it looks quite different to rivals like Golf or Focus. It is a good deal lower, wider and longer than the outgoing car and even more dramatic. Civic gets two new very clever petrol engines also, but we will have to wait until later in the year for a diesel Civic. While there is a swing back towards petrol power diesel is still the dominant fuel in the class so sales will suffer until the oil burner arrives.
Ireland gets just one body shape the five door hatchback despite a coupe and saloon being available in LHD markets. Honda’s Swindon plant in the UK is tasked with producing the hatchback. Unlike previous Civics that looked different depending on where in the world you were, Honda Europe was given the lead design role with the new car. This version with only slight variations will be sold in over 170 countries.

The front wheel drive machine has good road presence and a sizeable footprint. On the outside there is liberal use of dramatic styling lines and black plastic paneling at the rear that hints of the sporty Civic Type R. 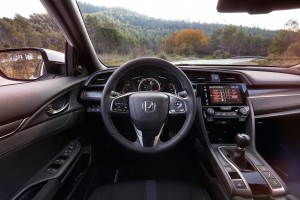 Inside the quieter cabin is a lot of space. Occupants sit lower in the car thanks to a lower seat hip point. Up front the driving position is excellent. The split dash layout of the 9th generation is gone and in its place is a fresh more conventional setup. Smartphone connectivity is good with Carplay and Android Auto featuring. An electronic handbrake with auto hold is now standard across the range. Civic’s standard six speed manual gearbox has a perfectly positioned gear lever with a nice short throw. Access to the back seats is good but sadly gone is the Magic Seat rear bench that allowed floor to roof loading with the seat base folded up. The repositioning of the fuel tank from an area under the front seats to under the rear seats can be blamed for this. The move enabled designers to lower the car’s height yet improve passenger space.

Boot space is increased to 478 litres. A space saver spare can be ordered from the dealer for circa €200 otherwise Civic gets an inflation kit as standard. New Civic is lighter and a new inside out construction has been developed with the inner shell being built first and then panels added to it to make the body. Engineering is at the heart of Honda and the level of technical detail in the new car is truly commendable. Honda boasts it used a third of its total research and development capacity on the new Civic. The mantra of ‘man-maximum, machine-minimum’ was at the core of the design thought process. Safety First.
‘Honda Sensing’ is the catch all name that includes CMBS (autonomous emergency braking), forward collision warning, lane keeping assist, lane departure warning, road departure mitigation (that uses a windscreen camera to detect deviation and electronics can then intervene if necessary to pull you back in to your lane), intelligent speed limiter, adaptive cruise control, traffic sign recognition, low speed following, blind spot alert and rear cross traffic alert. These potentially life saving systems are usually a cost option with other manufacturers. More frequently they appear on a single variant in a car range in order to gain the top safety rating, but it has to be stressed that only this version that can claim the 5 stars and buyers need to take note of this. Honda has to be applauded for making this level of safety standard knowing it impacts on the car’s retail price. 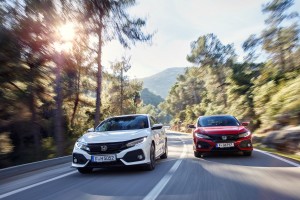 Powerful engines.
Honda’s new Earth Dreams petrol engines are impressive. F1 technology has been harnessed and remarkable mechanical bits and pieces help aid efficiencies. Sodium filled exhausts valves, a variable capacity oil pump and electric thermostat are some new Civic buzzwords that are guaranteed to get you a second date with any mechanic.
The entry engine, available in four trim levels, is a 1 litre, three cylinder turbocharged VTEC that delivers 129hp/200nm. As with the latest batch of compact 1 litre engines across the industry you simply have to ignore its cubic capacity and look only at the power and torque figures it delivers. If you want more power there is a 1.5 litre four cylinder with 182hp/240nm. It comes in S Design trim as standard. Honda Ireland believes that both versions should do business beyond their class – especially the 182hp.

Price and Grades.
The range starts with the ‘i-Tech 120’ range that features the 1 litre in ‘Smart’ trim from €23,750. Hondas in Ireland are never cheap relative to their rivals but when you look closer they often are worth the premium. All 1 litre versions come in under 110g/CO2. The next grade up is called ‘Smart Plus Pack’ from €26,250. Premium that gets more toys starts from €30,150 and Premium Plus Pack from €31,650 gets wireless charging, LED headlights, LED front fog lights, headlight washers and gear paddle shifters and it tops the 129hp range.
The 182hp i-Tech 1.5 litre turbo S Design starts from €28,550 with an optional GT Pack at €30,750 or Prestige Pack at €32,550. The new grade names are silly and I don’t think customers will thank Universal Honda for them but Honda says the new car is such a seismic change it needed a unique trim designation. Suspension and steering changes.
Civic’s suspension gets a big revision at the rear. The old torsion beam rear axle is replaced by a new independent multi link set up. Active dampers feature on the Premium, GT and Prestige Pack Civics. In normal mode the ride is a little softer than the standard car’s suspension, while in dynamic mode the car is not surprisingly slightly firmer but not overly sporty. Civic gets a new variable geared steering setup that is fluid and predictable although not quite MX-5 quick.

Automatic is a €1,600 option. Both cars get a unique CVT box with slightly reduced torque. In the 1 litre the gearbox works surprisingly well. Unlike many CVTs that feel like the clutch is slipping when accelerating, in Civic it feels like the engine’s drive is properly connected to the wheels. It makes artificial gear shifts and lower revs too. You can pull the lever back from D to S mode and manual paddle shifters also allow more spirited driving and control. I preferred the auto in the 1.5. It shifted gears at low revs and felt almost conventional. The additional torque makes for relaxed driving. The auto sits in the same tax band as the manual in both versions. 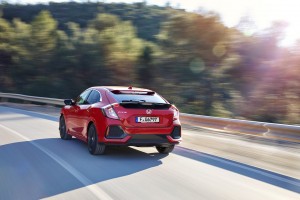 Verdict
The smaller engine impressed more as did its price. It felt eager and willing at low speed yet on the motorway cruised with ease. On a variety of roads Civic’s ride remained comfortable with some noticeable roll on initial turn-in when cornering. The 1.5 had the expected refinement that an extra cylinder brings and was an impressive free-revving unit. When revved up to the limiter the engine felt light, tight and beautifully fluid. Honda simply builds great engines and this 1.5 is very good. If you have had a diet of diesel cars you will have to get your head around piling on the revs to get the best performance. Despite having 182hp the 1.5 doesn’t feel sporty enough to make you enjoy pressing on and it works better as a cruiser. The 1.5 is relatively expensive next to the 1 litre and despite Honda Ireland’s wishes for it to be an Audi beater, and I’d have one before an A3, most buyers still see a humble Civic!
Universal Honda says Civic accounts for about half of its new car business in Ireland. Civic’s success will be limited by Honda’ relatively small dealer network, this is a pity as the five seat hatch is a very impressive package.