Trending
You are at:Home»Reviews»Honda CR-V Hybrid review
By Michael Sheridan on 30/12/2018 Reviews 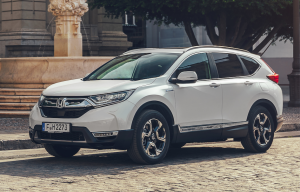 The Honda CR-V is the world’s best selling SUV with 9.2m global sales. The latest (5th) generation ditches diesel despite Honda’s own diesels being impressive and instead comes in petrol or hybrid (petrol/electric) form only. Sitting on the Civic’s modular platform the new car is big on comfort and practicality while the noise from under the bonnet is hardly audible thanks to the fuel choice and new noise cancelling technology. We’ve put the 1.5 litre petrol and latest 2 litre hybrid version to the test.

In Ireland the CR-V has modest sales but the loss of strong diesel engine in this sector is at best a brave move but also reflects the mood swing to petrol in the light of diesel shaming. 2018 saw a rapid rise in petrol power pointing to a changing tide. 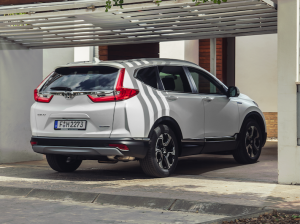 The standard CR-V’s 1.5 litre petrol engine is taken from the Civic. It comes in two power outputs of 173hp and 193hp – in Auto AWD guise. The turbocharged 1.5 does a good job of hauling the five or seven seat versions around but is still a little shy on pulling power. This is where the new CR-V hybrid steps in. Honda has sold over 2.4m hybrids to date and its hybrid IMA (integrated motor assist system) history goes back to 1999 with the Insight. In the following years the Civic, CR-Z and Jazz hybrids came along. The CR-V hybrid is the Japanese brand’s first European hybrid SUV. Two and four wheel drive versions will be available when the car goes on sale in Ireland in February 2019. The 1.5 litre CR-V produces a maximum of 243nm while the new 2 litre CR-V Hybrid pushes out 315nm that nicely fills the power gap. Fuel consumption is dramatically better with the hybrid falling from 7.1 litres per 100 kilometres to 5.3 l/100km or 39.8mpg to 53.3mpg. The CR-V Hybrid driving experience features Honda’s new iMMD at its heart. The intelligent multi-mode drive technology works away in near silence and automatically selects from electric only, hybrid or engine only driving profiles. 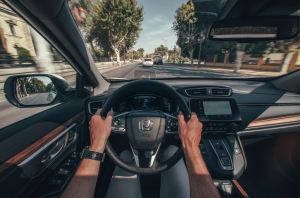 The CR-V Hybrid moves using a combination of a petrol powered internal combustion engine, an electric motor, an electric generator motor and a rechargeable lithium-ion battery pack to power the wheels. It also uses regenerative braking to top up the battery pack. The new i-VTEC 2 litre petrol engine has been tuned to be highly efficient. Most hybrids cars use what’s known as a planetary CVT automatic gearbox that are often criticized (despite the engineering efficiency) for being whiney. Unlike other hybrids the CR-V Hybrid has just one fixed gear. The Honda CR-V’s hybrid system is innovative. In EV Drive mode the rechargeable battery pack provides power to the electric propulsion motor that turns the wheels. In Hybrid Drive the wheels are turned by the electric propulsion motor. In this case it gets power from two sources, the battery pack and an electrical generator – that in turn is powered by the petrol engine. The only time the petrol engine drives the CR-V Hybrid’s wheels directly is in the aptly named Engine Drive mode. Engine Drive is most efficient at speeds of between 120-140km/h. The CR-V Hybrid’s top speed is attained in hybrid mode. Honda has linked via a clutch the engine and propulsion electric motor so that every moving component that needs to be connected is. Under the bonnet is the petrol engine, propulsion motor, generator motor and power control unit. The rechargeable lithium-ion battery pack is housed under the rear bench and this position rules out a seven seat hybrid version. In the spacious cabin that is built on the new Civic’s platform, the driver just needs to press a button to select drive and not pull a lever as in with the 1.5’s CVT auto box. 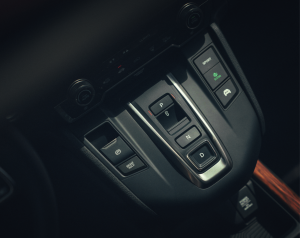 A press on the accelerator and off you go. When the batteries are not getting topped up enough from regenerative braking the engine sends power to the generator to boost the battery pack. The driver can put some input into how the car is propelled with a sport button that sharpens artificially the throttle response. There is an eco mode and an EV mode button that prioritises electric only motion. The EV electric button works with a light right foot and will use the battery until it’s out of charge. The electric only range is laughable at just 2km. The Honda system is best left to its own devices as it shuffles between modes depending on workload. At 60 km/h the power is roughly 50/50 between engine and battery. At 100 km/the Atkinson-cycle petrol engine is doing two thirds of the work and at maximum speed the car needs to be in hybrid drive. Honda has specifically tuned a rising engine note that can be heard in the cabin under acceleration and this was done to suit European tastes. 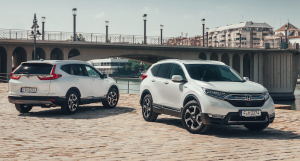 The CR-V Hybrid starts up in electric mode in silence. The engine will cut in if you provoke it but it is whisper quiet compared to a diesel unit. In stop start traffic the five seater is a joy to use as it seamlessly and without fuss makes progress. The Honda delivers a silky smooth transitions between the various driving and power modes that are barely noticeable. The big, comfortable and easy to access cabin is swept along in near silence thanks the quiet petrol engine and silent electric motor but also Honda’s new noise cancelling technology that works in a similar way to other systems via the cars speakers. The Hybrid is a great cruiser that eats up distances. The hybrid gets a new drivers instrument interface display and all the other toys available in the regular CR-V like the optional HUD. The idiosyncratic Honda centre touch screen remains tricky to get your head around. Once mastered, the CR-V goes about its business without requiring much effort from the driver. Two wheel drive versions will be the most popular but we also took the all wheel drive for a test. The all wheel drive system uses a prop shaft connecting the rear drive shafts and takes power from the engine and electric propulsion motor as with the FWD version. To aid off road use the AWD hybrid rides 10mm higher. The hybrid’s boot shrinks from 561 litres to 497 litres and the other major downside with hybrid versus petrol only model is the hybrid’s relatively poor towing performance. The CR-V Hybrid can tow a humble 600kgs or just 750kgs braked, so big caravans and horse boxes are out. 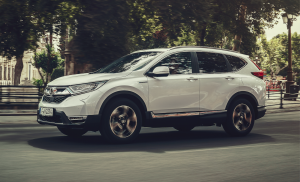 CR-V Hybrid starts from €38,000 including grants. Trim levels are; comfort (FWD only), lifestyle, elegance and executive AWD automatic topping the range at €49,500. The entry petrol powered 173hp CR-V has a manual gearbox so the realistic like-for-like price walk from the more powerful 193hp 1.5 automatic to CR-V hybrid is roughly €2,500. Honda Ireland expects 65 to 70 per cent of CR-V sales to be hybrid, out of a total annual sales of 500. Honda says it sees a shifting demand and estimates that by 2021 diesel will account for 46 per cent of the compact SUV class with petrol at 33 per cent and alternative fuel at 21 per cent from just 6 per cent in 2018. By 2025 two thirds of Honda’s vehicles will have an electrified power train. Honda says the new CR-V Hybrid is basically and electric car running on petrol.

The CR-V Hybrid is a good family car packed with technology that is also soothing to drive.