Trending
You are at:Home»Reviews»Hyundai Ioniq Electric review
By Michael Sheridan on 05/04/2020 Reviews

The second generation Ioniq takes a good step forward with an improved driving range at its core. Its cabin gets a welcome overhaul too that brings it more upmarket. The original’s cabin was dull and cheap and now its quite impressive. Hyundai’s compact green car is particularly interesting as it comes in three forms to suit most needs. There is a petrol hybrid, a PHEV plug in hybrid and the most interesting is the one we’re testing this week the Ioniq Electric. 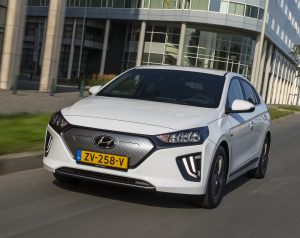 Hyundai’s most affordable EV has seating for up to five at a squeeze. The Ioniq Electric is powered by a 100kW motor (134hp) that turns the front wheels. Horsepower is up from the original’s 119hp but pulling power or torque remains unchanged at 295nm. 0-100km takes a rather pedestrian (for an EV) 9.7 seconds. The teardrop exterior shape continues with some nice smooth surfacing and while the Ioniq may not be an oil painting, its not offensive to look at. Under the skin the suspension and most other bits and pieces are unchanged. 16 inch wheels are standard and the ride quality can be describes as pretty good for an weighty EV. 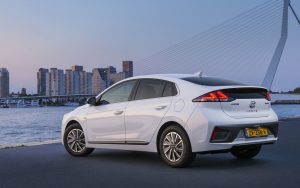 The lithium-ion polymer battery pack capacity is increased from 28kWh to 38.3kWh. This bigger battery delivers a more acceptable range of up to 312km (WLTP). This best/ideal weather conditions range figure falls short of the latest 400km EV brigade but they cost more and have larger battery packs too. The car’s on board (AC) charger is uprated to 7.2kW – this is the rate it can take electricity in and convert to DC electricity to be stored in the battery pack. To do a full charge from empty at a 7.2kW charge point takes six hours and five minutes. Most of the newer home charge points are rated at 7.2kW. 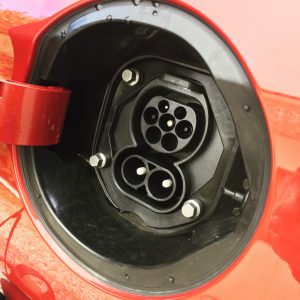 The Ioniq Electric’s plug socket is on the nearside-rear, behind a fuel filler cap that is opened via a cabin button to the driver’s righthand side . When plugged in to a CCS rapid charger (Combo plug) it can get to an 80% charge in less than an hour. The standard Ioniq Electric’s rapid charge port is rated at 50kW. A type 2 cable and three pin cable are supplied as standard. Three blue lights on the top of the dash (at the base of the windscreen) indicate the car’s charging status. 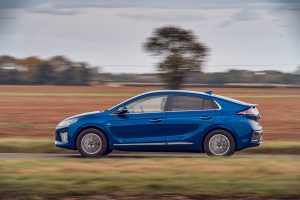 Regenerative braking features as with Kona Electric. Ioniq has steering wheel paddle shifters with four levels/degrees (3 displayed) of motor braking force selectable. you can also switch all off and this delivers an a free-wheeling-like experience on the road. Pull and hold the left paddle and maximum regenerative braking is engaged and this setting can bring the Ioniq to a full stop – without using the brake pedal. We particularly enjoyed the paddles and interacted with them during most test drives.

You can, of course, just drive and not get involved in the nerdy world of managing regeneration but where’s the fun in that! The Ioniq electric is very easy to use. A simple push of a button can select the drive mode: normal, eco and sport and to engage a hear again you simply press a button –  D for drive, N (neutral), P for park or R (reverse). An electronic hand brake with a selectable auto hold function is standard too. 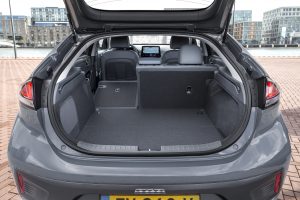 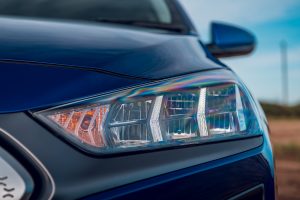 LED running lights and headlights (dip and main beam) are now standard to make night driving much easier. A slick and impressive 10.25 inch touch screen that houses the navigation and sound system dominates the revised dash. The new interior is a big improvement and the materials and plastic used feature a lot of recycled materials. A niggle was glare on the windscreen caused by the light grey dash top material. At modest speeds the cabin is quiet but on the open road the cabins gets noisy with a lot of road and tyre noise. Savings have clearly been made on sound insulation. Bumps and other road imperfections were also picked up in a noticeable harsh way but on smooth roads the fairly basic suspension set up drew little attention to itself. 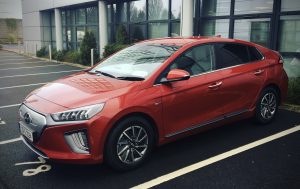 Our March in Ireland testing window delivered some lowish temperatures but no extreme weather. As with all EVs we expected Ioniq Electric’s range to fall short of its quoted 312km. Often the trip computer would suggest we used close to 50% of the car’s battery capacity for a little over 100kms travelled. We drove in ‘eco’ mode a lot of the time on a mix of roads including some motorway we averaged between 15.5-18kW per 100km and that’s pretty good economy. Every now and then we’d drive in ‘normal’ with no particular allowances made to conserve energy so we’d used the heated seats and steering wheel as needed and auto air con, and on similar routes we averaged circa 18-19 kW/100km. 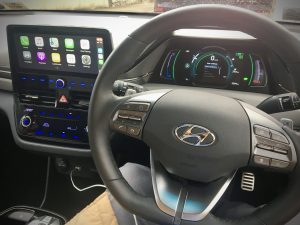