Trending
You are at:Home»Reviews»Hyundai Kona Electric review
By Michael Sheridan on 11/03/2019 Reviews 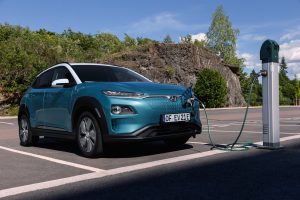 Range anxiety in an electric car is no longer an issue with the Hyundai Kona Electric.

That’s a big statement but Kona’s big rechargeable battery really does deliver a usable driving range. According to Hyundai it’s 64kWh battery serves up over 449kms (WLTP) on a full charge (that’s 546kms using the old NEDC measure). I put the compact SUV to the test and drove it with little regard to the precious electricity stored in its underfloor battery pack. 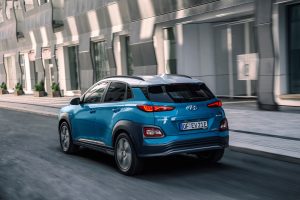 I got out of a 280hp hot hatch that was brisk and fun and in to the Kona Electric that was fun too, sprinting 0-100km/h in just 7.6 seconds. Kona Electric like all EVs takes off from a standing start like a shoplifter spotted by security. The Kona Electric is not as much fun as a hot hatch on the twisty bits but wow it pulls like a train with 395nm of torque. It’s top speed is a relatively modest 167km/h but we must remember Kona Electric is a family car not a sports car. My test car’s range read 423kms wen I got in so off I set into the inner city from the outskirts to see how it would handle traffic. Stop start traffic flow is where electric cars are at their best. When they move they use power but when stopped they don’t… well okay they still use some and in the Kona Electric the kitchen sink is standard and it should be with a starting price of €37,630 after grants etc. It was a chilly day so I had the heated seat (s), heated steering wheel and heat pump heater on (I didn’t use or need the air conditioning). Three driving modes feature: Eco, Comfort and Sport. Eco allows motorway speeds but reduces other draws on the power, Comfort is another word for normal and Sport sharpens the throttle and encourages more rapid driving. The Kona Electric is very quick but can also be driven in a stress free manner in near silence. As with all EVs there are new sounds to be listened to as the din of an internal combustion engine is absent. A slight turbine whine is the overriding noise and outside there is a slight sound generated for safety reasons. 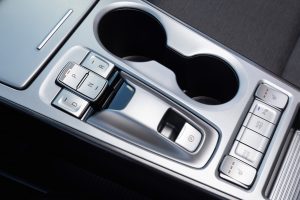 The car is easy to use. There is a starter button and a number of transmission buttons like D for drive R (reverse), N (neutral) and P for park. An electronic handbrake features and there is also a brake hold button that is great in stop start traffic when you don’t want to roll back or forward for that matter! Stop start in an ‘engined’ car can be quite tedious and this is one of the great contrasts that EVs provide. After finding a parking spot and maneuvering in with the aid of its reversing camera I popped in to the national radio station I was appearing on. After chatting with Matt Copper and his 140,000+ listeners I got back in to the Kona Electric and headed for the foothills of the Dublin mountains to collect daughter number 2. The traffic was still bad but listening to the rest of The Last Word radio show on Today FM eased me along. The pulling power generated by electric motors puts 3 litre diesels to shame and giving the accelerator pedal a dart going up hills is a lot of fun. Acceleration is instant as unlike a lot of turbo charged cars the revs have to build to deliver power. With my passenger secured, it was off home via the motorway. When I switched off the EV in Wicklow I deliberately did not plug the car in to charge in my home charger, I wanted to test the real world range and more importantly the real world use. 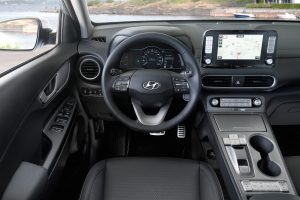 The following morning I dropped daughter number 2 to her part time job in Dublin. She was cutting it fine so I didn’t spare the horses. The Kona ate the motorway kilometres and the range prediction from the trip computer seemed fairly accurate and predictably progressive. A quick turn around at the location and I was heading back to Wicklow to meet up with former Ireland rugby coach Philip Doyle to interview him for a motorcycle feature. He was on his big GS1200 BMW trail bike and at times found it hard to keep up with the five seat SUV at times. Every now and then I floored the Kona en route to a photo shoot and in fairness to ‘Goose’ it was on roads I knew and he didn’t. After the shoot I brought him for a quick spin – in Sport mode of course, and he could not get over the way the EV performed. The lack of gear shifts and engine noise freaked him out most. Overall he was really impressed by the Korean machine. Later after bashing the story out on the keyboard I went up to Dublin again to collect my worker. When we got home, again, I didn’t charge the car. 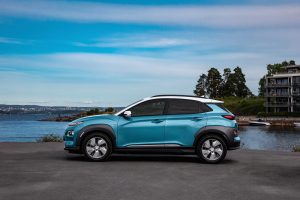 The next day she who must be obeyed wanted to go to Ikea and we headed off knowing we would not have enough range to do the circa  140km round trip. About 50 kilometres from Ikea I started to drive more economically. Dropping speed is the key to economy as aerodynamics kick in above 80km/h. Surprisingly there was no charger at Ikea and after we bought half the store we started to plan where to charge on the route home – staying as close to the direct route as possible. Eventually we caved and headed to a Luas station with about 20km range left. We found a fast charger occupied by a Nissa Leaf and ended up using the one remaining working standard charge point (one was out of order and two others were occupied). A nearby charging PHEV Mini drew a few choice words from me – you get very territorial in an EV when it comes to plug in hybrids! A painfully long wait with no services nearby saw the charge rise closer to the require 39km to get us home. Eventually with 37km indicated I had to move. I drove like a Nun home and rarely went over 95km/h. We made it home with 2km range and some historical laughing as my better half thought we wouldn’t make it and should have charged in another station along the way! I plugged the car in at my eCars domestic charge point at lunchtime and expected it to be fully charged by the morning. Hyundai quotes 9’35” for a full charge at a 7.2KW charger – not to be confused with a less powerful domestic charger! 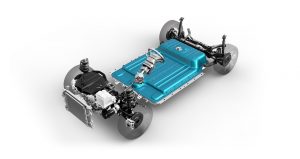 At 8am the following morning it had 92%. Early EVs with smaller range and battery packs happily charge overnight at a home charger but with greater battery capacity the home charger simply has to work longer as it has limited capacity to deliver electricity to its charge point. A couple of hours later I had a range of 400km and did a couple of return runs to Dublin – both times circa 100km came off the range from about 80km actual distance – not bad. I plugged in the car that evening with just shy of 200km range displayed. 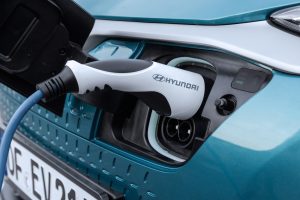 The following day I came out Expecting to find a fully charged car but guess what? My charger, for no apparent reason, had shut off at some early stage so the juice I had expected to have in the batteries never appeared. Home EV chargers can only deliver single phase electricity to a car at a rate that is less than a fast charger. The comparison between a domestic EV charge point and a fast charger is best described as the water flow from a garden hose and a Fire Engine’s hose. The lesson to remember is that while the Kona electric has a great range – when full, to really enjoy that range you will always need to keep it topped up. 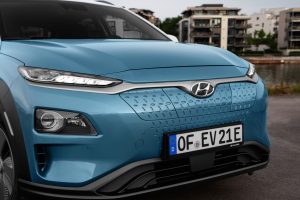 So we know the Kona Electric is a terrific machine but it has also shown us that charging unlike filling with petrol or diesel cannot be taken for granted. Apart from the occasional power cut on the national or regional grid there are other issues to keep in mind. Chargers whether at home, place of work or public can develop faults. The public network cannot be relied upon to have free spaces either thanks to the increasing popularity of EVs. The tempting tax breaks offered are making a lot of employees consider electric cars. The Kona Electric is great but just remember to charge it up every night and you’ll be fine.