Trending
You are at:Home»Reviews»Hyundai Kona Hybrid review
By Michael Sheridan on 30/08/2020 Reviews 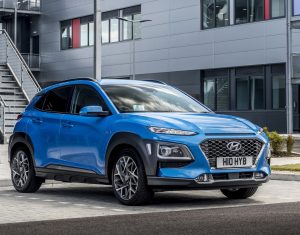 The Hyundai Kona is a very popular sub-compact SUV crossover in its own right. The fact that it is available in multi fuel versions is a real bonus. The electric (BEV) Kona is adored by its owners but is a pricey proposition at just under 40 grand (net of grants) especially when you compare it to the 1 litre petrol powered Kona that’s roughly half the price. So is there a middle ground? 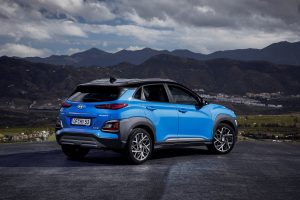 Our test car this week is the Kona Hybrid and it splits the difference between the electric and petrol only versions. The well equipped Kona Hybrid starts from €29,245 and is powered by a 1.6 litre turbo charged petrol engine assisted by a battery powered electric motor. It uses a six-speed automatic gearbox to deliver power to the front wheels. Emissions are very low and fall in to band A4 (NEDC 101g/CO2 WLTP 122g). The Hybrid is dearer than the outgoing 1.6 litre diesel Kona (from €23,745) favoured by commuters and looks to fill its boots. 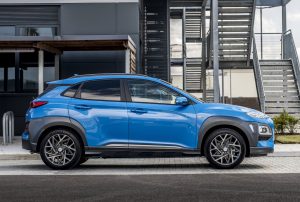 It looks the part and is one if not the most attractive cars in its class. Hyundai over recent years has lured some very well known European designers from premium brands and the fruits of their labour can be seen in the Kona when it was first launched in 2017. You could put an Audi badge on its exterior and it wouldn’t look out of place. Our test car’s chunky good looks are helped by nice 18 inch alloy wheels that fill out the arches well. Colour coding and some faux off road features add a sense of the adventurer to the Korean giant’s smallest SUV. 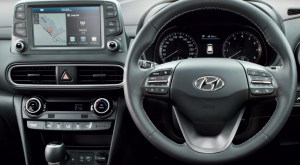 Inside cabin space is good for the class with seating for up to five. There is a nice leather steering wheel, a 7 inch touch screen display (a 10.25 is available in other markets) and overall it is an airy place with good all round visibility too. 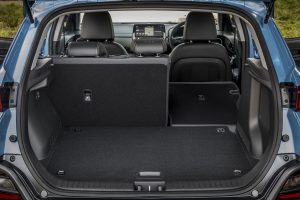 The dash layout is good but you can see where money has been saved in what is a very price sensitive end of the market. As a rule dashboards are complex (200+ components) and therefore one of the most expensive elements in a car. You can save a lot of money by using cheaper materials and the Kona, like so many cars in its class, uses a lot of hard and dark plastic. The only lift is from a few white plastic surrounds on the air vents and centre of the dash. 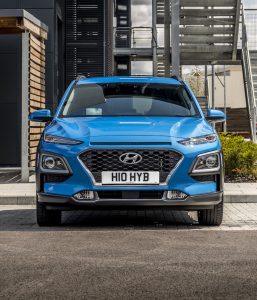 The Hybrid comes in ‘Executive’ grade and there is also an optional two tone exterior paint variant. There are lots of toys and creature comforts as standard such as heated seats, smart phone connectivity (CarPlay and Android Auto), climate control air conditioning (with a driver zone) plus a host of safety features like: auto hold electronic parking brake, hill start assist, lane keeping assist, forward collision avoidance, reversing camera and even a noise generator (VESS) for when the car is running near silent in electric only mode. 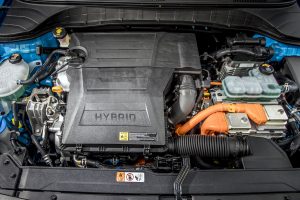 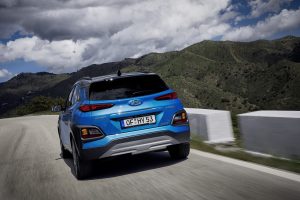 On the road the auto delivers progress and this is not always achievable in relatively lightweight cars. Power is sufficient with no need to press hard on the accelerator. All sorts of traffic can be tackled with little fuss in the Hybrid. Kona’s compact proportions means general urban use is a doddle. Unlike the petrol Kona the Hybrid gets a more sophisticated rear axle that features a multi-link set up. This delivers a greater degree of ride comfort. Via the display screens you can see what the hybrid system is doing and when it is running under engine power, electric or recharging its battery but you have no physical control over when this happens (apart from your driving style). Two equal size fuel gauges display petrol reserves and electricity reserves. 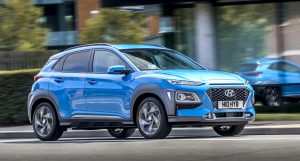 The Hyundai Kona, named after a Hawaiian district, makes most sense at its entry price point where its starts from €21,745 – excellent value for money. After that, Kona makes sense as a full EV (from €39,995). The Kona Hybrid starts at €29,245 and this is an awkward price point as there are so many other new cars on the market that offer as much if not more across a variety of classes. To put the Kona Hybrid’s price further in context a Hyundai Tucson starts from €27,995.

Next year the Kona will get a mid-life-cycle makeover that will see some styling tweaks. The Kona Hybrid is very good but will be a niche model in the range.