Trending
You are at:Home»Reviews»Hyundai Kona review
By Michael Sheridan on 15/12/2017 Reviews 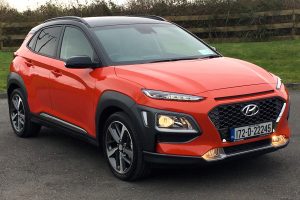 Hyundai means business with its new Kona SUV crossover. Named after a district in Hawaii, the car is built on essentially the i30’s underpinnings – so you’d expect it to go up against its own top selling Tucson, but its doesn’t. The five-seater is priced to compete in the category below that are based on small car platforms. Starting from €20,995… it has our attention. 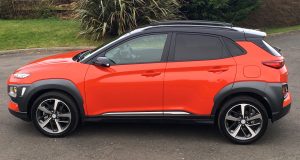 I first saw the Hyundai Kona at the Frankfurt motor show its exterior seemed a little fussy with lots of plastic cladding. It seemed to be trying too hard to appear chunky and tough. A host of other new compact crossovers were also on display like the SEAT Arona, Skoda Karoq and VW T-Rok to name a few and these were more of an instant like. After a week testing the new Kona in Ireland its styling has grown on me. 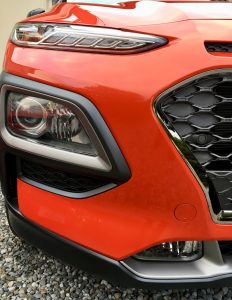 The front end is ‘a light fest’ with lots of lamps either side of its imposing grille. It is the subtle yet striking horizontal air intake above it that really gives the new machine its identity on the street. The lights in terms of functionality are only average and the LED running lights contrast with the yellow of the headlights. When viewed side-on the flanks are dominated by the plastic cladding around the bulging wheel arches. The rear C pillar follows the current styling trend that works well with the two tone option. 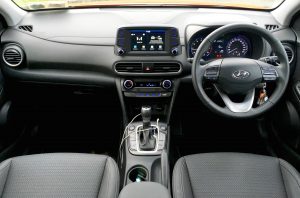 Inside the cabin features a lot of plastics but they are less nasty than you’d expect at this price point. The cabin feels wide and spacious for the class and the level of comfort in my range topping test car impressed me greatly. The layout of the interior is absolutely fine and better than many of its rivals and again represents excellent value for money. There is a floating centre screen that is bang on trend in the crossover class. Apple CarPlay and Android Auto are available on all models bar the entry model. Leather and a pop-up head up display are also available. 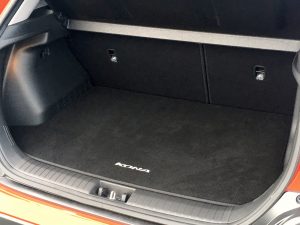 The boot is where you will see the difference between the Kona with its 361 litres (1,143 seats down) and larger Hyundai Tucson’s 513 litres (priced from €26,245). The Kona loses out in boot space next to rivals like the SEAT Arona (400 litres) and Citroen C3 Aircross with its expandable 410-520 litre when the rear seats pushed forward.

My test car – a four wheel drive (4X4) 1.6 petrol automatic is not the first choice for Irish buyers on a budget, in fact it’s probably the last. Priced from €29,995 and in level 3 premium trim it is a relatively affordable all wheel drive machine – but it is fair to say Ireland was not one of Hyundai’s target markets for this version. 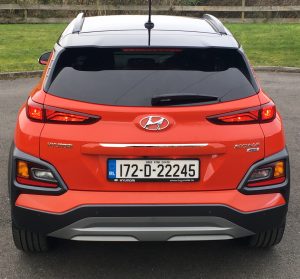 On the road the 4X4 Kona is composed to a degree that shames most of the segment. The ride is firm but good and displays a degree of sophistication than most of its rivals based on superminis can’t match. My 1.6 test car rides differently to the 1 litre. This is thanks to having Hyundai’s four wheel drive system that comes a multi-link rear suspension set up. The 1 litre gets a basic torsion beam rear suspension setup like most of its rivals. I haven’t tested this version. 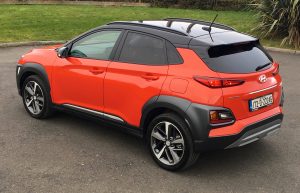 Back in my range topping car speed bumps were dispatched easily. Often these abominations show up poor suspension, yet my vehicle impressed here. Steering is average and you certainly won’t feel the need to take the long way home but you will feel content that you have made a pretty good selection in a compact crossover.

The Hyundai Kona is a good machine that represents great value for money.