Trending
You are at:Home»Reviews»Jaguar I-Pace review
By Michael Sheridan on 17/12/2018 Reviews 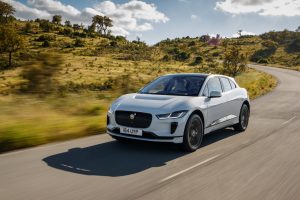 Jaguar’s ‘Pace’ SUV family has grown with the all electric I-Pace. The mid-sized F-Pace was the first Jag SUV on the scene followed by the compact E-Pace. The latest offering isn’t cheap at over 80 grand but is at the cutting edge of design and engineering. The exterior design of the five seat SUV crossover is striking no matter how it is shifted along – but the fact the car is an EV is a bonus for buyers who can claim the moral high ground in something that looks utterly gorgeous. 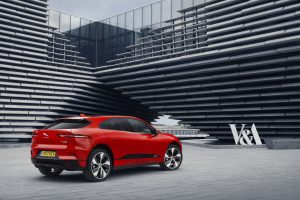 The fact the car looks great is no surprise, Jag’s Ian Callum is an excellent designer and car nut who I always enjoy meeting and chatting car design with. The affable Scot has done a great job with the crayons and the acid test is that the I-Pace looks so normal I had to explain to lots of people that it didn’t have an internal combustion engine engine and was powered solely by electricity. Some EVs scream they are different and this can be off putting to buyers again the Jaguar is beautifully cohesive and well proportioned in its styling. Of course there a few party tricks that deliver instant gratification, like the pop out door handles, but in truth the car doesn’t need them.

The electric power is full of low end torque and the 0-100km/h sprint takes 4.8 seconds. The I-Pace is weighty but has a good sized 60kWh rechargeable battery that gives the big beast a real world usable commuting range of about 300km from a full charge. Jaguar states a range of up to 470km using WLTP. Any high rise machine that can hustle along is always impressive. Aerodynamics are helped by the car being more crossover in appearance and less giant breeze block when cutting through the air. On the open road the I-Pace is a sublime cruiser. 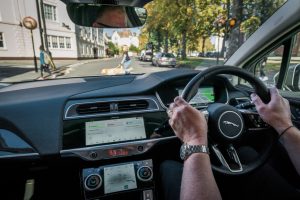 Inside, the five seater’s cabin the quality and layout is impressive. There is a well considered dash display with the obligatory touch controls. There is a distinct hint of JLR group rival Range Rover Velar to the dash. There isn’t a comparable Tesla model but if there were the Jag would be the hands down leader. Its an EV built by a car company not a tech company building a car. Tesla and Elon Musk are pioneers (and I worship at the alter) but the simple fact is Europe’s premium car makers are streets ahead at actually ‘building’ cars and are rapidly catching up with Elon’s baby.

On the road the I-Pace has impressive grunt and delivers heaps of power to the driver. There are various drive modes you can select from, and of course an eco mode – that’s essential in all EVs. The charge port is behind a fuel filler cap on the nearside wing. The I-Pace has a socket layout that will take a regular AC43 on street charging and a DC fast charger plug too. With larger capacity batteries you need access to a fast charger to reduce range anxiety. It takes a full overnight charge to fill up the batteries at home using an installed domestic AC43 EV point. 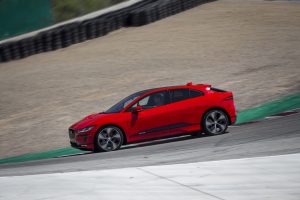 During my test the dreaded range anxiety hit a couple of times due to having to do longer runs without a full charge to start with. At one destination I went to plug in to a public charge point to find it had gone feral. I rang the provider and they said not to try to use it as when a machine goes rogue it is best left for a while to settle down – I’m paraphrasing a bit. I re-routed to another charge point indicated on my smart phone app and plugged in. Later I had to return to the ‘loopy’ charger as I needed to collector a passenger I had dropped off earlier. This time a Leaf was charging and the second charge port was free. I plugged in and the charge failed to begin (feck!) – then to add insult to injury the charger cable got stuck in the car’s socket and I had to ring tech support at Jaguar to find out how to access a release pull – otherwise I was going to be stranded with a cable dangling from the side of the car. Before you ask – the car wold not start with the cable in place so the notion of pulling the cable in the passenger window or winding it around the side mirror and making a dash for home was not on the cards. With the cable eventually released I was on my way again with enough charge to run the heated seat for my passenger and the air conditioning fan on the windscreen – it was a mucky rainy night as we say in Ireland, the type of night your own eyes would mist up! With better planning on my part I could have avoided some of the stress but it is still a factor EV buyers need to be aware of. 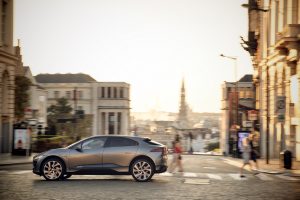 Jaguar is continuing its march towards the mainstream premium brands and they need to pay heed as the Tata owned British brand continues to build handsome and beautifully designed machines. The I-Pace is a fantastic machine and apart from a slightly lumpy ride quality on poorer surfaces. Overall the ride quality is better than most large EVs. I must admit I love the big cat. The Jaguar I-Pace isn’t cheap starting from €81,585 (inc. grants & VRT rebate) it is comparable with other premium SUVs and as premium EVs go – its one of the best… bear in mind Audi’s e-Tron SUV costs over €100,000.