Trending
You are at:Home»Reviews»KIA Ceed review
By Michael Sheridan on 22/08/2018 Reviews 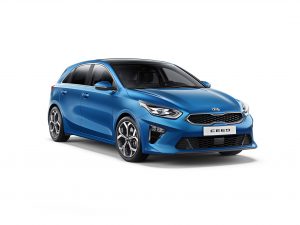 The Internet and its inner workings has seen KIA rename its cee’d to CEED. The change will ensure the car pops up more often during online searches. Silly apostrophe aside, the name actually stands for something; Community of Europe European Design.

The front wheel drive Frankfurt styled, Slovakian built machine has proven itself popular with over 1.28m sales since going on sale in 2007. The car KIA says is the centre of its portfolio, accounted for 16 per cent of the Korean firm’s sales in 2017, that is close to the very popular Sportage SUV. Despite the current SUV plague the compact car as a body type is still alive says KIA. In 2017 the C segment car accounted for 22 per cent of the European new car market. The squeeze is being felt courtesy of SUVs so the three door version is discontinued but the SW estate and hatch will go on and in exciting news will be joined by a highly styled shooting brake version later this year. 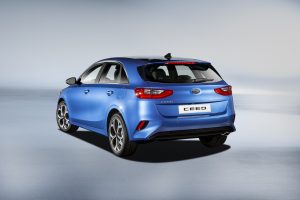 The third generation CEED gets sharper styling with stronger body lines replacing its more familiar curves. A couple of industry famous names were in charge of the crayons namely Gregory Guillaume, KIA’s European design head and Peter Schreyer, President of Design and Chief Design Officer of the Hyundai/KIA group. KIA says elements of the KIA Stinger flagship can be seen in the more humble CEED and yes the new car has a swagger that sees it step out of the shadows. The original cee’d was an anonymous machine that most would find hard to picture just like an old Corolla hatchback… no, I can’t either. The 2018 Ceed features the famed tiger nose grille with a wider intake underneath. The rear end is a striking departure and wouldn’t look out of place on a BMW. The car’s lines are more defined and assured, almost as if the CEED wants to be noticed. Built on KIA’a new K2 platform the CEED is now 23mm lower and 20mm wider. The hatchback’s length and 2,650mm wheelbase remain the same. When viewed side on there is a noticeable cab-rearward design that is the design-de-jour for premium models these days. The A pillar at the front has been moved 68mm rearwards and the glazed area has been redesigned accented by the straightened shoulder line. There is a 20mm shorter front overhang and a 20mm longer rear overhang. The SW sportswagon estate is near identical for cabin space but gains impressive space and capacity in the boot thanks to a longer 115mm overhang. Overall the CEED SW gains 95mm over the second generation SW. 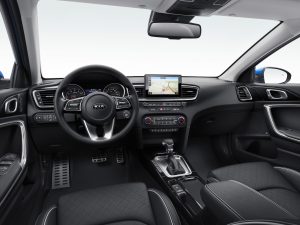 The cabin features an improved layout and higher quality materials. A more slimline split layout dashboard features. The main dash favours the drivers slightly in a similar way to VW’s Golf though its surfaces are not as flush. A new floating centre touch screen does a good job of bringing the CEED up to date with its rivals. A 7 inch screen is standard with an 8 inch on higher grades. The lower area of the dash houses the sound system with a JBL hi-fi with subwoofer an option plus heating/ventilation controls. The cabin feels larger despite the lower roofline and there is more shoulder room. The front seats are set slightly lower while the rear bench is 16mm lower. This change delivers similar headroom to the outgoing car but more rear knee and leg room for passengers.
Boot capacity rises by 15 litres in the hatch to 395 litres and by 97 litres in the SW to a very impressive 625 litres. Loading is made easier too with lower load lip heights on both versions. A split level boot floor features.
The SW’s rear 40/20/40 seats fold flat with the pull of levers mounted on either side in the boot. Luggage rails, an under floor storage box and bag hooks add to the car’s versatility plus the load cover can be stowed underfloor also. An optional smart power tailgate is a nice feature that opens the boot when the key is nearby thus saving the embarrassing leg wag of some rival systems. 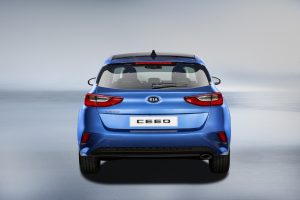 The CEED features level 2 autonomous driving ability, a first for a KIA. This means the compact car can keep in its lane and follow traffic. When activated the steering interventions are gentle and impressive, plus the adaptive cruise control works well. Standard safety equipment in the Slovakian built CEED includes; forward collision assist, lane keep assist, high beam assist and driver attention warning. All versions get alloys 16s or 17s depending on the grade plus a reversing camera. Connectivity is as you’d expect with any new model so wireless charging, Apple CarPlay and Anroid Auto are among the highlights. 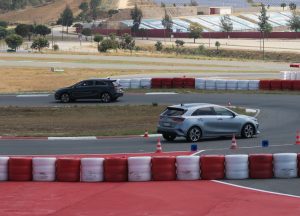 A new fully independent suspension set up features with the CEED. This brings the car in line with the best in it’s class in terms of ride and handling. The set up was tuned on European roads to deliver tighter body control when cornering plus higher stability at higher speed. We took to a test track to fling the car about and the suspension delivered a vice free front wheel drive experience. KIA has also revised the steering to make it more direct and it made the CEED feel at times nimble and entertaining to use. The lock to lock turn of the electric power steering has been tightened and requires less driver input.

Two new engines star with two carried over from the outgoing model. Initially two turbocharged petrol engines will be available; the carried over three cylinder 1 litre T-GDi with 120hp and 172nm that is a real live wire and a more powerful new Kappa 1.4 litre with 140hp and 242nm replacing the outgoing and less powerful 1.6 litre. Both Euro 6d compliment engines have particulate filters to reduce tailpipe emissions. The existing entry point 100hp/134nm 1.4 litre MPi will join the range some months after launch.
Diesel power comes from a new and ultra clean U3 engine. The turbocharged 1.6 litre CRDi exceeds Euro 6d emissions requirements. The new diesel is available in two power outputs; 115hp/280nm (NEDC 101g/CO2 or 99g ECO pack version), 136hp/300nm and 136hp/320nm in auto.
A mild hybrid CEED featuring KIA’s EcoDynamics+ 48 volt system will come on line in 2019 initially with a diesel engine to maximise further any CO2 reduction and later a petrol mild hybrid will be added. The system uses a starter/generation unit that extends engine time off with a clever moving stop start function. 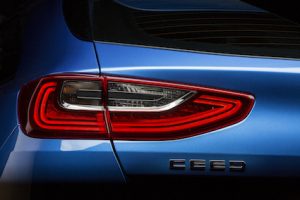 The Front wheel drive CEED comes with a six speed manual gearbox as standard and the existing seven speed double clutch automatic is carried over and available with the new 1.4 T-GDi and 1.6 CRDi engines. The auto is brilliant and suits the higher power CEEDs. sadly there are no paddle shifters but otherwise both autos we tested were as smooth as silk. The manual works really well in the 1 litre petrol but is less impressive in the 1.6 litre diesel.

The CEED has taken a leap forward in terms of ride quality and cabin comfort. The new suspension soaks up road imperfections well and the cabin is well insulated from the outside world. Twisty routes can be enjoyed behind the wheel and that’s not often said about KIAs – Stinger aside. The 1 litre is a hoot and in Ireland will initially come in the trim grade 3 (K4) only. The diesel CEED is much loved as a workhorse and will continue to do well. The 1.4 petrol will be available in the top K5 grade initially but if you throw in the auto gearbox you’ll have a great commuter that is a bit of fun too. 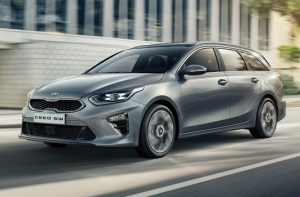 In Europe the KIA estate makes up a larger than class’s average 40 per cent of sales. Initially four trim levels will be available called K2, K3, K4 and K5 topping the range. KIA Ireland is not bringing in the entry K1 model that sits on grim 15 inch steel wheels but has chosen to start with the level two offering. Pricing starts from €22,695 for the 1 litre petrol and from €24,995 for the 1.6 litre diesel. The much improved KIA CEED, like all KIAs, comes with an excellent 7 year warranty. KIA expect to sell in excess of 1,000 units in a full year.