Trending
You are at:Home»Reviews»Kia Stonic review
By Michael Sheridan on 20/09/2017 Reviews 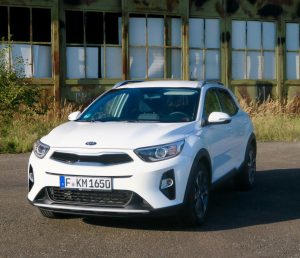 Kia is leading the charge towards small crossovers with its brand new Stonic. The Kia Rio-based machine spearheads the arrival of a host of totally new supermini based ‘B SUVs’ in the coming months. The likes of Citroen, Volkswagen and Seat will all try to unseat Ireland’s best selling Renault Captur in the ever growing B SUV segment. 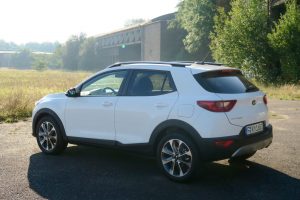 The new and highly fashionable sector currently accounts for 1.1 million new car sales in Europe each year – that’s roughly 7% of the entire new car market. This figure is due to grow to 2m plus sales annually by 2020. It seems everyone wants a crossover and the Kia Stonic, priced from €18,599, will tempt buyers to trade up from a small car or down from a compact C segment hatchback. 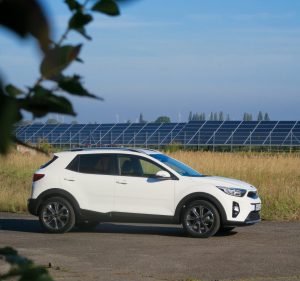 The Stonic was styled in Europe (Frankfurt) and is an instantly likeable five seater. Kia told me that the buyers in the B SUV sector are not particularly brand loyal and the main influence in their purchase is how the car looks primarily. The Stonic is based on the Rio’s platform and running gear so it has compact proportions. The front wheel drive only Stonic has a nice chunky exterior with some well thought out design touches and impressively short overhangs that add to its strong look. The driving position gives a great view of the road and the car is precise to steer and has a sporty suspension set up that makes the car surprisingly agile. 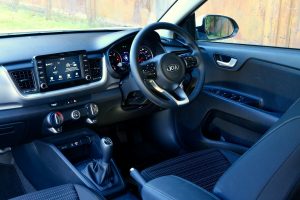 Inside, the cabin reflects the class, so there is lots of plastic on display and little sign of luxuries like Alcantara or soft leather, although a fake leather seat option is available. The hard plastics feel sturdy and the build quality is convincing. A 7 inch touch screen looks smart and sits high up in the dash. Smartphone users will be happy with Apple CarPlay and Android Auto featuring. Depending on grade a host of the latest electronic driving aids are available and this gives the Stonic a clear advantage over the class leading Captur. Boot space is a modest 353 litres (expandable to 1,155 litres) and this reminds you that the Stonic is based on a supermini and not on the larger Kia Ceed.
Kia Ireland is trying out a new and simplified grade naming structure with the Stonic to cut through the often mystifying names car firms use that we never get used to. The entry trim level is called K1 and it doesn’t get roof rails, the next grade is K2… can you guess where this is going? Yes of course you can – and this is a good thing. K3 gets the ability to colour mix the exterior paint and K4 features the highest performing petrol engine. 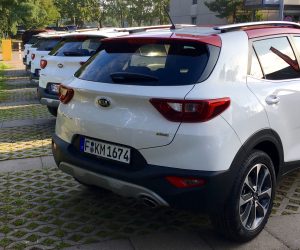 Powering the Stonic are traditional internal combustion engines – three petrol and one diesel. There is space in Stonic’s platform for a mild hybrid system but as I write there are no plans to build one yet. The entry price point is a 1.2 litre petrol with 84hp/122nm (we didn’t get to test this one), it’s followed by a smooth 1.4 litre with 100/133nm. The range topper is the 1 litre petrol T-GDI (turbocharged), three cylinder with 120hp and 172nm. A 1.6 litre diesel is the oil burner on offer ideal for those who commute with its 110hp and 260nm of pulling power for less than €25K. 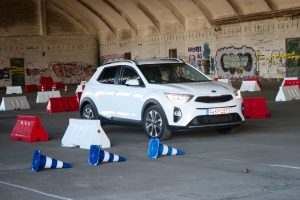 On the roads in and around Berlin the Stonic was agile and easy to use. We not to an abandoned air base to put the car through some more tests including a tight manoeuvring course and the car performed well. The steering has been tuned to deliver a quick response. The Stonic has a tight turning circle and takes 2.52 turns lock to lock. We carried out a high speed lane change on a skid pan and the car managed it without any difficulty too.

Kia is part of the Hyundai/Kia motor group, the fifth largest car maker in the world. Hyundai, the senior sibling, is launching a similar sized Kona crossover around this time too, but unlike so many cars from the Korean motor group, the Stonic and Kona do not share platforms. The Kona is i30 based and is going to be a global car, plus the Kona was designed to take a four wheel drive option and more powerful engines too. 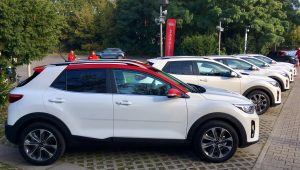 The sales target for all in the sector is the Renault Captur that leads the class in Ireland by a huge margin. Nissan’s Juke, Opel’s Mokka X, Opel’s Crossland X and Peugeot’s 2008 are notable rivals. Volkswagen’s T-Roc (from €24,750, 1 litre 115hp) and Seat Arona will shake things up too when they arrive shortly and let’s not forget the very cute Citroen C3 Aircross. My gut says 2018 is going to be a big year for this type of car and the Stonic is a very impressive effort at a very good price. Kia Ireland expects 76% of Stonic sales to be petrol powered and this reflects the fuels return to popularity. Renault Captur sales are nearly all diesel powered at present and this may be more to do with CO2 emissions. CO2 reduction is a big driver in what type of car manufacturers sell us. By 2020 all manufacturers must average no more than 95g/CO2 emissions across their ranges. 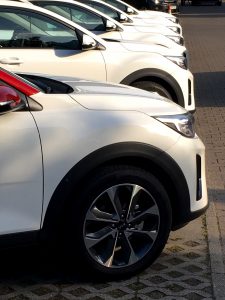 In a full year Kia says the Stonic should sell 1,000+ in Ireland. Kia Ireland tells me the 1.4 litre will be the big seller in Ireland in K2 or K3 guise.
The Stonic as a machine impressed me greatly. It has personality, a chunky cuteness, good looks and that is exactly what drivers want in this sector.