Trending
You are at:Home»Reviews»Kia XCeed review
By Michael Sheridan on 06/10/2019 Reviews 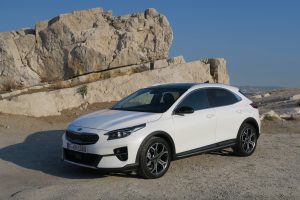 The XCeed is a crossover that fills a need that no one knew existed…except Kia! The mildly rugged looking five door is not quite a hatchback yet not tall enough to be an SUV. Built on the Ceed platform the XCeed is a crossover and this body style has only really started to emerge in the last three years. According to new research shown to Motorhub by the vibrant South Korean brand we can expect to see more and more crossovers coming on stream. 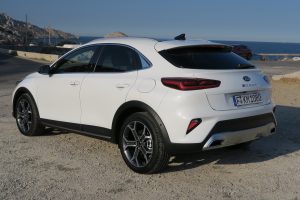 Unlike SUVs where practicality is high on the wish list – with crossovers its exterior design! Twenty years ago an SUV had to have off road ability and look rugged – nowadays nearly all the popular SUVs are front wheel drive and never see muck let alone go off road on purpose! The urban jungle is where the XCeed hopes to thrive. Its exterior design looks sturdy but is lower set than an SUV yet it doesn’t take up much road space. The XCeed’s crossover styling came about as the result of Kia finding out that the runaway number one ‘ask’ from crossover buyers at 64% is exterior styling. To give you an idea of its proportions its similar insize to the Mercedes-Benz GLA. 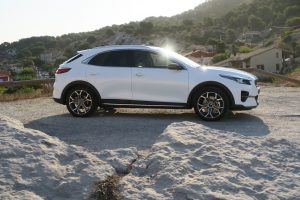 The XCeed is built on the Kia’s K2 platform that underpins all of the Ceed range. The tallest car in the family joins the hatchback, SW estate and shooting brake Proceed as a niche model. In the flesh the XCeed sits a little taller on the road with a ride height of between 174-184mm depending on wheel size – that is some 43mm more than the Ceed. Longer springs and dampers feature alongside a taller diametre wheel/tyre combination to give this height. It also has a wider  stance than the hatch with nicely bulging wheel arches. 16 or 18 inch alloys and high profile tyre combinations fill out the arches and also help the ride quality. Roof rails are standard and there is a faux skid plate and a nice new grille to help the XCeed stand out from its siblings. The XCeed at 4,395mm is longer than the hatch but sits on the same wheelbase. The added length is from longer front and rear overhangs. The XCeed fits in nicely between the Ceed and the Sportage SUV in terms of height so its deserves the crossover banner. 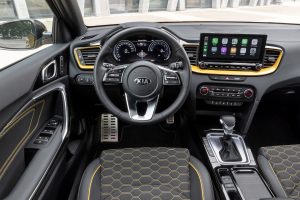 Inside the cabin the five seater is well appointed. Foiuyr adults fit comfortably although it is a little tight in the rear. the boot is 31 litres bigger than th hatch and has a split floor too. Boot space is 426 litres expandable to 1,378litres. Three grades are available in Ireland K2, K3 and guess what… K4. The top grade gets nice digital displays and for the first time in a Kia a driver’s all-digital display – very Audi! A contrasting yellow stitching option is one that should be ticked as it livens-up an otherwise conventional cabin. All of the ADAS safety driving aids and electronic assistance systems from the Ceed are available in the XCeed plus the XCeed is prepared and compatible with Kia’s next level of on line connected driving that will filter down from Kia’s E cars to the rest of its newest models in the coming months and years. 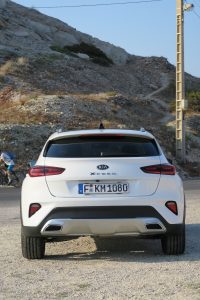 On the road we drove the 1.4 petrol and 1.6 litre diesel in and around France’s second city. Marseilles can be stunningly beautiful yet rugged and rough at the same time. The eclectic road network tested the suspension and ride qualities of XCeed at times and the Kia coped well with the urban jungle. Both engines performed exactly as you’d expect with the diesel managing to merely sip fuel. Traffic calming and poor roads were not a problem and the fear of bottoming out after a speed hump (or on the approach) was never considered thanks to XCeed’s ride height and good suspension travel. The XCeed has been tuned to deliver as much hatchback-like handling as its raised centre of gravity will allow. The Ceed handles very well and the XCeed offers a slightly softer ride that has a more comfort based charm. Cornering is quite flat and there is little roll or pitching to be had that you’d get in a taller SUV. The driving position is tall enough to make driving in traffic a little less stressful than low down in a hatch. The new car also gets hydraulic bump stops on the front shock absorbers to help the suspension cope with rougher surfaces. Yikes it really is a crossover, offering the best of both worlds. 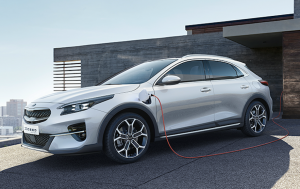 The Frankfurt designed XCeed is produced in Zilina, Slovinia and will be sold exclusively in the European market. All engine offerings are turbocharged and include petrol, diesel and plug in hybrid power. The big selling petrol will be the 120hp, three cylinder, 1 litre manual. A 1.4 may come to Ireland if there is enough demand. A four cylinder 1.6 CRDi diesel is available in two power output – again Ireland will get the lower power version only. It comes with a six speed manual or optional automatic. The PHEV plug in petrol hybrid will be available from January and will be a big seller. 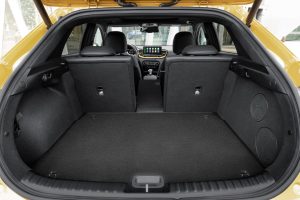 The XCeed is an interesting machine that has many compact hatchback attributes yet has many SUV traits too. The XCeed pricing starts from €26,245 (1 litre manual K2). That’s more than the hatch (€22,695) but less than the Proceed at €28,946.