Trending
You are at:Home»Reviews»Land Rover Discovery review
By Michael Sheridan on 26/11/2017 Reviews 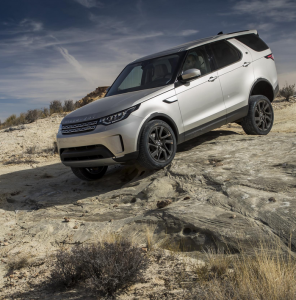 The workhorse of the premium SUV class is the Land Rover Discovery. The big 5 or seven seat Landy has go anywhere ability with premium comfort thrown in. The big bus features new exterior styling from the pen of Massimo Frascella, a fresh interior features too plus there are tons of new driving aids. The entry engine is no longer a V6 – instead a four cylinder sits under the bonnet. Can the new Ingenium diesel engine range do the job? We’ve been testing the beast to find that out and more. 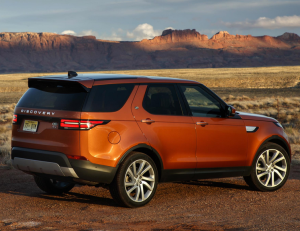 Imposing best describes the new and up to 430kgs lighter Discovery. The new styling is distinctive and more aerodynamic. There is no way when you are behind the wheel that you’ll be seen as a shrinking violet. My test car featured air suspension too, so I could set the car ride height for access, normal or off road altitude. I must admit to using off road height (+75mm) a lot in slow traffic simply because I could and also because it gives brilliant vision of the road ahead. At higher speed the car drops to normal height to aid dynamics and fuel consumption. The rear and in particular the tailgate is the big talking point and it’s a marmite issue. The offset number plate divides opinion and to such a degree in fact that the chief designer has had to issue advice to UK buyers to fit smaller number plates (similar to ours in Ireland) to make the best of the rear’s appearance. 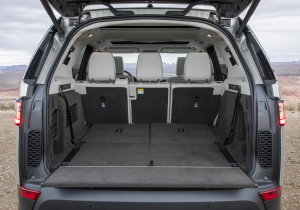 The auto open and closing split tailgate in my HSE (level 3) test car features a fold out section that covers the area of the bumper overhang. The steel cable (I presume) sounded a little worse for wear and similar to a tackle and block pully that’s on the verge of snapping. My seven seater (258 litre boot) is a great family bus. When configured as a five seater it has a massive flat loading area. With all the rear seats folded there is a whopping 2,400 litres of cargo space. 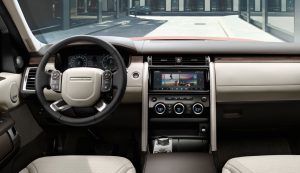 The officially ‘Range Rover quiet’ cabin is huge and the seating suitable for even American frames (that’s me!). The HSE features foldable armrests on the inside of the front two seats and they were a bit redundant as the center console is broad and covered in soft material and the doors also feature good armrests too. There are plenty of cubbies and the centre console has nice hidden ones too. 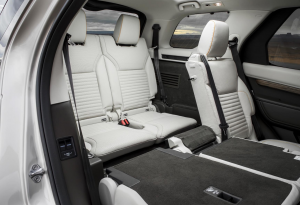 The controls for the automatic gearbox and off road selector are carried over and the centre dash features a much improved, larger touch screen. Sadly Jaguar Land Rover hasn’t nailed down the rights to use Apple CarPlay and Android Auto so connectivity for my smart phone was by Bluetooth. A host of USBs are available and you can also connect a phone as an iPod for audio purposes. A really clever option that you won’t see in the cabin but on your wrist is the activity key – an waterproof electronic car key that is worn like a watch – so when your out and about jogging or whatever floats your boat you don’t have to carry your bulky keys.

On road, my €86,250 (inc. posh paint) 240hp/500nm top of the range Ingenium engine pulled well and could really shift when provoked. Weight distribution is a near perfect 50/50 and the ride quality is very comfortable on the HSE’s air suspension. When cornering there is a bit of roll – but hey this is a large SUV not a sportscar. 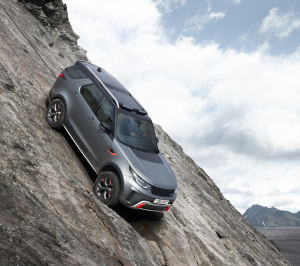 Off road, the Discovery has a 900mm wading depth ability and impressive steep approach and departure angles. On the range topping First Edition model there is ATPC (all terrain progress control). It is a form of autonomous adaptive cruise control but for off road. When activated by a couple of buttons the car assesses the terrain and then moves off applying the best traction it can deliver. The driver can set the max speed the car will attain – the system can also control descents at a controlled speed too – with the driver’s feet off the pedals completely.

The new Discovery is capable of good fuel economy also and delivered a sub 8 l/100km when I occasionally drove like a saint. The fact the engine was a four and not a six played a bit on my mind and I know many buyers of large SUVs are also obsessed with big engines – so only time will tell how well the unit does in the big Landy. The entry Ingenium produces 180hp/430nm and is capable of even less fuel consumption. Thankfully a diesel V6 is still available with 258hp and a supercharged V6 petrol tops the range. 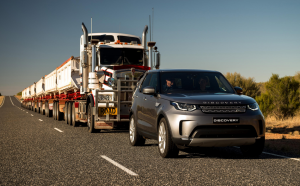 Up to 3,500kgs can be towed and this will impress the twin horsebox brigade. The Discovery can tow more when asked… a 110 tonne road train was towed as a PR stunt in Australia recently.