Trending
You are at:Home»Reviews»Mazda MX-5 30th Anniversary review
By Michael Sheridan on 18/08/2019 Reviews 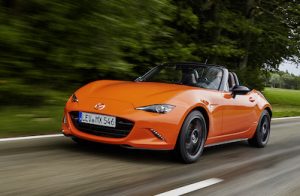 There really isn’t a lot to say about the Mazda MX-5 that hasn’t been said before. It’s fantastic! I have said many times before the MX-5 is the best Euro for Euro car you can buy – so I’m a fan. The two seater sports car was launched in 1989 in Chicago to a rousing reception. Since then the rear wheel drive petrol powered car has become the world’s best selling sportscar reaching over 1m sales in 2016. We’re now on the fourth generation (2015) and Mazda is celebrating its anniversary with a limited edition run of just 3,000 cars. 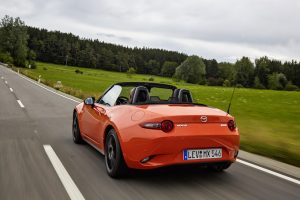 Bright gloss orange is the striking colour used for the 30th Anniversary. It is available in roadster or RF retractable hard top guises. The 30th features racing alluminium wheels and orange Brembo brake calipers that not only look the part but work well too. The MX-5’s long bonnet and rear set cabin is reminiscent of a Ferrari California and the rag top roadster and RF retractable hardtop models offer slightly different styles. Year round the RF makes more sense in our damp climate but the classic roadster is the reason the MX-5 exists. The car delivers smiles buy the mile and the old school sportscar like driving experience is simply fabulous. 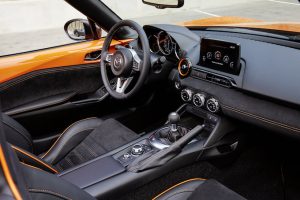 Inside the cabin there are a few extra touches. Recaro leather sports seats with orange stitching and liberal use of alcantara offer added value. In keeping with MX-5 anniversary model tradition the 30th gets a unique gloss paint colour, Mazda calls it racing orange. The 10th anniversary MX-5 was innocent blue mica, the 20th aurora mica blue while the 25th featured soul red premium metallic. I’m not sure how popular the colour will be in border counties in July particularly, but it is a glorious sight. Mazda says the colour is inspired by the sunrise. 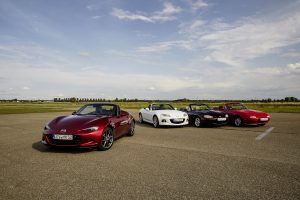 The 30th is based on the current model and is fitted with the most powerful engine namely the 2 litre 184hp/205nm four cylinder. 0-100km/h takes 6.5 seconds. The new engine meets the Euro 6d-TEMP standard with emissions and produces 155g/km of CO2. The engine delivers lots of grunt and fun at legal speeds. You really do not need any more power than this in the car. The MX-5 is all about balance and having raced MX-5s in international endurance races and even on a frozen lake inside the Arctic Circle I can confidently say that Mazda has it cracked with the wonderful MX-5. 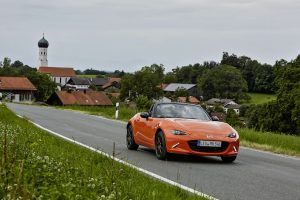 On the road the MX-5 is a hoot. The steering is precise and beautifully geared. The gearbox is a masterclass in slickness and functionality. The one tonne car is utterly engaging and one of the few that rewards the driver for taking an active part in driving. The MX-5 delivers a great sense of connection to the road – it would have to as it is set so low down! The driver simply has no choice but to become part of the car and this is truly joyous. At any speed the MX-5 can entertain. On the autobahn we cruised at 200km/h with little fuss (top speed is 220km/h). Roof up the cabin is quiet enough for year round use and roof down well the soundtrack is the classic wind in the hair motoring all drivers love. A limited slip differential is standard on the rear wheel drive two seater and this helps reduce wheel-spin on the unloaded wheel. 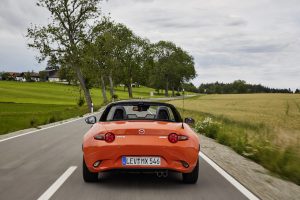