Trending
You are at:Home»Reviews»Mazda2 review
By Michael Sheridan on 12/04/2020 Reviews 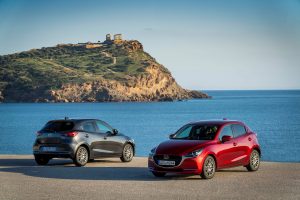 Updated to deliver an exterior that blends in even more with the current crop of handsome Mazdas – the little Mazda2 has big appeal. Competition this year in the small car class is fierce and with many brand new models can the 2’s mid-life facelift of the 2015 version keep it near the top of its class. 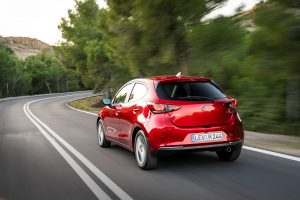 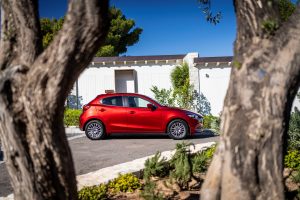 Mazda2 is a handsome hatch, particularly in Mazda’s famous ‘Soul’ red paint. Its proportions look spot on and its silhouette could be used for the entire supermini class. Interior space it about average for the class. The boot holds a modest 255 litres and the rear seats can accommodate two adults and there are seat belts for three.The cabin is quieter as greater attention has been given to reducing NVH levels (noise/vibration/harshness). The headliner for example is thicker. The front seats have been redesigned to keep the pelvis more upright to maintain the natural S curve of the spine. 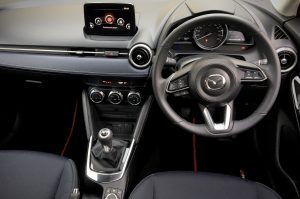 It is snug in the back. I sat behind my front seat and needed to splay my legs a bit despite the fronts seat’s relatively thin seat-back. The cabin is functional and the driving position is similar to many rivals. The trouble is the dash design and styling is quite dated next to the all-new kids on the block e.g. 208, Clio and Corsa. The Mazda user interface is something buyers need to learn as is not as intuitive. Our top of the range test car had a couple of USBs in front of the gear lever but the stowage area where you’d place a phone is tiny -smaller than most smartphones. 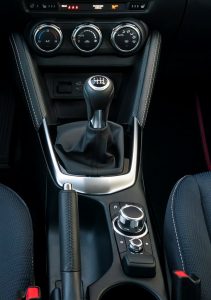 Mazda’s connectivity system can be a whole lot better if you upgrade to the connectivity pack for €640. This supports Apple CarPlay and Android Auto. A heated steering wheel and auto dimming rear view mirror are available. The 2’s dash is dark, functional and uninspiring compared to Peugeot’s 3D cockpit in the 208. 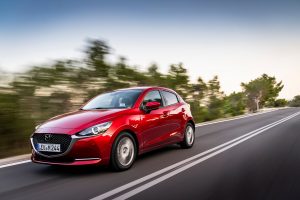 Power comes from a 1.5 litre SkyActiv-G direct injection engine, the G stands for gasoline – there is no diesel option. Two outputs are available from the non turbo petrol four cylinder engine: 75hp/135nm with a manual gearbox or 90hp/148nm with a choice of man. or auto. Our test car is the more powerful 90hp version in manual guise. Powerful is not really the word even in our more high powered 90hp test car. When pushed the front wheel drive car can threaten the speed limits thanks to its relatively low kerb weight of just one tonne (1,025kgs). 0-100km/h takes 9.8 seconds and top speed is 183km/h. 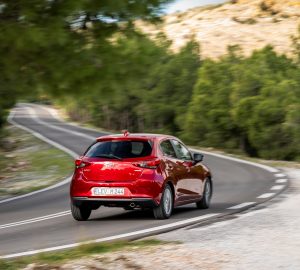 Mazda’s ‘M Hybrid’ mild hybrid system (MHEV) aids engine efficiency and helps reduce CO2 emissions also to a sub 100g/km figure – 94g/km (NEDC 120g WLTP) for the 90hp version. Average fuel consumption s quoted at 4.1L/100km (57mpg) NEDC (5.3L WLTP). The auto is slower and thirstier. The mild hybrid system replaces the starter motor with a starter/generator and the electricity used to operate it comes from a small rechargeable battery that gets its energy from regenerative braking. The Mazda2’s stop/start function works seamlessly and is hardly noticeable in traffic. 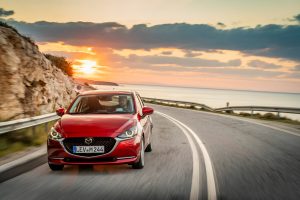 On the road to make good progress you need to use a heavy right foot. Most would expect a 1.5 litre to deliver more urge but the unit is surprisingly sluggish especially at lower speeds. Pick up feels lazy but smooth. The upside is acceptable fuel economy and reduced emissions. Shifting down gears is something you will do more in the Mazda2 than you would in many rival machines. I back to back tested the 2 with a 100hp Peugeot 208 with an auto gearbox. The PSA car was much livelier and economical too. 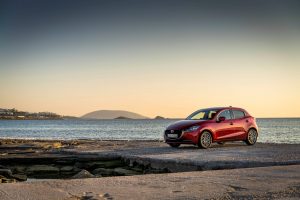 Mazda2’s ride quality is good, reasonably composed and borderline dynamic. The Mazda2 features the classic, unspohisticated small car/supermini suspension layout of MacPherson struts up front and Torsion beam axle at the back. The shock absorbers/dampers have been retuned slightly. Mazda’s ‘GVC Plus’ technology enhances corning performance and is a sort of ‘yaw’ control. G vectoring plus control uses the brakes to aid stability when exiting a corner by braking the outer wheels slightly. Overall the 2 can be fun to drive on twisty routes once you keep the power up. Mazda has always been good when it comes to driving dynamics. 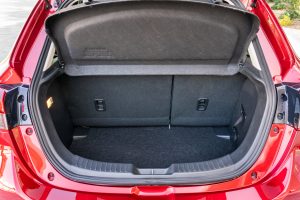 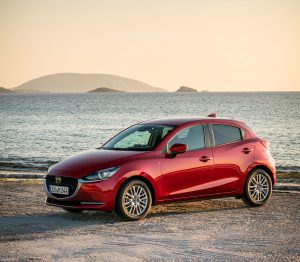 Here’s the rub – I’m often asked to recommend secondhand/used superminis and the Mazda2 is always one of my default suggestions. Most buyers in this class do not want to drive the nuts off their car and simply want a smart looking car that does what it says on the tin. In this sense the Mazda2 delivers.