Trending
You are at:Home»Reviews»Mercedes-Benz B Class review
By Michael Sheridan on 29/04/2019 Reviews 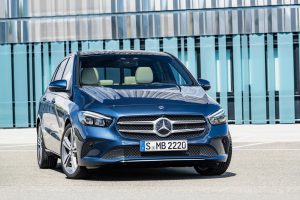 A tall functional hatchback… Oops sorry I nodded off there for a moment. Despite all its practicalities its a car type that will never find its way on to a bedroom poster. The much maligned five seat MPV still has a place offering sense and sensibility. The third generation B Class has been given a complete makeover and now features a lot of new driving technologies and safety systems. 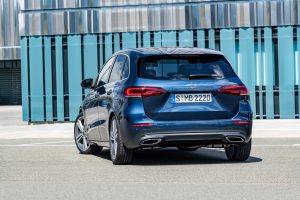 Yes it is still wrapped up in an odd body form but there is a lot going for the 4.4 metre long car. The B Class is compact on the road but very big inside and this is its key selling point. The rear bench can slide too and once you are in the cabin the ambiance is premium. More than 1.5m sales have been recorded since its launch in 2005 and over the years the B Class slowly evolved – up to now. Mercedes-Benz says its focus groups made up of existing customers stated their number one desire was for a more dynamic look, okay the jury is out on that one. Inside the changes are dramatic with the new dash layout representing the cutting edge of interior design at Mercedes-Benz. 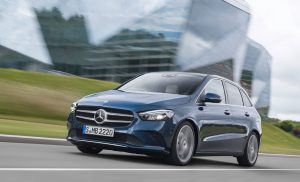 The B Class is an MPV or sports tourer (cough) as Mercedes calls it continues with the boxy form. In a world gone SUV crazy the B Class looks out of place with only the equally utilitarian BMW 2 Series Active Tourer for competition. The new B Class gets a slightly longer (30mm) wheelbase, lower roofline and a wider stance. Like modern Mercedes there is a choice of conventional or AMG styling kits available that alter the grille’s appearance and a few other bits and pieces. The three grade structure mirrors A Class with style, progressive and AMG Line. The B Class still looks tall and a little under-wheeled. The body overall looks a little awkward despite hints of the old Mercedes-Benz R Class MPV. The five seat hatchback has never been a volume seller in Ireland with annual sales of circa 150 units, in a full year sales of 200 are expected. Mercedes admits that in Ireland the car’s core following would be made up of mature buyers. 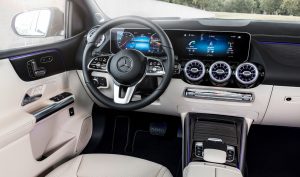 The new shape is slippery with a best in class aerodynamic cd figure. Full LED headlamps are now optional to enhance night driving.
Inside the cabin of the Rastatt plant built car the B Class goes further than the A Class with a new take on its impressive dash layout and its MBUX multimedia interface. There is also a high tech centre console and touch pad, a head up display, plus a bling multifunction steering wheel from the A Class (via the S Class). Literally next to the outgoing B the new car delivers gasps of amazement, and to be honest the technology just might confuse the life out of anyone who favours a blue rinse in their hair. The new B Class takes all the technological gizmos available in the new A Class such as its “Hi Mercedes” voice function and puts it in front of an MPV audience. A new large single piece frame houses the display screens. Depending on the grade the frame is filled to varying degrees by displays and this frames the dash area. 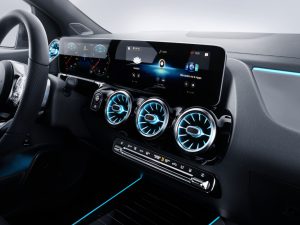 Most MPV drivers just want to get their human cargo from A to B but the new B Class will have passengers giggling in amazement. For example the MBUX augmented reality navigation system uses live camera views with superimposed direction arrows to give real time driving directions on the centre screen. Lane departure warning and emergency city stop are standard but many of the more exciting driving aids are optional or grade dependant. The B Class is the first compact model to feature energising comfort control. This feature can link to a user’s wearable tech and can be used as part of a wellness programme. The front seats also feature energising kinetics that allow the chair automaticaly adjust to the occupants body to deliver optimal seating posture. The rear Seats split 40:20:40. The rear floor has a raised transmission tunnel making the centre seat only suitable for a child. 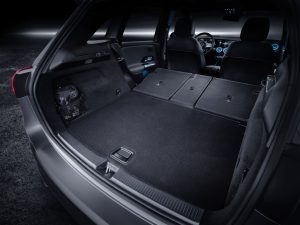 There is an optional electronic opening boot (button, key or leg kick operated) that opens the boot to  reveal 455-705 litres of cargo space depending on rear seat position. Under the adjustable height floor is a tyre inflation or mobility kit. Seats down and there is 1,540 litres of cargo space.

Diesel power is still the prime choice of Ireland’s Mercedes buyers according to Fiona Fennell, Marketing Executive at Motor Distributors Ltd. The Euro 6d compliment engine range is already ahead of the emission standard’s mandatory introduction in 2020. Initially the range will comprise of B180 and B200 petrol models and B180d, B200d and B220d diesels. Other power sources including electrification will come in due course. 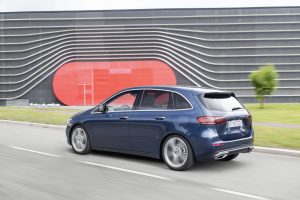 For low mileage users petrol power makes most sense. Both use a 1.332 litre unit pushing out either 136hp and 200nm or 163hp and 250nm. Petrol emissions are low ranging from 124-129g/km CO2. The B180d uses a 1.461 litre four engine with 116hp and 260nm. At the car’s European launch the 2 litre four cylinder did a perfectly adequate job of hauling the car about. The higher powered 220d develops more power with 190hp and 400nm but in back to back testing we preferred the 200d as it seemed to suit the driving characteristics the B Class imposed on us. Initially the range and gearbox options will be limited with manual and other models joining production later in the year. A 7 speed DCT (dual clutch) and new 8 G-DCT (200d and 220d) will be the prime transmissions. Standard suspension will feature with optional sports suspension (stiffer springs and dampers) and active adaptive damping the range topping suspension. Our test cars were fully equipped cars with adaptive suspension and 8 speed G-DCT auto gearboxes that delivered a premium albeit unexciting driving experience. Once you can take your eyes away from the staggering amount of technology available on the widescreen digital displays the B Class is a very easy car to use. The steering is geared well and is nice and light. 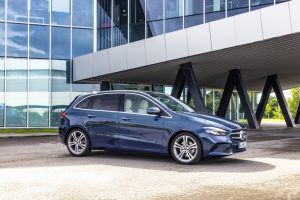 The high-ish driving position offers up great forward vision that is similar to a crossover SUV. All doors open wide and the seat hip height is something that older drivers will appreciate more that the ‘Youngsters”. The car can hustle along but when cornering body roll will act as a natural speed limiter. Adaptive cruise control and a host of other assisted systems make the B Class a car that will take care of its occupants more than most in an emergency.
The B Class may be a niche machine but it has a very loyal base of customers.