Trending
You are at:Home»Reviews»Mercedes-Benz EQC400 review
By Michael Sheridan on 12/07/2019 Reviews 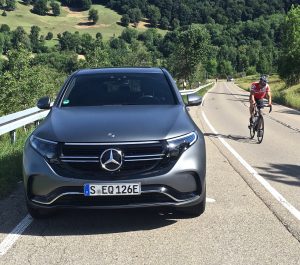 Silky smooth all wheel drive power delivery makes the new Mercedes-Benz EQC a premium mid-sized SUV, the fact it is an EV just adds to the appeal.

The EQC uses the same platform as the GLC SUV and as such can be built on the same production line. In this way Mercedes-Benz can be flexible in production and react to demand in a cost efficient way. This is a more sustainable way to grow its EV business and reduce costs, which it can pass on to consumers. 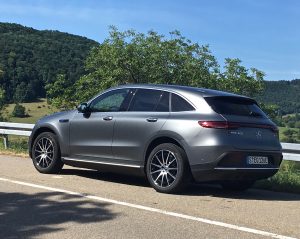 Under the bonnet you won’t find an internal combustion engine rather a 150KW (201hp) electric motor for the front wheels with another 150KW motor neatly packed away to drive the rear wheels. Both motors push out just over 400hp hence the name EQC400. There are no plans for any other power output version on the C platform. The five seater is a heavy beast as the big rechargeable battery pack located between the two axles weighs 650kgs alone. Mercedes build its own batteries close to it assembly plants dotted around the globe as logistics more so than ecological reasons make it a more senseible thing to do. We went to Stuttgart to test the EQC prior to its launch in Ireland later this year. 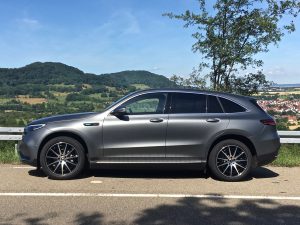 The exterior has subtle design features to point out its different from a GLC and of our two test cars the matt grey more than the white looked very sharp and smart. A conventional fuel flap conceals a combo/CCS charge plug sockets but otherwise the SUV looks like, well, an SUV! 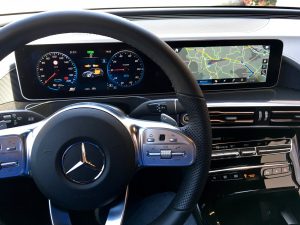 Inside the cabin is pure new generation Mercedes with the latest MBUX interface, ‘hey Mercedes’ voice interaction, augmented reality navigation and of course there’s a dominant widescreen dash display. Unlike many EVs the EQC almost hides its electric credentials and you have to dig deep into menus to find the nerdy EV info stuff – you really can get in to the car and pull down on the right hand side steering wheel stalk to engage drive and off you go. 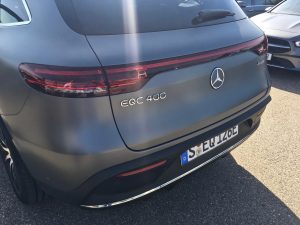 On the road the EQC’s is brilliantly rapid. Its ease of use is ridiculously simple and to say its effortless is literally the truth. 760nm of torque is a huge amount of pulling and it more than compensates for the car’s additional weight. A single gear propels the car forward with real gusto and keeping up with fast ICE cars on the autobhan was no problem. Imagine a powerful smooth petrol engine with a slick auto box and compared to the EQC’s power deliver it would feel like a tractor.

I was able to cruise with ease at over 180km/h with the car reluctant to go much higher – it is its listed top speed after all! 0-100km/h takes just 5.1 seconds and I can confirm that. The navigation talks to the regenerative braking and will apply regen. braking when approaching stops and descending hills but only when you lift off the power. Paddle shifters allow you select the amount/strength of regen. braking i.e. that doesn’t use the friction brakes (brake pads). Sailing mode (freewheeling) is the lightest followed by D, D- through to D – – that slows the car significantly. Another interesting point and advantage the EQC has over engined (ICE) rivals is that it has a fluid-free micro ESP traction control system. This means it can get information to the ECU quicker than in a conventional ICE powered car with a fluid based ESP system and react accordingly quicker. 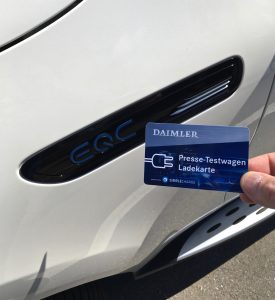 The battery pack is a 80kWh unit so on a home EV charger it will need more than overnight to fully charge just all large capacity battery EVs. You’ll need to keep topping up at home to ensure you have the maximum range available quoted between 445km – 471km. In conjunction with home charging or work charging popping on to a fast or rapid charger is always a good idea. The EQC’s navigation will set out a journey factoring in where to charge and for how long to complete your journey. 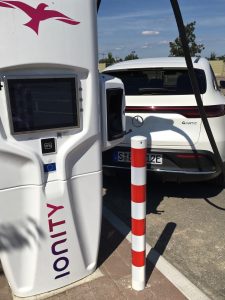 On our test we hooked up to a motorway services located Ionity charger just outside Stuttgart. Ionity chargers are capable of delivering up to a very powerful 350KW rapid charge. The EQC’s maximum charge rate is capped at 110KW, still seriously fast, and from a 30% charge after about 30 minutes we had 80% capacity. The official MB figure is 40 minutes to go from a 10% to 80% charge at an Ionity charger.

In 2020 Mercedes-Benz Ireland expects to sell 50 EQCs but I think that figure could be higher despite the asking price of circa €90,000. It is dearer than the excellent Jaguar iPace but cheaper than the Audi e-Tron. 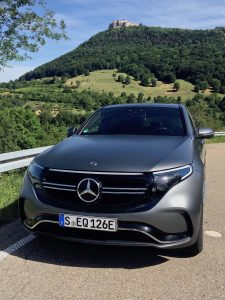 The Mercedes-Benz EQC 400 is a joy to use and a brilliant quiet cruiser that existing owners of petrol or diesel SUVs will find easy to migrate to. Its weight is only noticeable when cornering quickly or when driving with enthusiasm on twisty roads – otherwise it is brilliant!