Most mild mannered news people have an alter ego. Clark Kent was a reporter at The Daily Planet but he was perhaps better known as Superman. The Daily Bugle had Peter Parker taking snaps when he wasn’t spinning webs as Spiderman. For one day only I’m releasing my alter ego – Wheels. 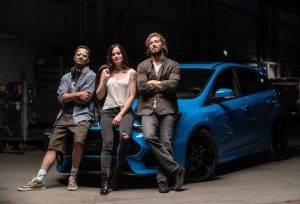 I’m in London at a industrial area near London City airport today on the premise of writing a story for the paper but it’s a cover for my real motive. The boss of my old crew, Carston, was framed by his best friend, a real nasty piece of work. Carston spent five years in prison for a crime he didn’t commit. Now, he’s out, and it’s payback time. A heist is on the cards and getting everyone out alive is all down to, well, me. I shouldn’t be telling you this but I’m really a world class getaway driver. The odds are stacked against us however and I will have to use all my experience to burn off my pursuers. Tyres will screech and rubber will burn. Can I do it? I’m not sure, it’s been a while. 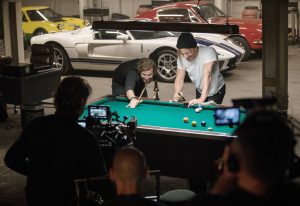 Sounds like a reasonable premise for an action movie and it is, sort of. As part of a very cool Ford of Europe promotion due to start in October, the blue oval brand is letting a limited number of paying customers live out their movie stunt driving fantasies. £99 gets participants a four hour session on a movie set with some of Hollywood’s best as the crew. Not only do they get to drive some fast machines playing the character Wheels but they also get a full movie trailer as a keepsake – but only if they manage to lose their tail. The big budget trailer is of course a lot cheaper to produce than a full movie but the ingredients are the exact same. There is an abundance of stunt vehicles on hand, over a dozen, along with cameras everywhere from the dashboard to jib arms and of course the obligatory drones for the aerial shots. 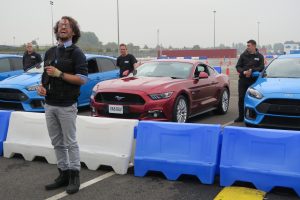 The Ford GoFaster event features a brilliant cast of actors who play the roles of the various film crew kitted out with the obligatory headsets and walking talkies. There’s on site movie catering and even the classic double decker dining bus. The movie’s stars are on hand too and unlike many stars will actually interact with you. The interplay between cast, crew and participants is hilarious and a hoot to play along with. Ford stresses GoFaster was conceived to be more than a driving event but a memorable experience. To its credit the blue oval brand delivers on its promise. As a driving event it is an adrenaline rush and not for the faint hearted. Participants get to drive in a way they’d be arrested for normally but the opportunity do carry out some high speed precision stunt driving in controlled conditions is something you really can’t pass up. 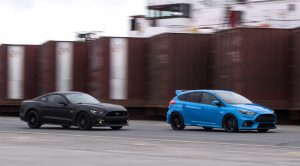 The vehicles are of course highly credible fast cars. The hero car is a 340 horse power Ford Focus RS and the screen idol Ford Mustang V8 is driven by the bad guys. On set participants learn some classic Hollywood stunts, taught by professional stunt drivers who are all part of Paul Swift’s crew. 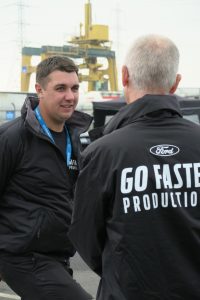 Paul Swift is perhaps the best known stunt driver in the world having been the man behind Top Gear live and countless movies. When training is completed its then lights, camera, action as the participant’s new found skills are put to the test.

I got to be the Guinea pig for the event and although they never said it to me directly they clearly needed a devilishly handsome (ahem) journalist to volunteer play the role of Wheels. I’ve been in front of camera a few times before and am used to hitting my mark but hitting my mark in a high powered Focus RS while being chased by a professional stunt man would be a challenge. The lavish film production would certainly be a new experience. The mechanics of the movie trailer are straight forward. A number of elaborate scenes are already shot and cut with professional acting cast. The scenes I’ll be shooting will be cut and inserted in to the storyline. All I have to do is not mess up. 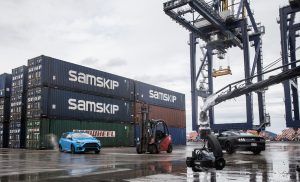 At the various stages of the event the cast would outline what was happening and guided me along. I received instruction on four of the stunt driving basics: A handbrake turn into a parking space, high speed drifting, a J turn and a shakedown circuit time trial in a V8 Mustang coupe. The shakedown included a combination of slalom and drifting around cones. The all wheel drive Focus RS has a drift button that allows the car lose traction when you provoke it with violent acceleration. In drift mode  the RS behaves almost like a powerful rear wheel drive car. With tons of torque and rear wheel drive the V8 Mustang was a whole lot of fun, and incredibly simple to boot and hurl around. I had one of Paul Swift’s instructors by my side at each stage as I mastered (cough) the techniques needed. 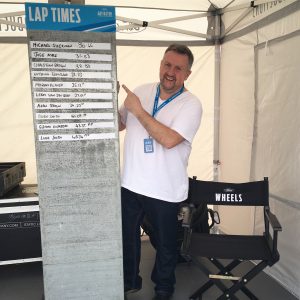 I surprised myself by recording the fastest time ever for the shakedown – seriously.

Then it was off to wardrobe before I had to do it for real for the cameras. A bomber jacket and driving gloves, you’d have to, were donned and I went to my RS to record the various moves that would be mixed in to the trailer. First I did a J turn with the RS that I started up and slotted in to reverse gear. With the car pointed straight and only my right hand on the steering wheel at nine o’clock, I reversed up to about 50km/h and simultaneously dipped the clutch and turned the wheel to three o’clock. As the car slid around I engaged first gear without stopping and powered away having turned 180 degrees, phew. Then I had to drift around a camera while trying to look cool as a cucumber… eh, drift yes, cool? Sort of. Next I stopped briefly to set my sights on a cone that was my mark to pull the handbrake and do a 180 turn. On completion I was to look at the camera beside my door. Somehow I managed that too. Finally I did a few cheesy looks to the dash mounted camera that should earn me a lifetimes supply of Kilmeaden cheddar.

With the driving part completed it was time to do the acting bit. I was sweating from the pressure and my heart still beating hard in my chest I had to pose for the movie poster, not a good idea, and now I have a lovely poster featuring a hero who looks one beat away from a heart attack. Finally I did a couple of tiny live action sequences in the production’s mobile studio.

The Director was brilliant, as he was wonderfully comical and the place was full of laughter when I as Wheels was meant to be delivering smouldering looks to camera, I know I’m laughing at the thought too. An on site edit suit that would shame our national broadcastor was full of editors working away with the footage to deliver my own personal movie trailer in jig time. 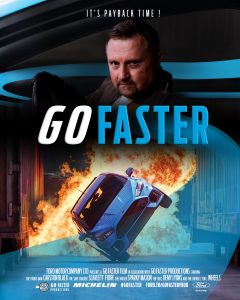 The end result you can see be

low. It is a wonderful piece of escapism. My method acting like close ups and incredible driving skills (cough, thanks Paul) slotted in to the edit effortlessly and the result is worthy of an Oscar. I had a ridiculous amount of fun and customers no doubt will love the experience even more, and that is exactly what Ford wants. After the UK, the event moves to just a couple of other European locations and sadly not Ireland. The London event starts on October 13th and runs for 10 days. Then it moves to Madrid and finally Paris before it is put to bed. Paul Swift is an impossibly nice guy and gifted driver and his crew are brilliant teachers. There are some places available as I write on ford.to/GoFasterFBUK. Participants need a full drivers licence to take part.

So Wheels lives to drive another day. Now my skills are honed – bank job anyone?