Trending
You are at:Home»Reviews»MINI Clubman Review
By Michael Sheridan on 04/09/2016 Reviews

Nostalgia isn’t what it used to be. I remember the original Mini well, and of course being a self respecting motoring hack of a certain age have owned one or two. With the Alec Issigonis designed car owners enjoyed an ultra compact, fun machine that they could also maintain and service themselves. Modern cars these days simply don’t allow such a tactile relationship. Today if you interfere with your car it will virtually call the Cops on you if you dare to even look at the engine bay! With all the diagnostics electronic ECU dark arts in machines today modern cars are getting more like Hal everyday… “What are you doing Michael?”. That said modern cars are so well built and packaged we hardly, if ever, need to lift the bonnet. 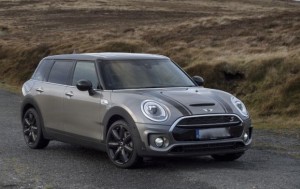 BMW’s MINI is anything but mini. MINI Clubman is in fact the largest MINI currently being built at 4.27 metres long. MINI is massive next to a classic 1959 Mini and while it hints at the revoloutionary titchy British car new MINI (officially spelt in Caps.) is a premium car with a premium pricetag built with BMW expertise.
I’ve been testing one of my favourite MINI models this week, the practical five seat Clubman – the spiritual successor to the almost one meter shorter Mini Traveller/Countryman estate. The first MINI Clubman (2007) was a five-door estate built with European and American markets in mind. The boot had two cool doors and the passenger and driver got a door each but tragically the single rear passenger door was positioned on the wrong side of the car – behind the driver. The rear-opening door was cool but and the layout worked great if you drove on right hand side of the road – but in Ireland and the UK it meant that drivers had to get out each time to let rear seat passengers out – a total pain in the backside. The second generation MINI Clubman now cares about us on this side of the pond too as it has six doors including four full size doors. The five seater is a relatively big bus. Apart from the six doors, air blades at the front bumper with vents to the rear of the front wheels are the most obvious exterior body feature. Clubman sits on a long wheelbase and is a cleverly packaged machine.
Inside the cabin overall is bigger than the outgoing car and a good deal wider. Yes all of the cool toggle switches and premium points of contact are evident and these do a good job of letting you know that you are in a quality bit of engineering. The split floor boot is a useful 360 litres and the cargo area is expandable to 1,250 litres with the seats down. Is Clubman as much fun and as direct to drive as the hatchback model? It is fun but is not as sharp as the three or five door hatch models. The greater gap between the front and rear wheels +100mm makes Clubman deliver a more comfortable and less choppy ride, so it is a better family machine.

Petrol power ruled in the last century and Mini managed quite well with its volume selling 850cc and 1000cc engines. If you were power crazed the 1275cc flat faced Clubman (1969-80) was the hot hatch of the day. Our test MINI is a Copper D and it has a 1995cc diesel engine that pushes out 150hp and delivers 330nm of torque. 0-100kph takes 8.6 seconds. An optional 8-speed auto gearbox is available too. 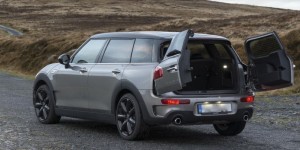 I really like the Clubman, but what became incredibly clear during my time with the big Clubman is that there is room in MINI’s range for a city car sized ‘Mini’ MINI. Exits to sharpen pencils!