Trending
You are at:Home»Reviews»Mondeo Hybrid review
By Michael Sheridan on 20/04/2018 Reviews 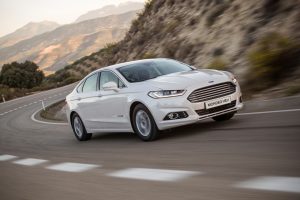 Late to the party, Ford brings petrol/hybrid power to Mondeo. Priced aggressively from €32,745 the five seater Titanium and €35,280 for the range topping Vignale, the Mondeo HEV (hybrid elctric vehicle) offers a lot of bang for your buck.

It’s both an odd and pleasant experience to get behind the wheel of a Mondeo that has a petrol engine providing most of the car’s 187hp. Diesel power is king in this sector in Ireland as business users, who buy the bulk of Mondeos, can reclaim the VAT on the oily fuel whereas they cannot with petrol. When you compare like for like the hybrid is significantly cheaper than the diesel to buy. The hybrid’s emissions are low at 91g/CO2 and this will be quite appealing to some buyers. The impressive pricing is due to initial Ford Ireland incentives on top of government grants. Its fleet managers that will decide on the hybrids success and that will be down to the numbers stacking up. 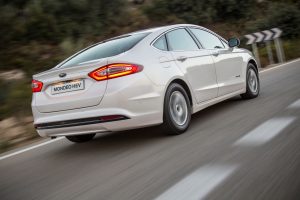 The Mondeo hybrid has been out a number of years and I drove it then at its launch. My feelings about it were again confirmed at its Ireland press launch this week. Like nearly all hybrids there is a CVT automatic gearbox that delivers seamless gearshifts (because they’re aren’t any) to the front wheels. The CVT can sound annoying under power but the petrol engine’s relative quietness next to a diesel makes up for it. The Mondeo HEV gently wafts along and is effortless to use. The Vignale impressed as it was really comfortable with great seats, plenty of creature comforts and overall felt premium for the asking price.

So what’s there to not like? The only real trade off with the saloon is the loss of boot capacity. Golfers beware, multiple bags won’t fit due to the positioning of the rechargeable battery pack behind the rear seats. The boot is still big enough for the weekly shop. 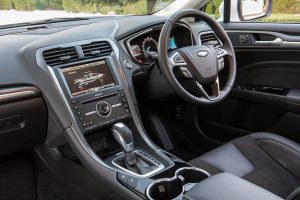 Electrified car owners, especially early adopters like to have some control over how their hybrids work but with Mondeo HEV you have nothing to do bar monitor how the power is being distributed via Ford’s ‘Smartgauge’ dash interface. The HEV Mondeo gets a center-placed analogue speedometer with screens either side, and of course Mondeo’s centre dash screen is present. The Mondeo HEV uses Ford’s third generation hybrid system. Two electric motors are used: one adds to the engine’s power output while the other charges up the 1.4kWh lithium-ion battery pack. As you’d expect with a hybrid regenerative braking features. Ford says the HEV can do up to 135 km/h using electricity power alone. Average fuel consumption is a diesel beating 4.2 L/100km (2 litre diesel auto 4.8L/100km). 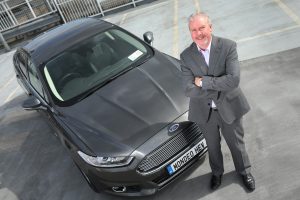 “As this is the first hybrid vehicle launched by Ford in Ireland, this is an important step for us”, said Ciarán McMahon, Chairman and Managing Director of Ford Ireland.  “With its legions of fans in Ireland, Mondeo is such a great model to offer with HEV capability. We are sure that Mondeo HEV will meet the needs of customers who are looking for a more environmentally-friendly car but who do not want to compromise on space, driving dynamics, driving range and comfort”.

Ford is on a big push to deliver more electrified vehicles to the global market (13 new or partial EV by 2020) and there’s even a Mustang HEV on the way.

When it comes to electrified cars Ford Ireland has been cautious, tending to watch and slowly follow the market rather than leading the push. Having missed the feeding frenzy for new 181 car sales in the first quarter, Ford Ireland expects modest sales of circa 200 Mondeo hybrids next year.

And yes you did read correctly, there will be a hybrid Mustang – Sacrilege!!!