Trending
You are at:Home»Reviews»New BMW 5 Series launch
By Michael Sheridan on 27/05/2020 Reviews 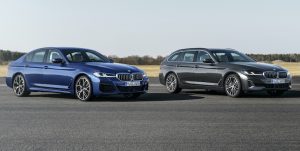 During lock down while people have been painting houses and doing the odd job or two about the house or in the garden but BMW has been busy too. The premium German brand has been tweaking away at its range. We flew (virtually) to the BMW’s HQ this morning for the Munich firm’s global press launch of its near-iconic executive cruiser the 5 Series and its sporty sibling the 6 Series GT.

Refreshed exterior styling catches the eye but there are noticeable improvements to connectivity, driver assistance systems and engine efficiency also. The bulk of the mid-size five seater’s engine range (4 and 6 cylinder) now come with a 48 volt mild-hybrid tech. This reduces emissions and increases efficiency. A new M Performance ‘M550i’ xDrive takes its bow with the refreshed 5 for those who want great autobahn performance without the M5’s hardcore thrills. The ’Touring’ (estate) version will come with plug-in hybrid technology (the PHEV is due in November) and some subtle styling tweaks. 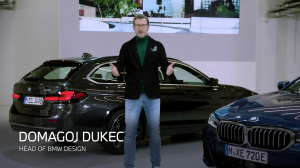 Domagoj Dukec brought us through some of the highlights of the design and only car nerds will notice them all – this is a good thing in the quite conservative class as German brands in particular don’t like to upset existing customers with radical mid-life facelifts. The 5 Series front gets a wider grill (now as wide as we thought it might!) & new ‘laserlight’ headlights with their 600 metre light range (cost option). The rear design got Dukec’s attention also. The M Sport package remains the sporty and more aggressive styling choice but for the shrinking violets the standard SE luxury line car keeps its head down and is a little understated. Dukec drew particular attention to the new 20 inch ‘Air Performance’ M Sport alloys and yes they are particularly smart. The revised Touring’s prominent tweak is LED tail lights. 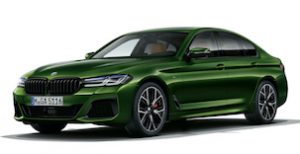 In the cabin there is a larger 12.3 inch centre dash display. Lots of tech is available thanks to BMW’s advanced OS7 operating system. BMW’s. BMW’s voice interaction set up is upgraded and improved (Intelligent Personal Assistant). Connective parking features too and over the air remote software upgrades keep the car at the cutting edge of its class. ‘BMW Maps’ is the new connective navigation system with cloud based navigation that BMW says rises to the challenge of the best external smartphone apps. The new 5 Series gets the latest camera and radar-based driving assistant systems, that facilitate features like steering and lane-control assistant and active cruise control. 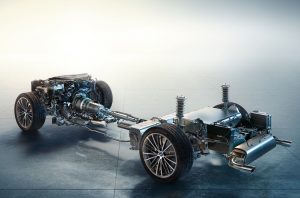 Some buyers adore this tech whereas others just want a car that makes them feel good… the 5 will continue to deliver both experiences. BMW told us that customers want more electrification and this has been addressed with the facelift. BMW now has 13 electrified vehicles on sale globally. This generation 5 Series is an important car for BMW with sales in excess of has 600,00 globally since its launch. The face lifted 5 will be built in Bavaria (Dingolfing) and in Graz, Austria by Steyr. 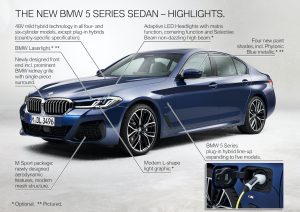 BMW says the new 5 delivers ‘a great driving experience with low emissions – our customers demand nothing less’. At Motorhub Towers we’re looking forward to testing this claim. For now we can say the 7th generation 5 Series redesign may appear quite subtle but in fact is quite significant. The new range launches in July this year.