Trending
You are at:Home»News»New KIA Sorento
By Michael Sheridan on 18/03/2020 News 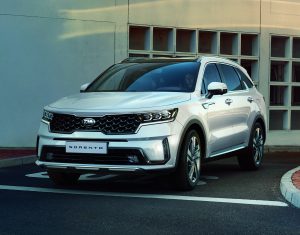 The new KIA Sorento SUV has been revealed for the first time today. KIA says the fourth generation of the big car is “powerful, progressive and versatile, designed and engineered to take on everything life throws at it.”

The Soreneto gets a new platform and a host of ADAS systems. Under the bonnet we can expect hybrid and plug-in hybrid powertrains. Also there is improved levels of comfort. Off road ability is helped with a new terrain mode with the all wheel drive system.

KIA says: “Raising standards in the midsize SUV class for space, efficiency and quality, it sits at the heart of KIA’s reinvigorated global SUV line-up, which also includes the Seltos, Stonic, Telluride and Sportage.”

Emilio Herrera, Chief Operating Officer for KIA Motors Europe, comments: “The Sorento’s evolution over the last 18 years echoes that of the KIA brand as a whole. While the car was initially launched in 2002 as a utilitarian all-terrain vehicle, the fourth-generation Sorento has been transformed into something altogether more desirable. It is an important model for KIA, particularly now that it also represents the first use of electrified power in our flagship SUV.”