Trending
You are at:Home»Reviews»Nissan e-NV200 Evalia review
By Michael Sheridan on 18/01/2018 Reviews 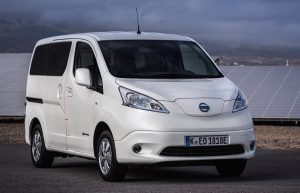 Spring 2018 will see the arrival of the new second-generation e-NV200 electric van from Nissan. Its range has been improved by 100km and now the machine looks like a really viable option for small businesses to invest in as an urban delivery van or shuttle service. 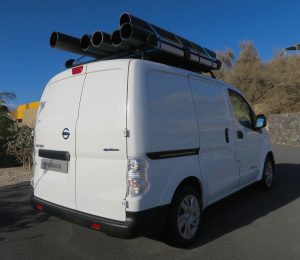 Vans are a vital cog in turning the wheels of business. In our towns and cities everything arrives by road and ultimately is distributed by vans. With the current focus of pressure groups and regulators heavily on urban air quality the time seems right for electric vehicles to step forward. Nissan Ireland in a couple of months will launch the e-NV200 electric van into the Irish market and we’ve driven it.

The e-NV200 played second fiddle to the new Leaf at Nissan’s European dual launch in Tenerife but is a very significant machine in its own right. Built using the running gear that underpins the new Leaf the e-NV200 may look big but it is at 4,560mm its shorter than a Nissan X-Trail (4,690mm) or Ford Galaxy (4,848mm). 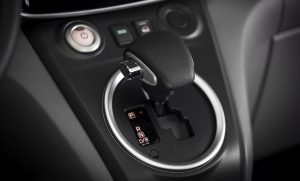 As its an EV it is powered by a simple electric motor coupled to a has a CVT automatic gearbox. Driving it couldn’t be easier and will be appreciated by those who have to hop in and out of their vans frequently. You can get some energy back using the ‘B’ selector on the stubby gear selector lever. When engaged it allows the electric motor to do the braking – in a similar way to holding a conventional engine in the same gear to slow down. The B setting also allows the driver to recoup energy to the on board and larger 40kW battery pack (was 24kW) to a greater degree than just lifting off the throttle. 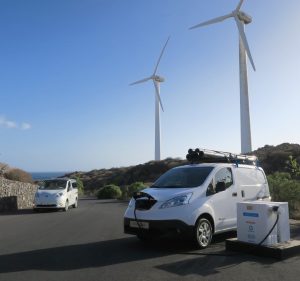 Exterior styling is pretty much irrelevant with vans but handsome looks can help a private owner/driver enjoy their vehicle – sadly the Nissan is a bit plain looking and form has definitely followed function. But looks can be deceiving as when you hit the road the EV van is brilliantly simple to use and pleasant to drive simply thanks to its electric drive-train is so quiet.

The e-NV comes in two body styles namely a panel van or passenger shuttle. The van has a load capacity of 4.2m³ – that is enough for two Euro pallets or cargo weighing up to 701kgs. The van can also tow a small load (410kgs) or take 100kgs on the roof. The front passenger seat can fold flat too to aid loading long loads. 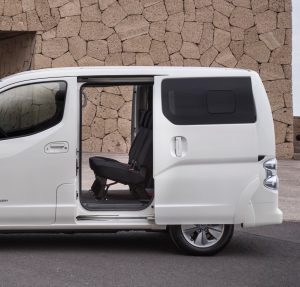 My test van was a seven-seat ‘Evalia’ people carrier. Up front there is plenty of room while in the middle row the seating is cosy for three adults. The furthermost seats fold in a practical albeit ugly way but overall as a shuttle this version is really impressive. The passenger version is also wheelchair friendly, so Ireland’s taxi drivers should seriously consider this machine. The simple ease of use is the key to Europe’s most popular electric van (in truth there aren’t that many to choose from). Since 2014 Nissan has sold 15,000 but with the new version I expect greater things for the Japanese brand. 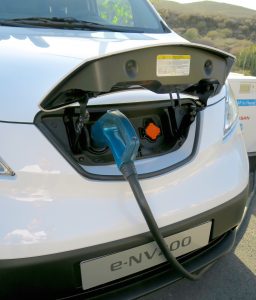 The range question is always the first asked and using the soon to be mandatory stricter WLTP testing the e-NV200 will do a combined range of 200km but in the city this rises to 301km. Under the current (no pun intended) NEDC test the range is given as 280km. Remember electric cars and vas pay nearly no penalty in stop start driving – when they’re stopped they’re pretty much off and using almost zero energy. Using air conditioning and other electrical consumers will affect range but in the city most users should have enough power on a daily basis. Where permissible the e-NV200 can act as a mobile power-bank and give electrical power back to a building or the grid when plugged in to the appropriate box using Nissan’s innovative Vehicle to Grid technology.

Without doubt the e-NV200 should be on the shopping list for An Post, taxi drivers and also families looking for a seven-seater EV who aren’t that style conscious. While there is no Ireland pricing yet the passenger e-NV200 will be a hell of a lot cheaper than Tesla S or X – the only other EVs on the Irish market you can order with extra seats for more than five people. 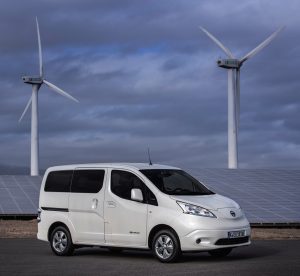 On the road the drive experience of the circa 109hp/254nm 1,689kg (van-1,558kg) machine is a remarkably calm one. Compared to a regular diesel van the e-NV is a quiet oasis. The electric motor and gearbox makes only a whisper of noise and the ride quality is quite good too. 0-100km/h takes 14 seconds but its low speed acceleration is more impressive than the sluggish 14 seconds suggests. 123kn/h is the top speed and no that’s not a typo the e_NV200’s top speed is just above the legal motorway limit at 123km/h. As for optional toys? A colour reversing camera, intelligent key and bluetooth connectivity are available as is an integrated sat nav. The ‘Nissan Connect’ app allows users to precondition the interior while the vehicle is hooked up to a charge point via their smart phone – very handy on cold mornings. The app can also keep track of how efficiently the vehicle is being used. Private owners and fleet managers will like this feature. 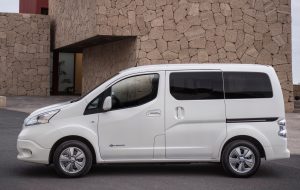 The e-NV200 is a really smart alternative to the classic diesel van and points to the future for city delivery vehicles. The passenger Evalia is no oil painting… but boy is it practical.