Trending
You are at:Home»Reviews»Nissan Juke review
By Michael Sheridan on 07/10/2020 Reviews 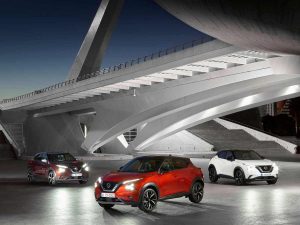 The small ‘B’ SUV sector is awash with great offerings this year. We first reviewed the Nissan Juke, a former Irish Car of the Year,  a year ago in Spain at its international launch http://motorhub.ie/nissan-juke-review/. This week we’ve been testing the new Juke ‘Coupe Corssover’ on Irish roads. 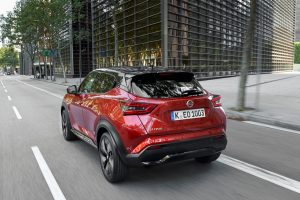 Its ten years and over 1.5m sales since the Micra based crossover was launched. It won our hearts and awards back then as it was quirky and fun. Attitude is so hard to find in cars and when it occurs with a small car you have to love it. The Juke is built on the same excellent (CMF-B) platform that underpins the latest crop of Alliance small cars and crossovers (e.g. Renault Captur/Clio). The Juke’s exterior has evolved and thankfully remains as individualistic. This is a good thing but shrinking violets may think otherwise. The car’s front end has been modernised with Nissan corporate grille and LED lighting but the dna of the original is there. Its round eyes have been tweaked and the front end looks more assured. Juke’s bonnet and flanks get the subtle creases and you can see how the stylists have added a bit of muscle to the five door’s body. Our ‘N Design’ test car is quite sporty looking with big alloy wheels and a nice bit of attitude. The revised rear looks sharper too and the boot is a good for class 422 litres and it has a split level too. 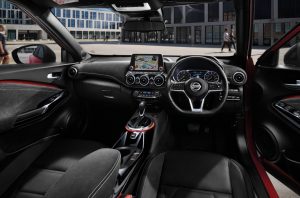 Inside the cabin is refreshed and while utterly contemporary appears quite conventional when compared to the new Peugeot 2008 – again not everyone loves Peugeot’s interiors (although we do). Space is better for passnegers and there is less of a step over to get in to the Juke as there is in the 2008 – you really have to lift you legs to get over the French car’s high sill. The Juke’s interior is a big improvement on what was a funky interior 10 years ago. The quality of fit and materials is a big step up. There are some nice highlights of coloured trim that lift the otherwise dark interior. SVE grade buyers can get the optional BOSE pack. It features head restraint speakers among others and is a nice touch (it is standard on N Design models). Connectivity is updated and at its launch was lauded as the Japanese brand’s most connected car yet with over the air update ability using dual data SIM tech that features for the first time. Also a host of ADAS aids are available with the new platform. Our N-Design test car also gets a technology pack: AVM, ProPilot (LKA, ICC, TJP), Blind Spot Intervention, Intelligent Driver Alertness and Rear Cross Traffic Alert. The Juke a five star performer too at Euro NCAP tests. 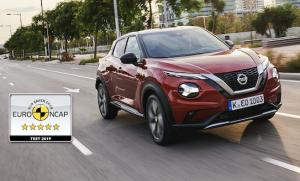 Engine choice is limited to a 1 litre petrol DIG-T engine. It is a powerful and impressive unit with 117hp/180nm that replaces the old and less efficient 1.6 litre. 1 litre petrol engines are very popular in this class. The Japanese brand should be envious of the PSA Group that is already delivering multi fuel rivals to the market including EV versions like the Peugeot 2008e. A plug in hybrid PHEV Juke is on the cards in the not too distant future. Manual and automatic (DCT) transmissions feature with the 1 litre Juke. The driving experience is involved and precise. 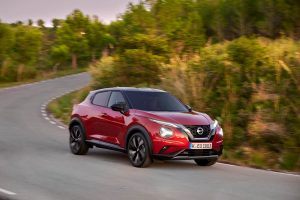 Our N-Design featured quite weighty steering and went where it was pointed without fuss. Our car had a selectable ‘D-Mode’ driving modes which seem unnecessary in a not overly powerful car. The Juke’s compact dimensions married well with its good, driver-centric driving position. The Juke lets you be a little cheeky behind the wheel and it has no trouble keeping up the flow of traffic. Nissan’s ProPilot semi autonomous driving system is available with the DCT auto option and for higher mileage users it should be a consideration in what remains a very price sensitive end of the market. 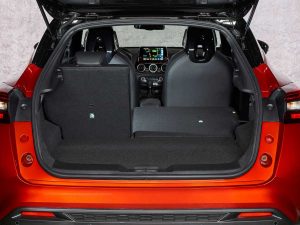 “The Nissan JUKE has never followed the crowd. Instead it leads the way, with its big personality,” said James McCarthy, CEO, Nissan Ireland. “The new model builds on everything people love about the JUKE with a new athletic design and enhanced on-the-road experience.” The Nissan Juke has five grades. Pricing starts from €21,995 (XE), SV from €23,650, SV Premium starts at €24,250, SVE and N-Design both start from €26,950. 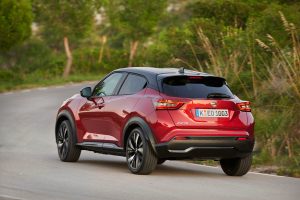 The Sunderland built Nissan Juke will grow its 1.5m global sales (c. 10,000 in Ireland) even further with the new Juke. It has buckets of connectivity, tech and a fun personality.