Trending
You are at:Home»Reviews»Nissan Leaf review
By Michael Sheridan on 17/01/2018 Reviews 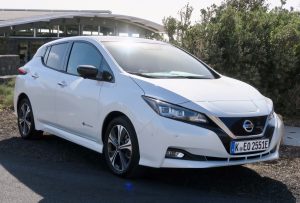 In 2010 Nissan launched its first all electric Leaf in to Europe. Over 300,000 have been sold globally in its seven years, and 84,000 of those found homes in Europe. The second generation Leaf has had its international launch and we’ve driven it.

The volume family hatchback sector is light in terms of electric vehicles and Leaf has pretty much had the market to itself. The Leaf not only leads sales charts in its sector but it is also the biggest selling EV you can buy. The Renault Zoe, Volkswagene-Golf and Hyundai’s Ioniq Electric currently provide its only serious competition. So no pressure on the new Leaf to stay ahead of the game. We went to Tenerife to test the second generation machine before its Irish launch. 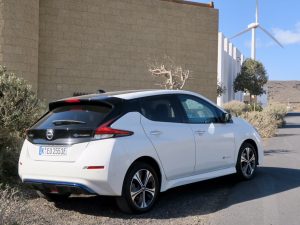 The Leaf is the biggest name in EVs in Ireland but the actual sales numbers are relatively tiny at less than 400 last year and about 2,000 in total including personal imports. Overall the EV sector accounts for less than 1% of sales in the new car market. The government in the last budget made it very tempting for businesses to buy and EV allowing a 100% accelerated capital write down for business buyers of up to €24,000 in the first year – while also setting a 0% rate for the employee’s BIK (benefit in kind tax)… So Nissan Ireland says this year we will see a significant jump in EV sales.

Late last year I went to Japan for the global reveal of the second generation Leaf and came away impressed at its promise and improved looks. Now in early 2018 I’ve been driving it to see if it lives up to the hype.
Nissan says Leaf is an acronym for Leading, Environmentally-friendly, Affordable, Family car. Pricing will be finalised shortly but one thing we know for sure is that the Sunderland built machine has almost single handedly democratised electric family motoring.

The new model gets a new body that is far more conventional looking than the challenging outgoing car. The Leaf looks so much better thanks to sharper styling that was penned to appeal to European taste. 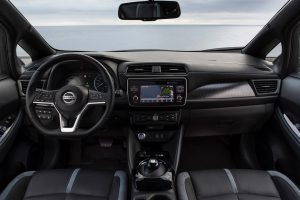 Inside the spacious cabin has been made over and now looks quite contemporary but the best new is the improved driving range thanks to a bigger battery pack. The new 40 kWh battery (the bigger the number the better) delivers an acceptable real world range that should allow commuting without having to charge up during the day. Two charging sockets continue to feature under the bonnet flap including a 50kW Chademo fast charger. The funny thing with EVs is that they perform better in stop start low speed city traffic than on the open road. Motorway driving literally sucks the electricity out of an EV whereas the stop start nature of urban traffic is taken in its stride. Under the new and stricter WLTP testing rules (mandatory from later this year) the new car has double the range of the original Leaf. Nissan quotes 270km on the combined driving cycle – the cycle that is most forgiving to conventional ICE engined cars. In urban use the Leaf’s range actually rises to a 415km. Under the present NEDC testing (a shorter and slower test than the WLTP) the new car is still impressive with a driving range figure of 378km. 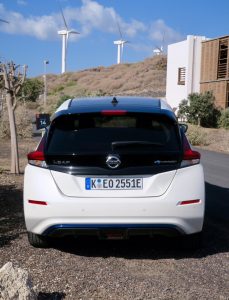 So what apart from the bigger battery helps new Leaf deliver this impressive range? Improved aerodynamics and a low drag figure play their part. A new flat underfloor, that produces no lift, helps too. Nissan’s engineers (1,100+) have been obsessive, even tuning the car aerodynamics for side winds where they were able to gain 2.5km in cruising range.
0-100km/h in the new Leaf takes a brisk 7.9 seconds – but it feels even quicker thanks to the instant torque of the electric motor. Pulling power is up from 254nm to 320nm and power is up too from 107hp (80kW) to 147hp (110kW). In percentage terms the new Leaf has 38% more power and 26% more torque. The body’s torsional rigidity has seen a 15% increase, the car’s centre of gravity has been lowered by 5mm plus new and thicker stabiliser bars have been fitted. 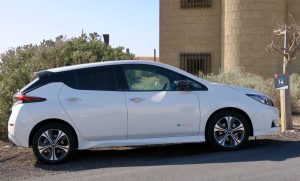 Near level three automation features with Nissan’s optional ‘ProPilot’ although it lacks the lane changing ability of pure Level 3 machines. New Leaf will adaptively cruise and stay in its lane with autonomous steering intervention when the steering wheel button activated ProPilot system is active. In slow moving traffic the system allows Leaf to come to a complete stop and move off again (if under 3 seconds stationary). A press of the cruise control ‘res’ button will get the car to move off again is stopped for a longer time. I used the system on the main roads of Tenerife and it worked well although on a particularly windy day the automated steering was reluctant to activate at times. 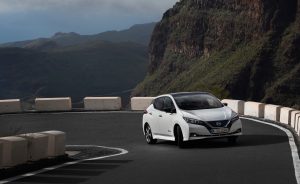 On the road the Leaf features a more sophisticated ride with a retuned suspension set up. The larger cabin is refined and very quiet thanks to liberal use of sound deadening materials including rear wheel arch carpeting. The steering is improved and tuned. About town it’s great lock to lock performance is noticeable (was 32 now 2.6). The Leaf can be hustled along effortlessly and can go head to head with other compact family hatchbacks in terms of acceptable driving dynamics. The new Leaf can also handle flooded roads (always a worry with electric cars) just like conventional hatchbacks thanks to a 300mm water level wading ability. According to a senior Nissan insider the figure is a conservative one. 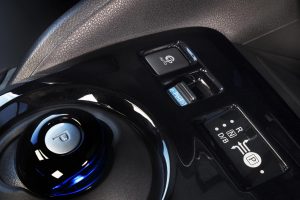 The best bit of tech on the new Leaf is the ‘e-Pedal’ accelerator. The accelerator can obviously make the car go but also slow down when the e-Pedal button is activated. When you lift off the accelerator completely (e-Pedal) the car applies a good amount of braking force itself, which would be about equal to a firm press of the brake pedal and the car will come to a complete stop. In general use when lift off slightly the car applies up to .2g of braking. So in real terms you may hardly need to press the brake pedal again! The brakes lights activate in the normal way and are designed to be triggered sensibly so they do not come on with every slight pedal lift off. The e-Pedal works brilliantly and when you think about it also aids safety too as the car starts to slow the instant you lift off the throttle. Driving with the e-Pedal on is like having good old fashioned engine braking under your right foot. Up a twisty mountainous road I had a good giggle at the sporty progress I was able to make. The familiar ‘B’ button EV and hybrid drivers know well is still available to use but I didn’t need it as the single pedal operation and simplicity of driving the new Leaf worked so well. 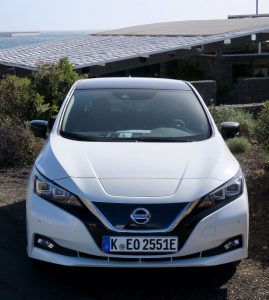 ProPilot Park is Nissan’s autonomous parking feature is new too and it uses the car’s 12 sonar sensors and four cameras to manoeuvre into parking spaces (parallel & perpendicular). There is even a manual space selector for those odd parking spaces.
The grade structure in Ireland starts with XE, rises to SV, then SV Premium with SVE the range topper.
Connectivity is superb with the availability of Apple CarPlay and Android Auto and of course Nissan Connect. The Nissan app allows, amongst other things, owners to precondition their car’s interior using their smartphone while the car is still plugged in to its charger. A host of driving aids that are available on the most modern machines are also available with new Leaf. 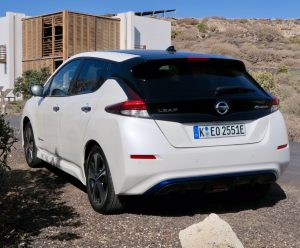 The new Leaf is the best EV in its class. It looks so much better than before and while the Volkswagen e-Golf may be more elegant the Leaf leads the way with better range and that brilliant e-Pedal.