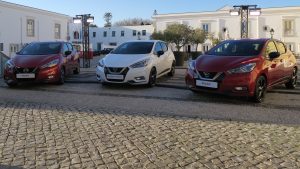 In 2016 Nissan launched its fifth generation Nissan Micra. The little car bore no resemblance to the much loved but often lampooned Micras you’d see outside the bingo hall or with L plates on the motorway, opps sorry! Joking aside, since 1982 the compact five seat machine has delivered dependable and economical motoring to Ireland’s drivers. The front wheel drive car’s low price and ease of use were always strong points but it was never a looker. 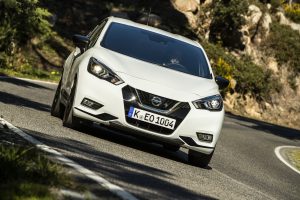 The Micra’s current design is striking and a far cry from the tall, curvy and utterly bland India built Micra it suceeded. Nissan could and some say should have used the radical departure to change the name but ultimately knew the moniker was a cashcow not ready for the slaughter house. For 2019, a couple of years shy of its mid life make over Nissan has added two new engines, an Xtronic automatic option and the latest version of Nissan Connect. The Micra range starts from €17,195 for the XE grade 1 litre IG three cylinder manual petrol model. It pushes out an adequate 71hp that is hard to fault in urban use. The more interesting Nissan Renault Mitsubishi alliance 90hp ‘.9’ litre has been dropped and is replaced with a brand new and very clever turbocharged 1 litre that develops 100hp. The new IG-T engine will feature in many Alliance machines but debuts in Micra. A five-speed manual gearbox is standard and a new stepped CVT auto version is available for a premium. The engine develops 160nm of torque from 2750rpm and has an NEDC CO2 figure of 103-105g/km. Fuel consumption is an impressive 4.5-4.6 l/100km. 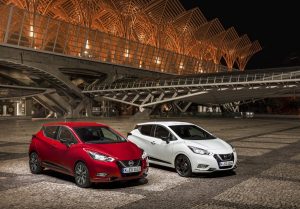 A host of impressive engineering advances feature in the Euro 6d-Temp compliant engine. Spray coated cylinders, first seen in the high performance GT-R, make cylinder liners redundant. Nissan told us an engine has a life of circa 400,000 kilometres and so with Micra there should be no need to rebore cylinders and fit new liners. The compound sprayed in the cylinders reduces friction aiding heat management and reducing emissions while improving fuel efficiency. A clever new exhaust manifold works more efficiently with the turbo charger. Split cooling helps reduce emissions, fuel consumption and excess heat generation. The new lighter engine does away with a belt-tensioner too, thanks to a new elasticated accessory belt. On the road this unit is a perfect match to the nimble and surprisingly dynamic Micra. The car can hold its own at motorway speeds and pulls strongly too. The cabin is hushed and long high speed motorway runs are stress free. On twisty mountain routes the Micra delivers more than you’d expect. 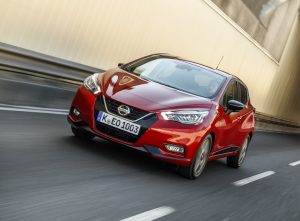 Another more powerful 1 litre petrol unit is offered and its origins come from the co developed Daimler 1.3 unit used in the Qashqai. The three cylinder shares the same engine block as the IG-T but is utterly different in its engineering after that. The DIG-T features direct injection and delivers a lively 117hp and 180nm of torque (from 1750rpm) with a further 20nm of over-boost available. The direct injection produces 250bar of pressure that is very high for a petrol engine. A close ratio six speed gearbox helps hustle the car along briskly. It is a second quicker from 0-100km/h at 9.9 seconds but feels quicker than that. A delta cylinder head, central injector set up, turbo with electronically controlled waste gate, electric turbo actuators and GPF petrol particulate filter contribute to the compact unit’s power. The DIG-T has an NEDC CO2 figure of 111-115g/km and a consumption figure of 5.0l/100km. The DIG-T engine powers the new N Sport model and is a lot of fun.

On the road the 10mm lowered N-Sport’s DIG-T performs better than 117hp would suggest. The car is a fluid nippy machine that remains composed even when a high percentage of its performance potential is being used. The Suzuki Swift Sport is a similar machine and a heap of fun but our high grade test cars delivered a more premium feel. 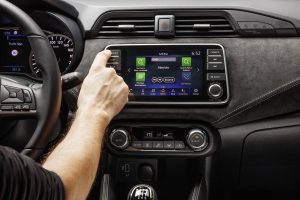 An alcantara dashboard insert among a few other sporty touches delivered a nice premium feel. Do you need the N Sport? No, and even with its slightly quicker steering rack and tweaked suspension the 100hp Micra is fun enough. This six-speed manual warm hatch won’t be a big seller in Ireland due to the expected price premium and will be available by special order only. 17 inch alloys, chrome exhaust tip give the visual game away. All Micra engines feature stop/start. Will there be a hot hatch Micra to rival the Fiesta ST or Volkswagen Polo GTI? Nissan says no as the market is circa 4 per cent for these types of machines. Pure electric has been ruled out to but electrification or some sort was not ruled out or in for that matter. 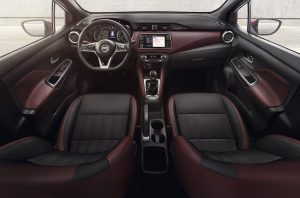 The arrival of an automatic Micra comes after a two year gap. The self shifting gearbox represented 20 per cent of sales of the fourth generation model in Ireland and is expected to reach 30 per cent of sales in Europe by 2022. The new CVT gearbox is very impressive. While continuously variable transmission gearboxes are acknowledged as more efficient they can be disconcerting to drive. The nature of their power delivery generates a sound similar to a slipping clutch and is as painful on the ears as fingernails scratching a blackboard. Under the banner of D- step technology Nissan has place steps in its CVT that deliver a faux gear shift feel. When you press hard on the accelerator the car appears to shift up through gears like a regular auto. Under heavy acceleration you will here an initial CVT whine but the note then changes pitch as it shifts to the next faux gear. It also delivers a down shift sensation too. Nissan’s new CVT box is the best in class and for driving dynamics outshines the Toyota Yaris Hybrid’s CVT. As with most autos torque or pulling power is down slightly at 144nm compared to the manual version, but don’t be fooled it is no slouch. The best compliment I can give the Micra automatic is that it feels as good as be damned like a regular automatic. 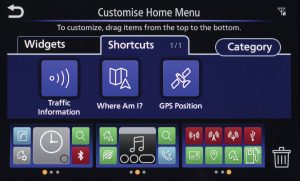 Nissan lays claim to class leading connectivity with new Micra. A seven inch dash mounted display houses a new pinch and zoom touch screen. From the level two grade up there is CarPlay and Android Auto integration. The Micra’s TomTom navigation now features the premium traffic service with live updates on traffic flow. There is a new single line search function, personalisation options, voice recognition, a find my car feature, live over the air update capability for maps and software, a door to door navigation smartphone app is downloadable and it facilitates greater phone/car interaction plus you can even plan trips on your phone and seamlessly transfer them to the car’s system… so there will be no excuse for missing the whist drive… sorry. Nissan Europe says buyers will get three years worth of free updates. 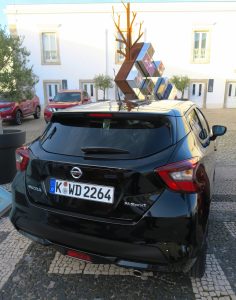 The existing 90hp dCi 1.5 diesel Micra remains available in other markets but is dropped from the Irish market where diesel sales in the sub compact sector are next to non existent. The manual 100hp 1.0T price has not been finalised but the 1.0T CVT automatic starts from €19,995 (XE grade) and it is available from the end of the month in XE and SV grades. The 1.0T manual will join the range towards the end of the year as will higher grades of SV Premium and SVE.

Nissan Europe over the last two years has seen a 21 per cent increase in new Micra sales representing a 0.7 per cent share. Conquest sales are high at 65 per cent. Helen Perry, general manager, small cars, Nissan Europe, said: “With a greater focus on efficiency and performance, these new models further broaden the appeal of the Nissan Micra. We are now in a position to better meet the needs of Europe’s compact hatchback customers.” As for Brexit concerns, Nissan told us has had a presence in the UK since 1986 and will continue with its operations. Make of that what you will. 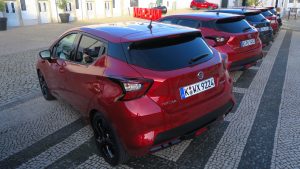 The Nissan Micra is an excellent machine that is now very desirable. Nissan Ireland expects to sell 2,200 Micras in Ireland this year.