Trending
You are at:Home»Reviews»Nissan Micra review
By Michael Sheridan on 11/01/2017 Reviews

It’s fair to say Micra drivers love their cars. The little hatchback has been a perennial favourite in Ireland since its launch in 1983. Micra’s affordability, ease of use and low running costs have been key ingredients in the compact Nissan’s success story. 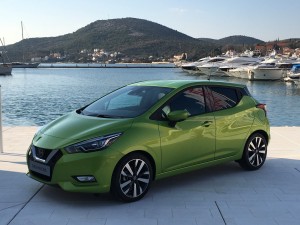 Countless young drivers have started off their motoring careers with the front wheel drive car and it is equally adored by more mature owners. Micra has always been functional but never desirable… until now!
The latest generation Micra will land in Ireland in April and we’ve been testing it.
The fifth incarnation is a radical departure from the conservative looking Indian built budget machine that came on the scene in 2010. For a start the new car is built in Europe for more demanding buyers. Micra gets a massive makeover and now looks as good as any rival in the highly competitive supermini/small car sector. This little hatch easily gets top marks for progress but as the last Micra was at best ordinary is new Micra good enough to top its class? 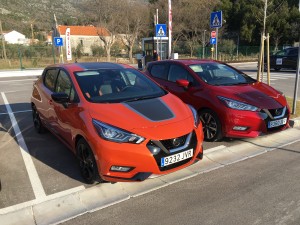 On the outside it is clear that the designers have taken a real pride in its appearance. Micra has more curves and creases than anything in the class and in the flesh the impressive five door hatch looks very smart. The sleek body sits squat on the road – yes I’m talking about a Micra, and it’s aerodynamic too with a 0.29cd of drag.

The biggest change is the new platform. Nissan has used the CMF-B platform that is shared with its alliance partner Renault in its Clio. In fact new Micra is built in the very same production plant as Clio in France.
A host of new driving aids are available depending on specification like auto emergency braking, pedestrian detection, lane departure warning and a 360 degree surround view. There is even an optional €500 Bose the hi-fi system… in a Micra! Apple CarPlay is available from launch but Android Auto users will have to wait with no date set yet for its introduction. The cabin is much more refined and you can really enjoy the cool sound system that has a wonderful surround feature that includes speakers in the head-restraints too! Okay our test cars were high specified SVEs models that will cost more than most Irish motorists would expect to spend on a budget hatchback but with new Micra the car is being repositioned in the mid to upper part of the sector. Micra will go head to head with Polo and Fiesta. 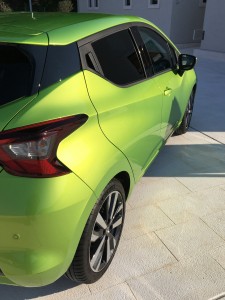 The five seater also uses the Renault/Nissan/Mitsubishi alliance’s engines with Ireland’s expected big seller to be a 75hp 1 litre petrol that starts production in March. On our test drives we experienced the three cylinder 90hp, 0.9 litre turbocharged petrol that will account for 20% of sales in Ireland and 90hp. Sadly on day two we were snowed in at our Dubrovnik launch base and didn’t get to test the 1.5 dci litre diesel – the first diesel Micra. The diesel is expected to account for around 5% of sales and would be ideal for high mileage commuters. 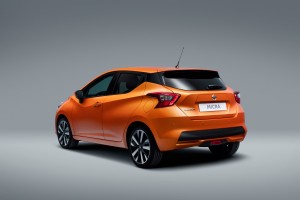 The three cylinder was a hoot and fun to drive – now that’s the first time I’ve ever said that about a Micra. Micra’s revised and better geared steering combined with its first ever electronic chassis control system makes Micra’s driving experience nothing short of a revelation. On large alloys with low profile Bridgestone rubber we drove with enthusiasm around the roads of Croatia. The ride was flat, quite firm and it encouraged enthusiastic driving. Now before traditional Micra buyers new to the idea of driving excitement decide decide to go elsewhere, on smaller wheels the standard car will be a more docile machine with a softer ride. 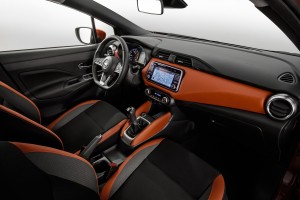 Inside, the dash is smarter and all our highly specified test cars were really well put together – as you’d expect. The cool styling does have a negative affect on rear access and passenger space. I struggled to sit behind the front seats and shoulder and head room were poor. 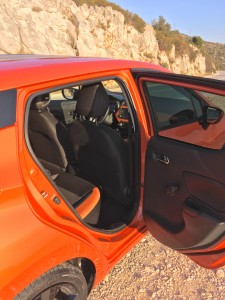 The rear door aperture is tight at best too so baby seats and those with less mobility might struggle a bit. The boot is modest at 300 litres but good for the class. Micra good looks have only one downside and that’s suffered by the rear seats passengers.
Nissan is dropping the Note mini-MPV from its range as it feels Micra is now big enough to do the job and far cheaper to produce that’s to its scale. Nissan Ireland says there are no plans yet for a sub Micra sized machine to do a job similar to Ka+ & Fiesta and serve both ends of the small car sector but I’m sure Nissan is watch Ford closely.

New Micra is a huge jump forward for Nissan and an impressive machine when compared to its rivals. In Europe Nissan wants Micra to be a top ten performer. Nissan Ireland expects to sell 2,000 Micras in 2017 due to its late arrival and in a full year in excess of 3,500. There are still some current Micras and Notes in stock and good deals to be had for budget conscious buyers. 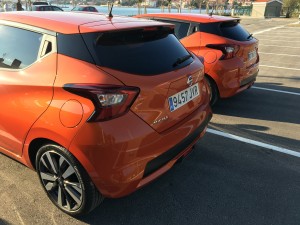 Pricing will start at €16,650 – so it is a clear move upmarket. Four grades will be sold starting with XE (rising to SV, SV Premium & SVE). There are a host of customisations available including racing stripes… for a Micra!