Trending
You are at:Home»Reviews»Nissan X-Trail review
By Michael Sheridan on 25/09/2017 Reviews 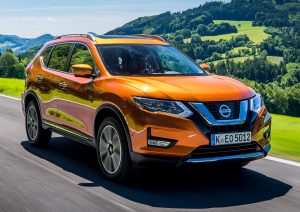 The third generation X Trail has been given a mild exterior makeover. A smart new grille, improved interior materials and some new gadgetry combine to freshen up Nissan Ireland’s large passenger car. Available in five or seven seat guise, the X Trail sits on a stretched version of Qashqai’s platform. The target market remains active families with older kids with tons of lifestyle equipment that seems obligatory if you look at any sales brochure. 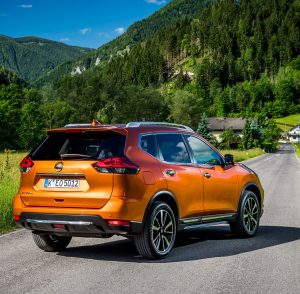 The X Trail is a popular machine with over 3.7m sold since the turn of the century if you include the US version the Rogue. Last year global sales topped 766,000 making it the world’s best selling SUV. In 2016, Ireland sales were more modest at 1,416 albeit up from 608 in 2015. These relatively small numbers are more to do with the X Trail sitting in the D-SUV segment and the abundance of cheaper C-SUVs that dominate the market like the Hyundai Tucson (7,425 sales in 2016) and Nissan Qashqai (4,591 sales in 2016).

The obvious exterior change to the Japan built X Trail is the smarter looking V motion grille. Harder to spot changes include redesigned headlights (led headlights are available with AFS cornering function) and new led tail light clusters. Depending on the grade, chrome blades feature on the flanks and there is a shark fin aerial on the roof to help distinguish new from old. Greater use of the car’s exterior colour has been part of the redesign and four new exterior paint colours are available. Revised bumpers explain the 50mm growth in the X Trail’s body length to 4,690mm. Compared to a couple of key 5/7 seat rivals the X Trail is just 7mm shorter than the highly rated Skoda Kodiaq and 49mm longer than the new Peugoet 5008. The X Trail is 296mm longer than the latest Sunderland built Qashqai and the boot is relatively cavernous as a result. 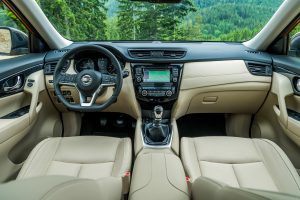 Inside the X Trail gets a nice new D shaped multi function steering wheel. The chunkier wheel rim has a heated option. More use has been made of soft touch materials around the dash in keeping with the current interior design trend to make once dull dashboards – sensual. In pictures the quality looks premium but it is less so to the touch. There are redesigned center air vents plus new padding on the centre console for knees to rest against on longer journeys. There is more space around the centre console too. The middle row seats get a new option of heating. Bose has made a bespoke audio system for the X Trail that is compatible with Apple’s CarPlay and Android Auto. It delivers a good balanced sound with excellent bass. Also new is a tan and black piping leather seating option. Our test cars were lacking in USBs, with just one up front. Most families need a small power station for their devices when they take to the road. 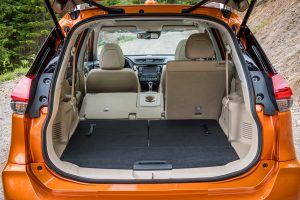 The big boot is marginally larger at 565 litres (five seat), a gain of 15 litres. The seven seat’s capacity is unchanged at 445 litres. With the seats down there is an impressive 1,996 litres of cargo space. A new remote hands free opening tailgate is available. A luggage board with up to nine configurations and tilting and sliding middle seats (+/-30cm) makes the X Trail a very practical load carrier.
Overall the majority of X Trails are sold as five seaters with just 40 per cent seven seat versions. This stat must give Nissan’s alliance partner brand Renault some comfort having only brought a five seat version to Ireland of its Koleos, the X Trail’s sister car.

Nissan is making a host of what it calls intelligent mobility technologies available in the new X Trail. Like new Qashqai the X Trail will be available with driver assistance systems such as rear cross traffic, stand still assist (auto hold), intelligent 4×4 – with multiple sensors, rotary dial controller. Upgraded intelligent emergency braking now features pedestrian recognition using a combination of a forward facing radar and a camera.
Nissan’s ProPilot autonomous driving function will come on line in the X Trail next Spring. ProPilot is based on three technologies – lane keeping assist, intelligent cruise control and traffic jam pilot. ProPilot is activated using a steering wheel mounted button and let’s the car control steering, braking and acceleration. We understand the system will work on both motorway and in the city. 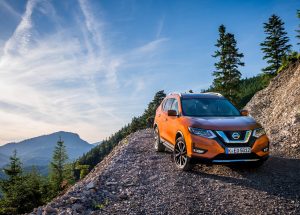 Two test cars were made available to us. A 2 litre all wheel drive diesel and a 1.6 litre front wheel drive only petrol. The turbocharged 1.6 litre petrol pushed out an impressive 163hp and delivered lively performance with very little racket coming from under the bonnet. The rise of petrol power is noticeable in smaller SUVs and crossovers but the X Trail remains a diesel powered machine for the Irish market. A 130hp 1.6. litre is the entry diesel and available in 2 and 4 wheel drive. All diesel versions can tow up to 2 tonnes braked. We drove on a mixture of roads in and around Vienna and as expected the X Trail delivered a smooth and comfortable ride. The long wheelbase soaked up the few road imperfections I could seek out with relative ease despite the large alloys on our high grade cars. With the sound system playing you can enjoy the drive but just like its smaller sibling this is a car to get you and from places without the urge to release your inner Lewis Hamilton. Nissan set up a section of mountain trail driving to showcase the X Trail’s AWD ability. In truth the dry lose surface course wasn’t that challenging – unless you had a fear of heights and driving on unguarded bends with steep drops. Just for giggles I did the course in two wheel drive mode with absolutely no problems. The X Trail has good ground clearance and all I needed to do was steer and maintain momentum. Unless you tow a horsebox the front wheel drive X Trail is the one to go for. A CVT Xtronic automatic gearbox is available. SV, SVE are the trim levels with optional equipment available.

The new X Trail needs to be priced to compete with the Skoda Kodiaq. The ‘Skodaiq’ starts from a very reasonable €28,795 (five seat) – the outgoing five seat X Trail starts at €29,995. The seven seat Skodaiq starts at €29,795 – only a grand more. The cheapest seven seat of the outgoing X Trail starts from €33,250, that is a €3,455 difference. Price negotiations for the new X Trail have yet to be finalised but Nissan Ireland will be very aware of Skoda’s aggressive pricing.
Nissan has dodged a bullet too with Renault’s latest offering the Koleos (from €34,490) that is only being sold in Ireland as a highly equipped five seater. Renault’s version of Qashqai – the Kadjar has been a sales hit so the decision seems a bit daft on Renault’s part. This decision has probably more to do with not to impacting on potential Renault Grand Scenic MPV sales. 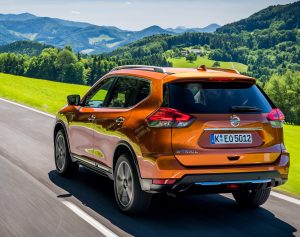 The X Trail is an easy to use and accommodating family car that delivers the added benefit of a high SUV driving position. Nissan has improved the X Trail but it falls short of the premium title the brand claims, but that said, the X Trail is still a very impressive machine.